Hoping to get in front of a growing interest in triathlons in the Portland area, the venerable Bike Gallery has opened Epic Tri Shop, a new store located in the upper level of their existing Beaverton location.

Although Epic Tri is in the same building as the Beaverton Bike Gallery, it will have its own bike mechanic service, separate from the main store. The new shop carries a variety of running, swimming, and bicycling gear. This past Wednesday was the store’s grand opening party. 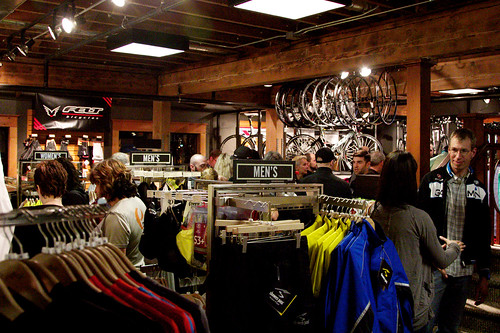 In addition to all the latest gear, Epic Tri will offer a series of clinics for triathletes. A major goal of the shop is to support triathletes of all levels and foster a stronger community around the sport.

The first clinic, scheduled for February 25th, will focus on triathlon basics like setting up a training plan and choosing the right equipment. The clinic is $15 for Epic Tri Club members and $25 for non-members.

If you’re not a dedicated triathlete, Epic Tri still has plenty to offer. They carry an extended offering of bicycling gear and when I stopped by the shop for the grand opening I noticed plenty of running gear that would be a nice edition to my closet even though I pedal more than I run.

While it doesn’t get much attention in bike circles, triathlon is growing (just head out to Sauvie Island on a sunny weekend and you’ll see tons of people in full aero position speeding around the loop). We’ve got the annual Portland Triathlon, the Hagg Lake Triathlon, and Athlete’s Lounge, a tri-focused shop located in Northwest Portland.

To find out more about Epic Tri, and to register for the clinic on February 25th, head on over to EpicTriShop.com.

I was there last night to pick up a new light, and Clue showed me around the new shop. Although I don’t do Tri’s, I was quite impressed.

Seems like a nice place and way closer to me than Athletes Lounge.

Will Specialized hit them with a Cease and Desist order like the li’l gal over at Sugar? hummm???

Make sure to offer clinics on how to properly transition from the swim to the bike!

Technically Jude contacted Special-Ed to ask about a possible conflict before she dumped $ into signage and ad materials, they didn’t proactively send here a C&D. I thought the same thing about ETS though, the Folks in Morgan Hill seem all too interested in “the principle” and all that jazz.

but do they carry frame treatments that are resistant to the urine and gu-squirts?

…see what I did there?

The link to EpicTriShop.com doesn’t work. It should be epictri.com.

I take that back. While the link doesn’t work, (yet?) the replacement one I suggested is not correct.