Bikes, Obama, and the State of the Union 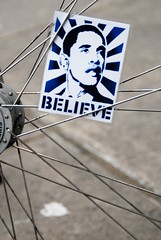 If you were writing the speech, what would you have him to say about biking and transportation?

Go ahead, suspend your grip on reality and imagine that transportation is a non-partisan issue and that bicycling isn’t a polarizing political football and favorite public scapegoat.

It’s not like transportation isn’t a hot issue. Just today Politico reported that House Transportation & Infrastructure Committee Chair Rep. John Mica is set to release text of a new bill this Friday with work on the bill to start February 2nd.

President Obama doesn’t even have to mention saving the planet, improving public health, or the myriad other benefits of driving less and biking more. He can tie everything back to the hottest topic of the day: The economy.

Many states, including Oregon, have simply run out of the money needed to maintain the old, highway and auto-centric mindset. The math just doesn’t add up. The amount of car use we currently have simply puts too much financial stress on our transportation system (maintenance, congestion, injury and loss of life), our health system (diabetes, obesity), and our eco-system (greenhouse gas emissions).

Obama could even take the Main Street angle, and mention less auto-centric transportation investments as a way to appeal to protect the pocketbooks of middle class America. According to the Bureau of Labor and Statistics, the average American household spends 15.6 cents out of every dollar on transportation costs — that’s second only to housing and over twice as much as people spend on healthcare: 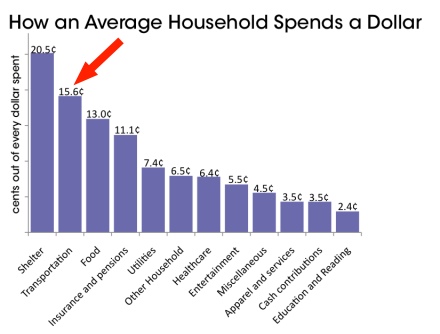 Take another look at the myriad charts and statistics (which come straight from the federal government) in that 2012 Benchmark Report I shared yesterday and one thing becomes crystal clear: What we’re currently doing isn’t working.

The Oregonian reported today that Obama’s speech will “make a case for fairness.” Ever since cars did a hostile takeover of American roads in the early 20th century, everything else hasn’t had a fair shake. A more balanced — and fair — transportation system, if framed correctly to the American people, could be a key part of Obama’s 2012 campaign.

My congressman, Earl Blumenauer (arguably the smartest guy on the Hill when it comes to bicycling), said via email today that he hopes Obama shares “a new national vision… to meet the infrastructure challenges of this century.”

If his speech were up to me, I’d make sure to start laying out that vision tonight; a vision of balance and fairness in our transportation policies so they offer true mobility for the middle class.

“It’s time that the entire country learned from what’s happening right here in Portland with mass transit and bicycle lanes and funding alternative means of transportation.”

If it were up to you, what would have Obama say tonight?

I would love to see him bring up the issue of declining gas tax revenue, but I realize that it is political kryptonite.

Perhaps he could frame it as: “The Highway Trust Fund is insolvent. Within the next few years, it will completely run out of money, due to declining revenue. We need to decide as a nation if we want to continue to build infrastructure or not. We cannot use deficit spending to build our highways, so we need to collect additional revenue for highway spending through user fees.”

Funny you mention raising the gas tax. I wouldn’t count it if I were. Did you catch the piece about the Obama memos in The New Yorker? Here’s an excerpt:

He also could be ruthless toward members of his party in Congress. When he was informed in a memo that Representative Jim Oberstar, a Minnesota Democrat, wanted to write a highway bill that included a hundred and fifteen billion dollars more in spending than Obama had proposed, and which would be funded by a gas-tax increase, Obama wrote “No,” and underlined it.

Another chance missed. No wonder I am inclined toward cynicism when it comes to federal government….

Let’s see what happens when it isn’t an election year. As I said, talking about gas tax increases is political suicide. We just have to hope that he goes after it if he gets re-elected. This chart illustrates the problem:

And that is without adjusting for average fuel economy. The real picture is much worse.

He has already said a lot of things… still waiting for the big improvement.
Sure, he’s better than the alternative, but just barely. A lame-duck administration is just that – and we have very little to show for 3 years. Rather than more promises of things he cannot deliver, I’d rather he works towards a restructuring of the government. Bring down the two party system.

‘Thanks’ to the housing bubble to pop that has brought this cost down for many…so perhaps we need the “transportation bubble” to pop for bicycles to get their fair due as a mobility tool.

But for this to happen the Feds have to really fail to keep subsidizing the autocentric lifestyle and transportation network. Doubtful for now.

“Bring down the two party system.”

When you support the lesser of two evils you are still supporting evil.

Given two options, evil as they may be, choosing the lesser of the two is just that; less evil.

Respect for catchy analogies (sound bytes) as reasoned arguments is one of many weaknesses of the human brain. Unfortunately, it’s also a backbone of political strategy.

I agree, a vote for the republicans is probably less evil.

In 1956, President Eisenhower painted a vision of an interstate highway system to connect people across the American continent. That system is now complete. While it has provided many benefits to America, it has also created problems. Our singular focus on facilitating the rapid movement of motor vehicles has caused us to create a transportation monoculture. In too many places, we have created communities in which driving is the only safe and convenient option for traveling from Point A to Point B. Tonight I call upon Congress to join me in an effort to transform America’s transportation infrastructure from the ground up by 2020. Central to this new transportation future will be communities across America that enjoy seamless networks of trails, sidewalks, and on-ride bike facilities — connected to mass transit — that give people the choice of mobility without an automobile. It is time to create jobs across America building out the neglected half of our transportation infrastructure by making walking, biking and public transportation choices available to all Americans. In addition to creating jobs, this will produce multiple benefits for America. By driving less we will reduce pressures on family budgets and keep dollars in America. By reducing traffic, we will improve the daily commutes for those who choose to drive. And by replacing the fossil fuels in our cars with the energy in our bodies, we will burn calories, not carbon, simultaneously addressing the threat of climate disruption and the obesity epidemic. We can do this. By working together, we can create healthier places, healthier people and a healthier planet.

Thank you and God bless the United States of America,

Thanks for the reminder.I’ll be watching and tweeting anything even remotely relevant under the hashtag #obama #stateofthebikes it’s live on YouTube http://www.youtube.com/whitehouse?feature=inp-gh-SOU

What he says and what he does are 2 different things

If it were up to me, I would have Obama start his address by telling everyone present that they don’t need to stand up or applause every 15 seconds. The country needs to adopt a mindset of being less wasteful, and a five minute speech shouldn’t take up an hour of everyone’s time.

I’m glad Obama reiterated over the need for individual responsibility. A lot of people seem to think the constitution gives us everything we need to be an otherwise self-governed people. Problem is that the constitution was written in a time when a person who couldn’t deal with most problems on their own didn’t last long enough to become a burden to their community.

What you said, though with acknowledgment that the cult of ‘individual responsibility’ in this country, is too often code for stripping the ability of persons to protect themselves from exploitation by employers, healthcare companies, producers of dangerous or toxic products, predatory financial service providers and environmental destruction. When the constitution was written most of these things were not a problem.

Strength in numbers is why wolves separate individuals from the herd before making a meal of them.

I thought it was a good speech. I like Obama and I think he has very good intentions, but there was a lot of “pie in the sky” stuff – most obviously the notion that Congress will work together. Good luck with that one.

Loved the tweet you forwarded last night: “bingo RT @SplendidCycles: Pro-auto industry in one segment, clean energy in another: somehow I don’t think he gets it #sotu”

I think he gets it but wont say it. Thats why i have become cynical of everything else he says. Eg reducing the influence of wall st when, in fact, former Goldman Sachs execs acount for so many cabinet and director positions not to mention monsanto directing the FDA.

But, even IF his words are not sincere, we can use them as leverage and we should.