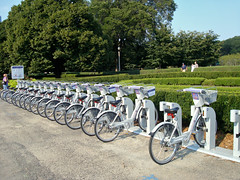 Bike share programs are the “gateway drug”
to bicycling, according to one news editor.
(Photo: Will Vanlue)

Here’s the news that caught our eyes this past week…

– Another one bites the dust… After doing a little reasearch, city officials in Ottawa recently determined the cost of implementing bicycling licensing will outweigh the benefits of such a program. They concluded that implementing the program would present “limited benefits and significant challenges” while also introducing “a significant barrier to cycling.

– Commuting on a bicycle will continue to be an economic gain over driving if the price of gas stays high or continues to rise. CNN’s Fareed Zakaria explains why politics, not direct supply-and-demand, is likely to keep the price of oil high for some time to come.


– Bill Walsh, copy editor at The Washington Post, used to question the necessity of cycle tracks and other bicycle infrastructure around Washington DC. However, after buying a Capital Bikeshare membership he is riding to work 94% of the time and says the improvements for bicycles “make perfect sense.”

– Congress failed to renew a commuter tax benefit package in time and now 2.7 million people who take public transit to work will have to pay roughly $550 more in taxes each year. Now that the package has expired, the tax benefit for driving and parking your car at work is $240 while the monthly benefit for riding transit is only $125.

– Again in Washington DC, Capital Bikeshare is struggling to attract African American customers. Only about 2% of annual members (versus 50% of the District’s total population) are black. One major challenge to increasing the number of African American members is the lack of safe bicycle infrastructure connecting heavily African American neighborhoods to the city’s core.

– Actor Gene Hackman was struck by the driver of a truck late last week. Hackman was riding a bicycle in the Florida Keys when a pickup collided with him from behind, throwing him onto the shoulder of the road.

– Victoria, BC is now home to a tricycle delivery service, similar to Portland’s B-Line. Andrew Mitchell, founder of GeaZone Exo-Courier, says his company is thriving. Currently GeaZone has two pedal-powered vehicles on the road and 10 more are on order.

– Vancouver, BC is dealing with the complexities of designing a bike share system in a city under mandatory helmet restrictions. Sanitizing machines and disposable helmet liners have been proposed as ways to manage communal rental helmet hygiene. Portland’s Alta Bike Share will likely be weighing in with its own proposal to address the distribution of rental helmets in the near future.

– Portland may be getting more competition in the race to be America’s top bicycle city. Long Beach, CA is gaining attention for installing bike boulevards, protected bike lanes, and 130 miles of paths — all in the name of economic development.

– Patrick Symmes had his bike stolen in broad daylight in New York City. The incident became an obsession, driving him to understand the culture of bike thieves and share his findings in a feature story in Outside Magazine. His story even brought him to Portland where he conducted a GPS-enabled sting in front of the Central Library.

– One woman is relying on a specially constructed bicycle in her 500 mile journey across Antarctica. Fat, tubeless tires and other specialty components will help her traverse snowdrifts, rutted ice, and other hazards at the bottom of the globe.

– After reporters questioned Ron Paul’s health, the 76-year-old congressman from Texas suggested going for a bike ride to prove he’s in shape.

– In the debate surrounding parking fees it’s important to remember how much it costs to install and maintain each and every car parking space.

– Giant Bicycles has launched a campaign for “real riders” in Australia. Take a look at the video below to see exactly what they’re doing:

Did you find something interesting that should be in next week’s Monday Roundup? Drop us a line.

Has some one set up a collection of cities that have tried licensing bicyclists?

The failure rate of 100% is anecdotal as far as I know.
For the sake of participatory democracy we should be able to present a compilation, perhaps in wikipedia format, that describes the reasons that it has consistently failed or why the few that didn’t fail survived.

Then every time some crank proposes bicycle licensing as the cure all to road funding blues and criminal cyclist behavior we can just point to that and ask politely that they see their doctor for treatment of Osteoneurosis.

This is sad; I’m not finding a lot compiled yet.

To me an official government or insurance group study and documentation is what is need to show politicians that this issue has already had money wasted on it and we should not waste more money.

Love the Giant video. Anything that helps get more everyday riders out is a win for everyone.

Don’t bother reading “Pinched my Ride”. No insights, 12 page waste of time. Can’t believe dude spent so much effort on that, for so little results.

re; the Globe and Mail bikeshare/helmet story: I honestly don’t see how required helmet use for bike share users will ever be successful. One person in the comments over there suggests:

“…The only solution to the helmet law problem is to repeal the law or grant an exemption for bike share users. …” ‘Slow Rider’/globe and mail comments

With that idea, if you’re riding a bike share bike, you don’t have to wear a bike helmet. That’s an interesting idea. For some people, maybe even a little motivation to ride a bike share bike rather than a personal bike. Try it out, see how it works out.

Oregon’s bike helmet use law requiring only people 16 and under to wear bike helmets while riding, should have the challenge for Portland’s bike share operator, Alta to deal with the requirement, be less difficult. Is there a minimum age for riding the bike share bikes? Because examples I’ve seen look like they’d be kind of big for some grade school kids. If true, that would cut out some of the helmet required potential users.

Should Oregon just dump the entire 16 and under helmet law across the state to make the bike share program’s challenge more manageable? Obviously, some people are going to say ‘YES!’, but I’m not sure that would be a good idea.

Opus the Poet
Reply to  wsbob

The requirement to have a credit card before being able to access bike share pretty much excludes the under-18 crowd.

Bike shares I’ve used allow two bikes to be checked out on one card.

wsbob
Reply to  Opus the Poet

Opus…I was thinking of a family possibly renting a bunch of bikes…Dad paying. With Oregon law, the kids would have to be wearing helmets.

I just wonder if there’s any possible way Oregonians could wrap their minds around the idea of having the duality of a mandatory bike helmet use law for 16 and under that included a waiver if a bike share bike is used.

Seems like a major contradiction. As someone over in the Globe and Mail comments noted though, the design and intended function of bike share bikes is for, slow, upright riding position riding. That being made a condition of a waiver could possibly help it be a more realistic proposal.

You usually can’t rent multiple bikes on one card, maybe 2 at a time only.
Considering the liability costs in the country for anything involving kids, I would expect the operator to limit use to adults, or perhaps people over the age of 16. They generally don’t have kid seats, so little ones are not expected to use them either.
Generally, tourist families are better off renting a bike and trailer or a bunch of bikes from a rental place, by the day or hour, instead of having to return a bunch of bikes every 30 minutes to avoid fees.

“…I would expect the operator to limit use to adults, or perhaps people over the age of 16. …” Joseph E

Good points joseph. Limiting the use of its bike share bikes to people 17 and older, would be an easy way for Alta to get out from under having to deal with Oregon’s 16 and under helmet law.

Although it was frustrating in some ways, I found the saga of the stolen bicycles quite humorous.

Perhaps if I had more money to burn, I would get a cheap cell phone with camera, somehow conceal it to the bike (I dont’ know how), and then somehow program it (build an app) so that it would turn on the camera and microphone and start transmitting to either wifi or the cellular network if the bike started movine, and then lock it to a rack somewhere. . . .

I always thought it would be cool to get one of those exploding dye packs but instead of dye use synthetic skunk spray.

(1) I’m sorry Patrick (author of the Outside Magazine article), the Steel Bridge is not “ugly”.

(2) Alright Giant, finally someone from the industry talking sense. I hope this marks a trend toward more and more real and practical bikes for regular commuter folks. Bikes with clearance for fenders and big tires, comfortable geometry and less or even no carbon. Modeling bicycles after racers and the race industry needs to come to an end. I like to watching racing and think it’s a great sport, but it’s a very small percentage of riders who race, and should not drive the way bicycles are made.