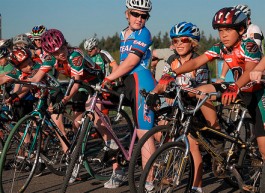 The future is bright for junior racers in Oregon;
but your support could make it brighter.
(Photo © J. Maus)

With the popularity of cyclocross stoking the fire and the Oregon Bicycle Racing Association (OBRA) tending the flames, Oregon’s racing scene has flourished in the last few years. A key to that success is the involvement of young “junior” racers aged between 10-18 years old. Tonight in Portland, Bike N’ Hike will host a benefit event to support junior racing. The guest of honor will be Jacob Rathe, a former junior who has signed a major pro contract for the 2012 season and who serves as testimony to Oregon’s success.

We first noticed Rathe when he represented the Team USA at the UCI Junior World Championships back in 2008. Since then he has continued to excel and he took a big career step when he signed with the Garmin-Cervelo professional team back in April. 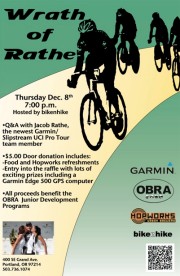 John Wilson, who directs the Oregon Junior and High School Cyclocross Race Series, says that’s because Washington let young racers have their own time slot at local races — instead of throwing them in with adults.

In 2009, Wilson launched a seven race junior cyclocross series. The goal, says Wilson, was to use cyclocross to
grow junior participation in all cycling disciplines, and, “hopefully start the process of generating world class cyclocross talent from the Pacific Northwest.”

To further nudge junior racing along, OBRA gave juniors free cyclocross licenses, and gave promoters a break on rider processing fees and officiating fees. In return, promoters agreed to cap race registration fees to just $5 for juniors (that’s compared to fees up to $30 for adult racers).

In 2008 there were no 10 and 11 year olds racing cyclocross in Oregon and the average number of juniors at per cyclocross race in Oregon was 17 (and just 10 at non-‘cross events).

Now, after three years of Wilson’s series, there are an average of 75 junior racers at cyclocross events and 35 juniors per race at non cyclocross events. And the pipeline remains strong. OBRA stats how that the 10-12 age category grew 55% from 2010 to 2011.

OBRA Director Kenji Sugahara, who is also a board member with the Bicycle Transportation Alliance, doesn’t need any convincing that junior racing is worth the investment — even for results beyond the race track. “If we get good exposure in the high schools it really helps legitimize biking not only as a sport but for cycling as transportation. It makes cycling more mainstream.”

For Wilson, the formula works. He feels that cyclocross is the perfect “entry point” into the sport for young kids. He credits a very supportive race community (the cheering for juniors is very loud at races), the access to training facilities (any local park will do), and the simple fact that riding bikes in the dirt, on gravel, and over grass is a lot of fun.

Once kids see their skills improve it only increases their motivation to get better. “Then you have a kid hooked on cycling,” says Wilson, “who perhaps branches out to Road/MTB/Track.”

Exactly. And I have a feeling we’ll be seeing a lot more riders like Jacob Rathe go from local races to the world stage.

Stop by Bike N’ Hike (400 SE Grand Ave) at 7:00 pm tonight for the “Wrath of Rathe” benefit featuring a Q & A with Rathe and benefitting OBRA’s Junior Development Program. A $5 door donation gets you food, beer and other drinks, and entry into a big prize raffle. More event info here.

Subscribe
« Citywide ‘swarm’ ride planned to support port blockade
In my opinion: On livability and the CRC, USDOT Sec LaHood can’t have it both ways »