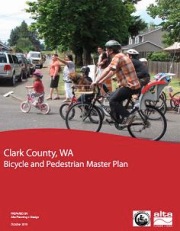 Cover of the plan.

While Vancouver isn’t the same cycling utopia as Portland; bit by bit, the area is striving to embrace two-wheeled transportation. Those efforts just got a head nod from the Active Living Research (ALR), an organization that promotes walking and biking as means to fight childhood obesity.

In a press release, Clark County Public Health announced it received ALR’s 2012 Translating Research to Policy Award for its Health Impact Assessment (PDF) of the Clark County Bicycle and Pedestrian Plan. The annual award, given to one organization each year, recognizes exceptional use of research in making policies affecting youth physical activity levels, according to ALR Research Coordinator Chad Spoon.

Saying it was “an honor to receive the award,” Public Health Officer Alan Melnick believes the award places the county in “good company” with past recipients that had “impressive” projects. Past award recipients include New York City’s Active Design Guidelines, and a Texas effort to address childhood obesity.

Efforts to address childhood obesity locally are needed, according to Melnick. “Twenty-three percent of Clark County tenth-graders are overweight or obese,” he said, referencing a 2008 study. 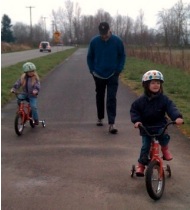 Clark County Planner Laurie Lebowski, who serves as the county’s bike and pedestrian coordinator, hailed Public Health’s assessment as an example of government synergy. “It’s a great example of how different agencies can collaborate and do great work,” she said. The review was far from a token gesture of approval, according to Lebowski.

“Public Health’s assessment of the bike plan’s polices were given to the Board of Commissioner at critical points during the decision making process in a very innovative way to show the impact each policy would have on the health of Clark County,” she said.

Lebowski believes the county’s bike and pedestrian plan is on the right track for making the county a healthier and bike-friendlier place to live. “The plan will increase community health, decrease medical costs for the county and help Clark County have a more complete transportation system,” she said.

The award comes with a $1,000 cash prize, a recognition plaque and the invitation to make a presentation at the annual Active Living Conference.

While it may be years before Vancouver starts to discuss its first cycle track, it’s nice to see our neighbors get some hard earned — and much needed — recognition for the progress the area has made the last few years.

— Marcus Griffith (marcus.griffith(at)gmail.com) is our Vancouver correspondent, read more of his coverage here.

Bikes don’t solve all our problems, but they are pretty good for a lot of them. What is not to like about bikes?

Wonky victories are not as fun as a choatic protest, but they will turn the tide towards alternative transportation.

Glad to see more coverage on what’s happening north of the river.

A couple notes on the article:
– ALR stands for Active Living Research, not Active Living Resources Center
– I noticed two broken links (the Translating Research to Policy Award link has a double html at the front and the Clark County Bicycle and Pedestrian Plan link directs to both BP and Clark county, causing an error).

Thanks again for all your work!

Glad you appreciate the north of the river coverage. I’ve fixed those mistakes. Thanks for pointing them out — Jonathan

Thanks for catching the typos… I think I owe Jonathan a beer for sending them to him. There are three things editors hate: deadlines, typos and…. I don’t remember the third thing.

Seconded on the thanks for Vancouver/Clark County stories, to both Marcus and Jonathon. And cheers to Laurie Lebowski, too; she deserves recognition for all she does for bikes and peds, and her untiring good attitude.

(BTW, Jonathon, I’m still rooting for a “North of the River” forum addition.)

I appreciate your gratitude towards Lauire–she, and a few others, are unsung heroes of Clark County bike and ped. success.

As for a Clark County specific forum, the idea has been considered on-and-off for awhile. As the area continues to embrace alternative transportation, there is an increasing need, and desire, for more bike coverage. But, its tough to say if there is enough bike stuff now to justify an entire forum or stand-alone website. There’s clearly more now than before, but is it enough? It’s a great question that has resulted in interesting feedback in the past.

As a transportation planning professional based in Washington DC, I have been recommending the Clark County HIA to colleagues for over a year. It is truly an exceptional achievement. Congratulations!

Good job to everyone who worked on the plan! Big thanks to Lauire Lebowsky, Jennifer Campos, the Bike and Pedestrian Advisory committee, all the Vancouver Bike Club members that gave tons of helpful input and the Public Health Department for doing the technical work to support the plan.