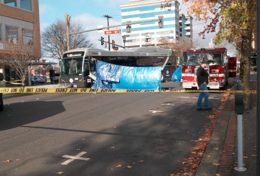 An “elderly woman” was struck and killed by a C-TRAN bus today while walking across the street in downtown Vancouver. The collision occurred a few blocks from the bike route across the I-5 Bridge, according to witnesses.

The Route 4 bus was in the process of turning left from 8th Street to Washington Street when it collided with a unidentified woman in the marked cross walk, according to passengers on the bus. “Everyone on the bus was yelling at [the driver] to stop… and than the bus hit her and we started yelling [at the driver] ‘you just hit someone’ and everyone got off the bus,” said Taryn Park, who was on the bus at the time of the collision.

Neither the Vancouver Police Department nor C-TRAN officials confirmed details of the incident.

The intersection is traffic controlled and witness statements did not clarify if the bus operator, or the woman walking, were crossing against a traffic control device.

“I don’t know what the signal was [for the bus], but it was turning and it seemed legal, but the driver should have seen her, everyone else did,” said Taryn Park. More details will likely be made public later in the day.

The A posts on these buses (and on the mail trucks I drove in Oklahoma) are in a location that really hides crosswalks well. I was trained (and I believe TriMet drivers are also trained) to lean left and right in their seat to see around the post before initiating a left to check for pedestrians.

Sorry to hear about this. My wishes go to both sets of families.

If there was a green signal for the 8th Street traffic, then the pedestrian most likely had a WALK signal and the right of way.

My assumption…given the limited public information…most likely the pedestrian had the right of way…I doubt the old lady was ‘darting out’ from the curb given the location of the stopped bus and the geometry of the intersection and the bus’s path to the west side sidewalk stop ahead. The pedestrian likely was in the crosswalk walking west for 6 or more seconds …but this can depend on which direction they were walking and where on the bus the bus driver struck her.

That intersection’s sight vision triangle is pretty good. This assumes the bus was the first vehicle waiting to turn at the light. We will see if it got delayed waiting to turn left (southward) by oncoming traffic. The pedestrian could then have reached a blind spot for the driver or come down to driver distraction from something going on the bus. The cameras should help sort out all of these points.

Not sure how much that would change driver’s liability, but it is possible for the woman to have entered the crosswalk with a ‘don’t walk’ while the driver had a green light.

At the intersection in question, the pedestrian traffic control device turns into a “walk” the same time the traffic light turns green. However, the timing is such that there is a 15 second delay between the walk sign turning into a “don’t walk” before the green light turns yellow.

The timing of the pedestrian and vehicle traffic control devices are such that there is a 15 second delay between the pedestrian walk sign turning into a “don’t walk” before the green light turns yellow.

The C-TRAN videos should have captured the incident.

This sounds a lot like the “Sandi Day Trimet left turn” crash.
Except in this case passengers witnessed that the pedestrian was in the crosswalk and that the driver was not stopping.

WITNESSED
MULTIPLE PEOPLE WITNESSED
From INSIDE the bus.

Are there situations where a pedestrian does not have right of way while in a marked crosswalk?

Well, hypothetically, when crossing against a signal, except one could argue even then a driver is not legally allowed to simply hit someone without taking reasonable care to stop.

And, as a hypothetical prosecuting attorney, I would counter argue that despite the victim’s mistake in use of the crosswalk that a “reasonable person” driving would have seen the elderly woman walking in the crosswalk.

In this case “reasonable person” also includes the passengers whose task at hand was not driving.

Thus the driver is negligent no matter the legality of the crossing pedestrian.

It’s been a hard week for peds in the Metro area… two hit in Beaverton (one fatally), and now this. 🙁

Be safe out there people.

If she was a cyclists, people would ask “was she wearing a helmet”

Did she fail to wear bright colors? Was she walking more quickly than 2.7 mph? Was the sun/rain/fog/wind-blown leaves reducing visibility? Poor driver. [SARCASM]

Especially since Vancouver has an all-ages mandatory helmet law.

any word on what looked like a bad bike crash at SE 25th and Hawthorne yesterday afternoon?

I bike past there on my way home. I thought the TV show Leverage was filming in Vancouver again because there were so many trucks and people standing around. Does anyone know the identity of who got hit?

The TV reports of witnesses state the bus was moving at speed before the turn… The bus was most likely in the pedestrian’s blind spot. The final crash report will evaluate to see if it was driver error, poor mirror design (blind spot), sun glare, and other compounding issues, etc.

A public record request for the video has been submitted to C-TRAN.

Locally owned, independently operated, it serves its community well. This item bannered today’s deadtree and was on The Columbian website 22 minutes after the collision.

This is why rural Oregon hates city-dwellers. Show some respect!

Thank you for not calling the collision an “accident” and thank you for referring to both the pedestrian and the motor vehicle as (albeit indirectly) as “traffic”.

The woman killed is in my family, she was my Great Aunt, please keep our family in your thoughts and prayers RIP

I only know that I had several unplesant encounters with Ctran drivers around OHSU-campus. They don’t pay a lot of attention to bicyclists, cut me off when turning right etc. Maybe ctran should rethink their drivers training.

*&@#^ C-tran drivers. I have a great deal of respect for most bus drivers, and let’s be honest, most Trimet drivers out there are great at what they do. But I have rarely had good experiences when I see a C-tran bus on the road near me, even when I’m in a car.

The worst is on I-405 to I-5 north, where they blast up lanes that are merging, then cut into traffic without looking, then stop in the middle of the interstate so another C-tran bus can get in. I’ve just come to assume that when I see a C-tran bus on my right side, that he’s going to try to cut me off.

I have had several near collisions with C-Tran buses in downtown Portland, but I have to say that after submitting complaints via directions on their website detailing what happended and what the bus number was, things seem to have improved. It has been at least 6 months since a C-Tran bus has cut me off on SW 6th. I strongly recommend that people take any and all complaints about bus driver behavior to C-Tran/Tri-met. I’m very sorry to hear about this tragedy.

Unknown, you are in my thoughts as is the rest of your family.

Jonathan: So now you’re reporting bus crashes even when bikes aren’t involved? I think you spend way too much time covering crashes as it is.

People walking and biking are BOTH vulnerable road users that use crosswalks and sidewalks. Covering a bus killing someone in a crosswalk, when it could have easily been a cyclists makes sense.

As a cyclist that lives in downtown Vancouver, I can tell you that lots of cyclists go through that intersection every day and I think covering the story is relevant to everyone’s safety. I think its also important to find out why the accident happened we prevent a repeat.

What’s taking so long to get the video up?