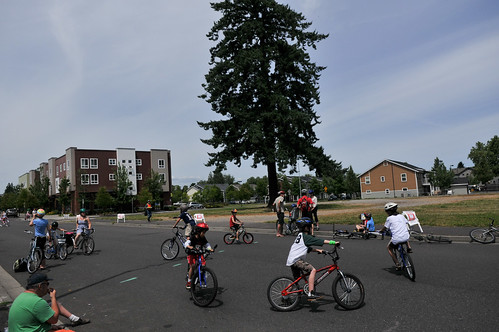 Thanks to the Community Cycling Center, this vacant lot in the New Columbia mixed-income housing neighborhood will soon be home to a bike skills park, pump track and repair center!
(Photo © J. Maus)

The Community Cycling Center has won a $10,000 grant to build a bike skills park and community bike hub in the New Columbia neighborhood of North Portland.

“As early as next summer,” reads a CCC press release, “residents at New Columbia will have a new facility in their neighborhood where they can hone their bike handling skills and access tools to keep their bikes in good repair.”

“There are so many bikes at New Columbia in need of basic repair, but we haven’t had the skills or tools… we are excited to train community members how to fix bikes and have a place to store tools.”
— Egbevado Ananouko, resident of New Columbia

According to the CCC, the new facility will promote bicycling skills and active play for kids and teens. It will include a skills course, pump track and a bike repair center. They also plan to work with “We All Can Ride,” a volunteer group of local residents who will help the CCC plan, maintain and manage the project.

In addition to the $10,000 from Bikes Belong, CCC has garnered financial support from Home Forward, ODS, and Bike Gallery. The CCC is also working with the Northwest Trail Alliance, a local non-profit with experience and expertise in building skills parks and pump tracks.

Far from an isolated effort, this new bike facility is a natural extension of work the CCC has done at New Columbia to broaden access to bicycling in areas of Portland that aren’t usually thought of as cycling hotbeds. The CCC has manged an earn-a-bike program at New Columbia since 2009. That effort has spurred interest and inspiration from residents like Egbevado Ananouko, who started the We All Can Ride group.

“There are so many bikes at New Columbia in need of basic repair, but we haven’t had the skills or tools. With support from the Community Cycling Center, we are excited to train community members how to fix bikes and have a place to store tools,” says Ananouko.

This will be a wonderful and most needed project!! Our neighborhoods in this part of P-town are teeming with young people and their bikes. I am so glad to see vision and action arrive to provide needed amenities that will inspire!! North Portland has a lot of bike friendly space for children in my opinion. I can not wait to help build that pump track !

there is no neighborhood I have been to in the world where I have seen as many kids on bikes as in New Columbia. I taught bike safety their last year and right after the CCC did their bike drive you could not look down any street without seeing groups of two to four kids riding their bikes on the sidewalks. It is a model traffic calmed community. But once you know how to ride a bike where is there to go from New Columbia?

Is that a serious question? North Portland is FILLED with low traffic level side streets, tons of parks,and access to the Willamette and St. Johns. I ride with my child all over the area! Hopefully somethin’ will coalesce from these plans, and someone will step up to the plate to get kids exploring NoPo! It is their neighborhood, they should be exploring it!! To that, I point out that some of these children are not coming from a background that embraces cycling with the same passion as those who are embroiled in the lifestyle. But a great opportunity such as this can , IMO work wonders. And Kiel, I give you massive props for what you are doing with the Bike Train projects, ( not by what I have read here per say, but through the compliments of friends I respect) but I have tried to get you to contact me no less than THREE times to pick your brain about starting a Bike Train at Cesar Chavez School. What’s up with that? See ya tomorrow night at your presentation!

Getting out my compass, protractor, and graph paper.

This is great news……
Just great.

YAY!!!! glad to hear about this coming to our part of North Portland!