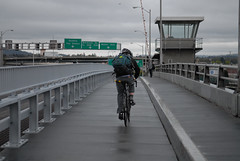 Multnomah County confirmed today that the biking and walking path on the Morrison Bridge will re-open permanently on December 5th. The path has been closed since early June while contractors work to replace the bridge’s steel grating due to safety concerns.

The project was supposed to be completed by mid-September but has been delayed due what The Oregonian refers to as a “messy environmental and bureaucratic fight.”

The Oregonian reported this morning that the holiday shopping season has provided the County with impetus to temporarily open two standard vehicle lanes in each direction. However, “in early January, the old detours and path closures will return, and motorized traffic will be reduced to two lanes once again,” says The O.

After reading that story, I contacted County spokesperson Mike Pullen. He said the biking and walking path will open on December 5th, and unlike the rest of the bridge roadway, “it will not close again.”

This is very good news for thousands of people who rely on the Morrison Bridge as a key connection from the Central Eastside to downtown (and vice versa). Bike advocates spent 12 years pushing for better bike access on the bridge and it has been painful to have it taken away after such a long wait!
—
For more on this project, see our Morrison Bridge story tag and read coverage in The Oregonian.

This will smooth and speed up deliveries for my cargo bike. Thanks for the update. I really enjoy this route.

Does anyone know if there is a plan to extend the bike path over the viaduct to Morrison in the future?

You would have three difficult onramp/offramp conflict points, and only three traffic lanes to work with once you get to Grand. The two blog detour to Taylor seems like a safer route.

No plans to extend the bike path to SE Grand Ave., if that is what you are asking. County and City studied that, but the freeway offramps and merges prevent a safe route to SE Grand.

Hi, Jonathan. Pullen gave me some bad information, telling me yesterday that the bike path will close again next year. He emailed to correct the information today. The story on the O’s website has been updated. The error about the reopening of the path was only there for a couple minutes. Thanks.

This whole project is a huge joke. Millions of dollars wasted to make the bridge safer for careless/reckless drivers that speed on the grates in the rain. How can people criticize the paltry amounts spent on bike infrastructure without doing the same with projects like this?

Chris I – is that a rhetorical question?
you saw this piece in the Monday Roundup yesterday?
http://scintillator.wordpress.com/2011/11/08/the-driver-privilege-checklist/

(I agree with you, of course, but it is good to be reminded that most folks still think of cars as ‘the grown up way to get around-ha!)

It was a bummer to see it close as I’d been using and loving it… Can’t wait to start using it again.

All I can say is “yay!” As much of I love the Hawthorne Bridge, I also hate it.

I’m happy to hear the excess traffic in the B-C couplet will be diverted, at least for a while. This project has been a travesty.

I think it’s good that the county spent the money on this project when it doesn’t really contribute to the rest of their jurisdiction (“outside Portland city limits except bridges” on a basic description).

It shows that they’re willing to support what’s in highest need where they can, even if it doesn’t directly benefit their greater areas.

However, it may be beneficial for them to now turn towards improvements outside of Portland, now that this project, Sauvie and Sellwood are complete or underway.

With all the millions being poured into the project, does anyone have any idea whether they will spend a few more bucks to paint a bright green cross walk where the bike and walking path crosses the onramp easbound onto the bridge from downtown (i.e. similar to the east end of the Hawthorne bridge)? The way it was, almost no cars would stop for crossing bike traffic. What can be done to make sure this small addition is included to the project?

Tried to cross it eastbound this morning and it looks like it’s closed again!

Whoops! Not December yet! My bad.

Morrison bridge path is now open! Rode over it this am and all clear.