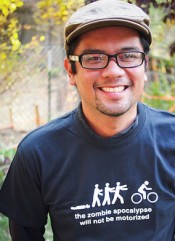 Bike tourer, photographer, foodie, train lover, journalist, artist, and advocate Russ Roca has recently launched a line of t-shirts. Like his varied interests, the shirts have many themes. They also have a mission — to help fund he and his partner Laura Crawford’s upcoming bike adventure and their ongoing Path Less Pedaled project

I first came to know Russ through his bike activism in my home town of Long Beach, California. Since those days, Russ and Laura have logged thousands of miles by bike and train criss-crossing America in search of interesting people, places and projects that they’ve then shared with their growing legion of fans through their website and Facebook page.

They’re now plotting a trip to New Zealand and Russ hopes the sales of his t-shirts help get them there.

We recently asked Russ a few questions about his shirt designs, the Big Trip, and more…


“Every time I see a zombie movie, I just want to tell them to get a bike.”

BikePortland: When did you start being a t-shirt designer? How did this all come about?

Russ Roca: I use to work as a graphic designer, before the photography and before the cycling. For fun, I use to silkscreen my own shirts in the bathroom of our apartment. I used my darkroom equipment at the time to burn my own screens and the shower head to clean out screens. It was a big mess! Now, I’m using an online service that allows me to design shirts and they handle the printing and distribution. 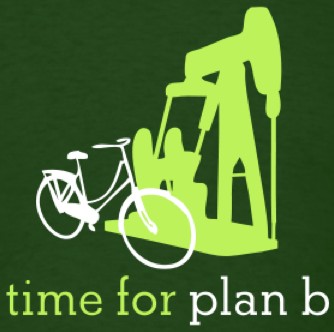 Rumor has it you’re planning another big adventure. Do the t-shirts help fund it?

Yes and yes. We’re planning to go to New Zealand for three months and are hoping to leave after Thanksgiving. Our goal for that trip is to look at the bicycle travel and tourism industry in New Zealand. The country has been putting a lot of money to make it into a cycling destination and we want to see what the U.S. could learn from them.

We want to do a DIY travel type show. Sort of like No Reservations, but on a bicycle. Each episode will be about five minutes long that will focus on something food-related, something cultural and something bike related. We’ve already started doing outreach to bike advocates in NZ to get a lay of the land. 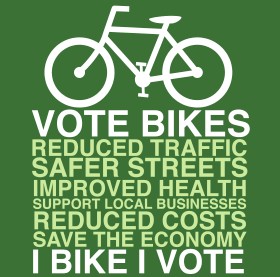 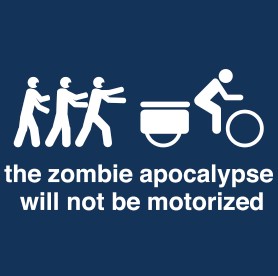 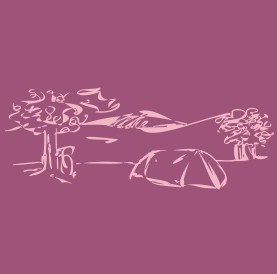 How has response been to the shirts so far?

The shirts are really key to making this happen. Within the first few days we sold over 100 shirts! The response has been amazing, especially to “The Zombie Apocalypse Will Not Be Motorized” shirts. The zombie shirts have been the most popular, probably due to a renewed interest in zombies. 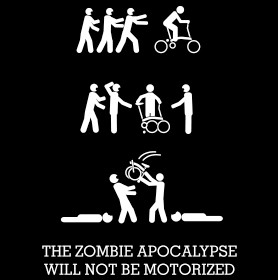 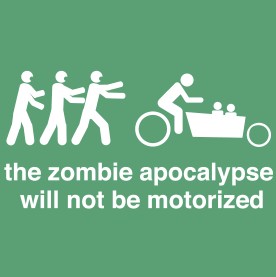 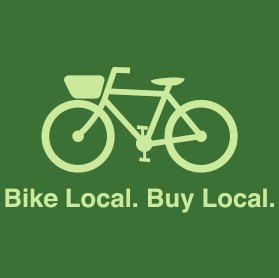 For me, the zombie apocalypse is symbolic of a lot of things. Peak oil, natural disaster, climate change. It is sort of a gallows humor. In every zombie movie, one of the big dilemmas of the survivors is finding gas for their cars! The season opener of The Walking Dead starts with the survivor’s RV breaking down and their search for parts. Every time I see a zombie movie, I just want to tell them to get a bike. So the zombie shirt is my funny response to that.

Tell us more about your other designs…

The designs run the gamut, but simply put: they are shirts for bike people. I have some that are humorous. One of the designs is a play on the Zipcar logo that replaces the “Z” with a cyclist and says “Zipfar.” I had a special Halloween shirt that said “People for Zombies” that was a twist on the People for Bikes logo. I also have some shirts that simply celebrate leisurely riding with a silhouette of a bike leaning up against a tree. I’m also making shirts about transit. I have a shirt with the street sign for the train and a hear that says “Trains are for Lovers.”

The design of the shirts is pretty interactive too, with lots of input from our readers. After the first Zombie shirt went up, people wanted one that showed an Xtracycle, bakfiets, recumbent and Brompton. So I designed them all and people have really appreciated that sort of interaction.

I’ve also been making some bike advocacy centered shirts. One says “Bike Local. Buy Local” and another is a “Vote Bikes” shirt that lists economic reasons for voting pro-bike. 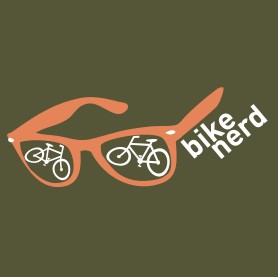 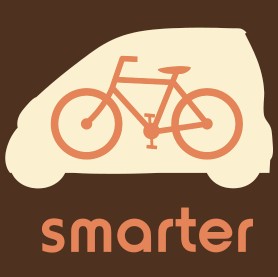 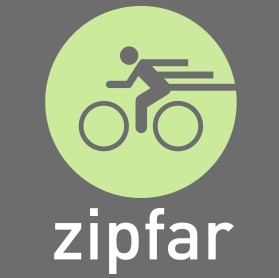 What’s next for you and Laura?

We are in a unique stage in our site PathLessPedaled.com and Facebook page. It began as a way to record our personal journey on bicycles, but it has grown into something larger. We’re turning on readers to bike advocacy news and and concepts from other bike advocates around the country.

My hope is that the shirts will continue to sell so that we’ll be able to continue to explore bike cultures around the country and eventually the world.
—

Russ and Laura are currently in Portland while they plan their next trip. You can see more of Russ’s shirts in his online store.

I love these designs! I want them all!

My only qualm is that these tees are all seemingly cotton, which I don’t like to wear while biking. It smells when you sweat, it gets cold when you get wet, and it stays wet when it gets wet.

I know it’s really expensive, but if they ever collaborate with Icebreaker or Ibex, and print these on stretch merino wool tees, I will buy the entire lot in a HEARTBEAT!!

Seems like I always like Russ & Laura’s stuff. Merino is a great material. (I wear it almost daily in the colder seasons and Mrs Dibbly loves it, too.) While I worry that merino would make these hugely expensive, it would certainly work with the New Zealand tie-in. Special editions, perhaps?

Thanks for the great comments! We’d love to do wool too, but it’s pretty cost prohibitive at the moment. We’re just venturing out, so maybe in the future we could do a collaboration with someone.

I bought the “I <3 bike touring" tee. It shows the silhouette of a bike with panniers on the front and rear. I'd love for it to spark conversations with people who don't recognize what it's depicting.

Sometimes this is a great last name. Hinting for the “smarter” design for the upcoming holidays.

I really love the fact that he did a pro-train t-shirt. Pro bike t-shirts are (relatively) easy to find, pro-rail shirts not so much.

I just wear my (longtail zombie apocalypse) tee over my wicking layer. We all stay happy and cozy that way. Thanks for the awesome shirt Russ & Laura! (and bonus – I got to thank them in person at PIR this past weekend!)

Ordering the Brompton T but help me understand the “welikebats” design – “We like things the way they are.”? Maybe I’m overthinking? (Though in my case, not likely.)

Vote Up0Vote Down  Reply
« In Vancouver, Mia Birk rallies members of local bike club
Event: Movie Premier – From the Inside Out (11/19/11) »