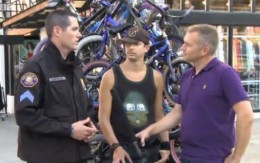 The esteemed British Broadcast Corporation has turned its lens on Zoobombing. The beloved Portland institution is the focus of a recent BBC “Close-up” segment.

The short piece offers classic footage that is hilarious (in a good way). It features a serious journalist interviewing Zoobomb’s “Handsome” Dave and Portland Police Bureau spokesman Peter Simpson in front of the Zoobomb Pyle.

There are some memorable quotes as well that will surely be repeated up on “the Hill” for weeks and months to come such as; Handsome Dave calling Zoobomb “the original open-source bike club.”

My other favorite parts…

“So this is a group of adults on children’s bikes, hurtling at high speeds down a hillside?”

“The Police Bureau has adapted to it over the years and we don’t have too many issues with Zoobombing as far as a law-enforcement response. The neighbors enjoy watching it sometimes and the participants sort of police themselves.”

I also love how a thumbnail for the segment sits adjacent to other, much more serious news from around the world. Ha! 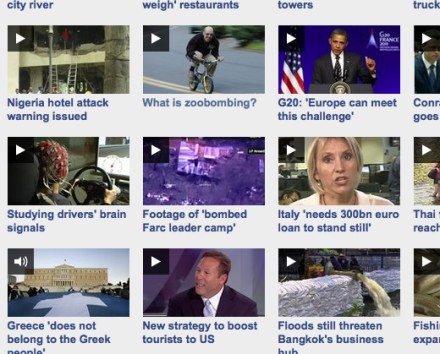 Check it out on the BBC’s website (and take note of who shot the still images!)

That looks a bit like RevPhil in the thumbnail. RevPhil ahead of Obama and the G20. Go RevPhil.

Umm. Where is this video? The link just points to a show summary of the video.

the video is on the bbc page. It took a while to load (for me). It is pretty good. And the still at the start and end is indeed Phil.

Half expected it to turn in to the BBC anthropology documentary style with undertones of Steve Irwin.

Careful–put the word “bomb” in too many comments and the whole blog will get shut down. I’m pretty sure we already have more than the required number of references to “bicycle” to raise yellow flags…

Bomb as in explosive, or Bomb as in cool ,or Bombe as in a dessert or, Bomb as in ointment.. oh wait, that is spelled Balm, not BOMB !! silly me.

Dave is so schwarmy with that ‘stache…….

I was most impressed by the Portland Police officer. It seems like lately they’ve been doing a much better job of working with groups and being a little more flexible rather than simply arresting everyone for not following the law 100%.

Other Examples: Occupy (including the Jameson square), WNBR.

Guest
round and round

Congratulations, ZooBomb.
This is another good story to make Portland proud. From hated to celebrated, ZooBomb has come a long way.
Fight Evil Crime!

Neat. I remember in the, uh, good ol’ days when the cops would get mad, they’d shut off the Max stop, and anything else they could do to thwart these evil cyclists, and the random “pile of trash” they left in front of Roccos.

I suppose that was before the streetcar and all of the glitz that now accompanies what is admittedly a pretty cool used bookseller.

Maybe try to keep your ideals on/in your own head.

Helmets are still a choice.

ZooBomb!!! This was part of the best April fools joke ever, btw.

Q- Safe? A- Yes, as safe as we can be. There is a very lovely lady that is a certified paramedic that is the very last one down every week.

Q- Responsible? A- Yes, We pack out everything that we pack in including but not limited to cigarette butts. ZooBomb is self policing so that we can make sure that one bad apple doesn’t ruin it for the rest of us. That’s the reason we’ve been able to do this every Sunday for NINE YEARS!

Q- Helmets? A- They’re strongly encouraged, but that’s between you and the pavement. Nobody can force a legal adult to wear a helmet in Oregon, only highly recommend them to wear one. Most people wear a full-face motorcycle helmet up there. Cheap dental insurance.