By now you’ve probably heard about peer-to-peer carsharing; but what about the same concept for bikes?

The State of Oregon passed a law back in June (HB 3149) that makes it easier for private citizens to rent/share their cars with others. The law goes into effect in January and companies like Getaround Inc. are already testing out the service in the low-car hotbed of Portland.

If car-sharing can work in Portland, it seems like bikes are a natural next step. At least that’s the hope of Will Dennis, the man who has just launched “Spinlister.”

According to Dennis, Spinlister is a “peer to peer bike rental marketplace” that “lets anyone who owns a bike rent it out to make cash and meet awesome people.” Below is a graphic that helps explain how it works… 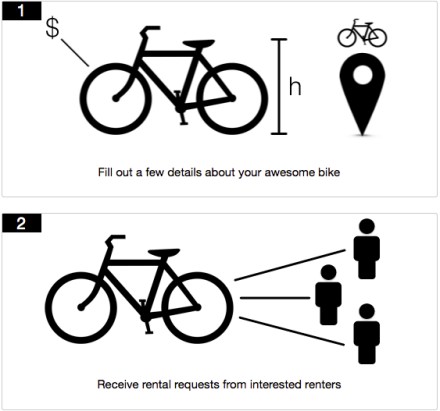 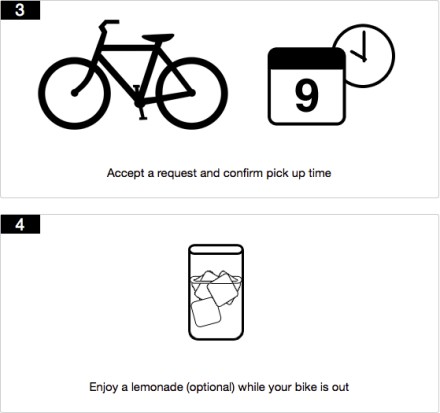 Spinlister isn’t ready for a full launch just yet because there aren’t enough bikes listed in enough zip codes to make it work. Dennis emailed BikePortland hoping to remedy that: “We’d love to become an important part of the Portland bike community. We really see it as another great way for people to form community around cycling.”

It will be interesting to see if this takes off. A big reason people don’t own cars is they’re very expensive to buy and maintain. The same isn’t true with bikes. However, maybe this service finds a niche in high-performance bikes. Personally, I’d love to do a bit of mountain biking but I don’t currently own one. Maybe with Spinlister I could rent one for a weekend adventure?

I saw their policy regarding what happens if a bike is damaged while being rented. However, that would still be a huge area of concern for me.

I could see this service working well for vacationing bikers. Beats renting some dorky cruiser for $39 a day!

It is a cool idea and I may try it. Certainly not going to rent out my good bike, but may look at some of the other ones in the stable. Too bad I had to move that apartment a year ago and had to sell so many of them on the cheap.

Seems like this would be great for cargo or christiana- style bikes too! Vacationers might find a great bike this way.

Who is to ensure that you are getting a well maintained and safe bicycle.

I love lemonade, so I just had to list one of my spare bikes. It’s fully functional and just sits there day after day anyways. I’d be a little bummed if it got ripped-off or damaged, but I’m at least willing to give it a try.

Excellent point. Something a lot of people don’t need often, but super valuable when you do need it.

On Getaround, Inc.’s site, I notice they provide the insurance to cover everything. On spinlister, I see language of good intention, and that they hold the renter’s credit card info, which could cover a damaged or stolen bike (no promise there, I notice), but what if the lister’s bike fails and causes a crash and/or injury? I’m assuming Spinlister is in this to make a profit, but it seems they may have to underwrite the risk in addition to hosting/managing a database and processing transactions.

I would want to be darn sure, and not just guess that it would come into play. Someone tripping on a loose porch step is different than someone paying you (through a for-profit third party) for a bike to ride around in Portland traffic with a crank arm that falls off (or similar). I’ll concede that car operators are required to carry liability insurance, while bikes are not, but for covering the lister and Spinlister against liability I would not be comfortable just hoping for the best. I think sharing existing bikes makes a lot more sense than buying a whole lot of new ones to rent out, I just think this start-up may have overlooked something important.

Velolet.com Similar. Launched in Jan 2011. We’re live and running. Feel free to list your bikes on our site. And, wrt liability insurance, we have that covered too.