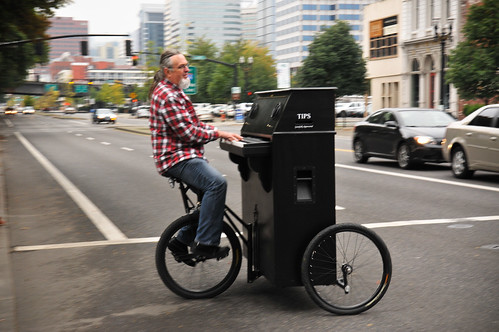 Dezy “the Pianobike kid” Walls pedals his 300-pound bike across SW Naito while singing and playing one of his tunes.
(Photos © J. Maus)

For Dezy Walls, a 63-year-old professional entertainer who plays and pedals a piano bike, Portland feels right at home.

Walls, who’s known as the “Pianobike Kid”, hails from Ireland, lived for stint in Holland and moved to Carlton, Oregon (a small town 35 miles southwest of Portland) six months ago. When he showed up at Saturday Market this past weekend on his piano bike, a few readers sent in photos and a few days later I tracked him down for a quick chat and some photos. 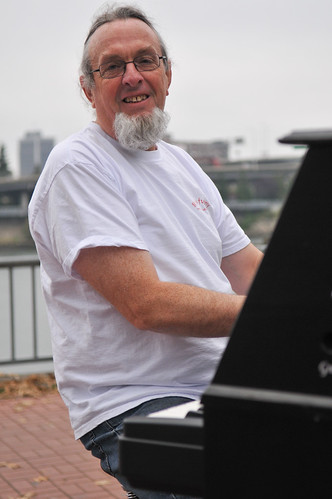 Walls is a jovial man who speaks with an Irish accent, is quick to smile, and has long silver hair that flows like the tunes he plays and the songs he sings. As he pedaled toward me in Waterfront Park this morning I asked how ended up as Pianobike kid:

“I was playing a tourist bar in Ireland and the locals would come in late, with lots to drink, and sit on the piano, blocking me from all the people I’d been playing to all night. So, I would push the piano through them and the owner would say, ‘Have you license to drive that thing?!’ and I thought, well there’s an idea.”

For full effect, and to hear Walls play, listen to the audio of that exchange:
[audio:dezy3.mp3]

That was back in 1992. It took Walls about 10 years to finally build his first piano bike, but it wasn’t nearly as refined as the one he has now. “It fell apart in the Irish rain,” he said.

His current piano bike — which he just picked up in September — is completely custom from the ground-up. It was built by Tom Zucal (a retired aeronautical engineer) and Jimmy Sindal (a woodworker); both of whom are fans of Walls’ and did the project as a labor of love. After meeting Walls and hearing his music, it’s easy to see how he’d get such devoted fans. 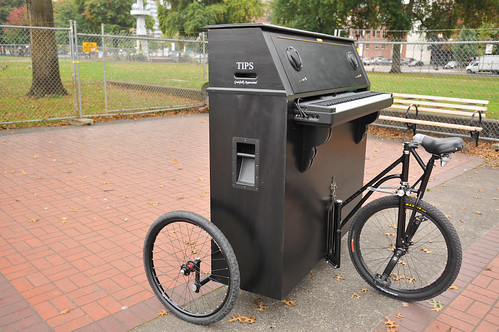 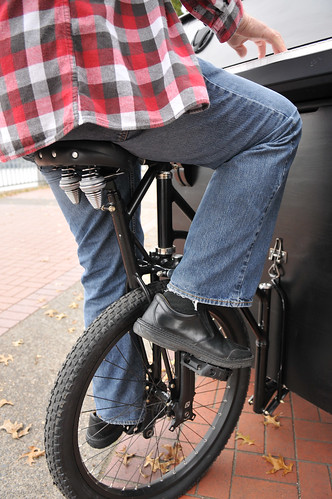 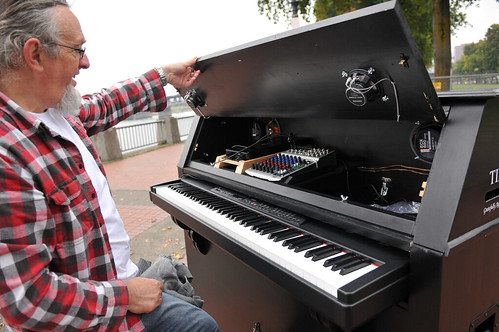 The bike weighs about 300 pounds, including a 50 pound battery that powers the keyboard, amps, and speakers. The drivetrain is fixed, which allows him to pedal forward and in reverse. Heavy-tensioned springs make the seat comfortable and the bike is steered by simply nudging the front of the piano just above the keys.

In addition to doing farmer’s markets and gigs at local coffee houses and pubs, Walls relies on corporate parties and other events to make a living. Sales of his CD also bring in some cash. Life is funny features 16 original songs — including the hit “Stress management” — all written and sung by Walls. 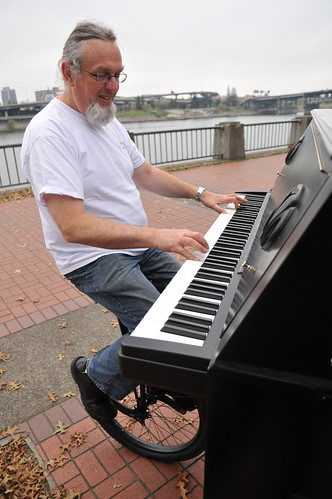 Walls’ “big ambition” he says, is to put on a musical. He’s working on a theater production (an autobiographical comedy) he hopes to open in Portland and then take on tour around the world (and yes, the piano bike features prominently in the musical). But Walls and his wife Claire aren’t planning on leaving Portland any time soon. “We wanted to find a place that really suited us and when we hit Portland we said, this is it!” 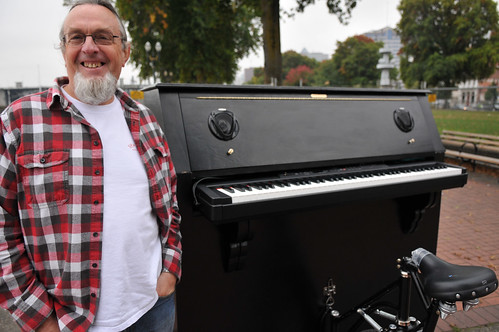 Welcome to Portland Dezy! I think you’ll find that you fit right in.

There is still a record to be broken, be the first to pedal across the country by piano bike!
Question is how do you steer that thing and where are the brakes?

I think you play “B” for brake and “G” for go.
This is the coolest thing I ever saw

I’m not sure…is it an electronic piano, or an amplified “real” piano?

…and I’ve long ago stopped trying to point out to out-of-towners what makes portland tick…..

If it’s an electronic piano does that meen he can’t ride in the bike lane?
How do you fit this into the bike corrals?

Wow, this is pretty damn cool! I bet it’ll be a hit at Sunday Parkways next year!

This is rad!! And are those really slots to put tips in on the sides? How fricken awesome:)

They will never get our name right, Its Sindle, not Sindal. lol

I would love to see him play in a pub in Portland. I hope that you put it on the weekend calendar if he ever has a show in town.

Dezy will be at Morgys Pub in Hillsboro this Sunday at 7pm. It’s right on the max at the hawthorne farms max stop. So you can bike out!

Wow. My dreams actualise themselves sometimes. Mr. Walls, one to ya!