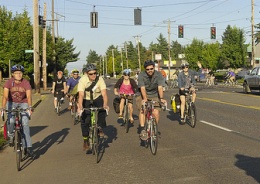 If all goes well, this will become
a more frequent sight in East Portland.
(Photo © J. Maus)

As we shared on Wednesday, the Portland Bureau of Transportation is ready to roll on a set of projects that are likely to give a major jolt to the anemic active transportation network in East Portland.

The draft East Portland in Motion implementation strategy an impressive body of work that combines PBOT’s strengths in bikeway engineering, a collaborative planning approach, and their commitment to fund projects that aren’t car-centric. It’s also noteworthy for the level of knowledge and engagement brought to the table by citizen groups like the East Portland Action Plan bike subcommittee (a.k.a. EPAPBike).

In this post, I’ll share more details on the bikeway projects in the EPIM strategy that you can expect to see on the ground starting now (depending on the weather) through 2012. (*I’ll focus only on bike projects, but it’s worth noting that this strategy also calls for a lot of new sidewalks and other improvements.)

The recommended, bike-specific projects in the EPIM draft report include:

Below is a closer look at some of the projects listed above that are set for implementation between now and 2012 (info taken directly from EPIM draft report): 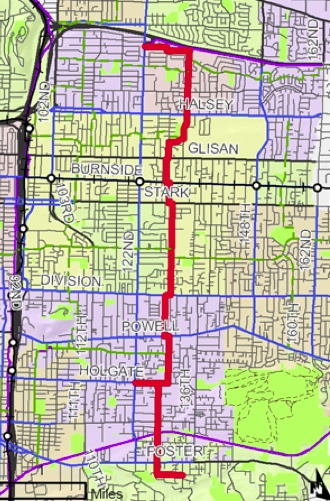 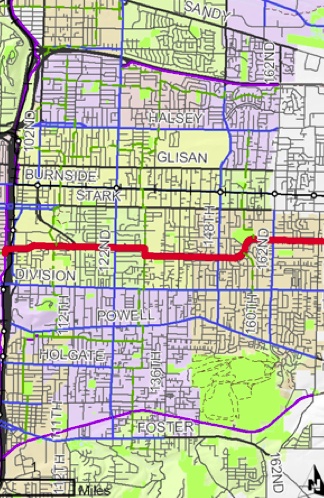 Description: East‐west greenway along SE Market Street, SE Mill Street, SE Millmain Drive and SE Main Street, from the I‐205 Multi‐Use Path to the border with Gresham. Route is classified as a neighborhood collector and a major emergency response route, necessitating different traffic calming devices than are used on local service streets.

Funding and partnerships: PBOT Affordable Transportation fund. Opportunity to partner with City of Gresham in branding and wayfinding once Gresham’s MAX Trail is complete, creating a low‐stress bikeway between downtown Portland and downtown Gresham. 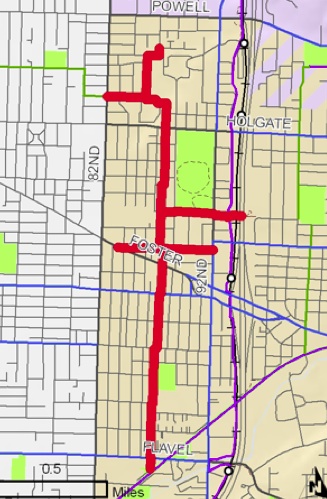 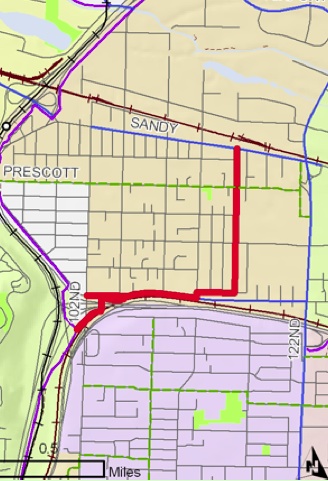 Benefits: Provides lower‐stress access to Gateway Green and the I‐205 Multi‐Use Path for residents of Parkrose and Argay. Beautifies and increases safety in area of overgrown vegetation along NE Fremont Street, and fills sidewalk gap here. Connects to Parkrose High School and Middle School, and businesses along NE Sandy Blvd. 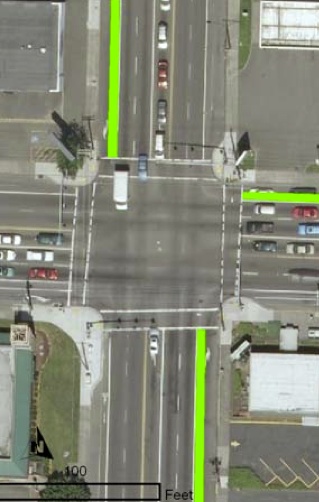 Timeline: Construction to start as soon as possible. 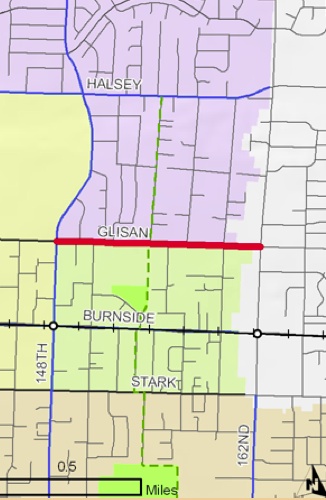 Description: Bike lanes on NE Glisan St from NE 148th Ave to city limit near NE 162nd Ave. Requires parking removal on both sides of street. Available space (approximately 7 feet on each side of the street) allows for modest buffer between travel lane and bike lane.

Funding and partnerships: PBOT Affordable Transportation fund. Project is supported by Glenfair Neighborhood Association and Reynolds School District, both of whom will be key partners during community outreach and implementation. 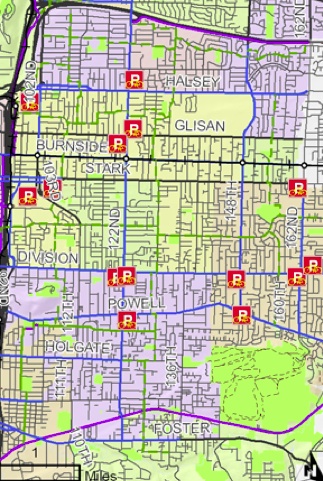 Description: Pilot project to install secure, high‐quality bicycle parking at suburban format shopping centers, small retail pods and employment centers in East Portland. Design will vary by location, but will aim to comply with city zoning code, which requires bike parking within 50 feet of the main entrance of the primary building, or distributed when multiple primary buildings are present. Safe passage between bike parking and local bikeways will also be considered. Timeframe is 2011-2013.

Quantity: Initially 8‐12 locations with 2‐8 spaces at each. 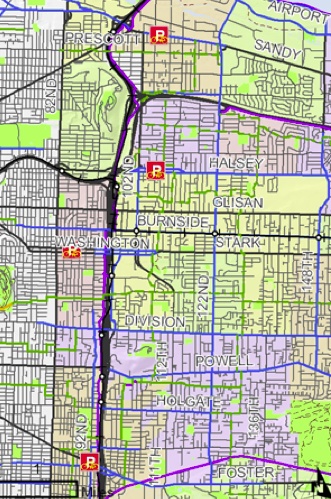 Description: Bicycle parking within the street right‐of‐way, either in the sidewalk furnishing zone or in the parking lane as “bike corrals.” This type of bike parking is most appropriate in traditional business districts where building entrances are close to the street edge. Potential locations in East Portland include:

Funding and partnerships: Funding through PBOT bicycle parking fund. Buy‐in from local business associations and business owners is key. Bike parking on NE Sandy Blvd will require partnership with ODOT, unless side streets are used.

I think this is a pretty big deal. If you do too and would like to know more about it, you can download the draft report from PBOT’s website.

I wonder if we could get the City of Maywood Park on board to complete the Parkrose Greenway one block west to the I 205 Corridor on a straight shot. I have my doubts on it being possible given that MP seems to be hostile to even having the I 205 Corridor going through their town.

I see reason for Maywood Park to change a thing. Keep it as it is.

We’re talking about navigation signage that just goes through Maywood Park, instead of treating it as a black hole by going around it to the south.

Have questions? Want to hear more?

Come to the Bicycle Brown Bag on Thursday, Oct. 20th – Ellen Vanderslice and Steve Szigethy will give a presentation on the East Portland in Motion strategy for active transportation. Noon, at City Hall. And bring your lunch! (Click my name for more details.)

80’s greenway: it’s good to see an improvement/alternative to the I-205 path…

I’m not sure it’s meant to be an improvement or alternative to the I 205 Corridor, but rather a local arterial for an underserved part of the lower eastside.

What constitutes “east Portland”, does the 50’s bikeway not count?

For the purposes of the E Ptld in Motion strategy, it’s all of the City east of 82nd Ave.

A lot of people consider the lower eastside (everything west of Veteran’s Freeway, north of the Milwaukie Expressway) broadly as ‘central’ Portland.

RE: Green paint in the right turn-lanes.
So bicycles are going to block the right-turn lanes when present? That may invite conflict, but it’s better than merging into arterial speed traffic.

It’s not uncommon for combined bike & right turn lanes, especially in Washington County. TV Highway westbound practically invented the phrase “right turn only except bicycles.” It doesn’t invite anywhere near as much conflict as expecting right turning traffic to cross the bicycle lane, which is typical at driveway locations.

Wow, it’s about time we got something out here. I commute to the airport via 122nd St. and risk my life everyday. When is the estimated completion date for all of these projects?

I think it plans for a 5 year implementation.

I’m greatly impressed by this effort and plan to attend the brown bag. I’ve also asked that the Planning and Sustainability Commission be briefed on this as an example of planning infrastructure to address equity issues. That will happen on October 25th.

Man, as an E-po resident (did I just coin a term?) I love seeing this stuff. Love it. I bike commute from Montavilla (more racks – yes!) to downtown Gresham daily, and it’s steadily improving. When the 4-M project and Gresham’s lightrail trail is done, that’s practically door-to-door for me. I didn’t see mention of the 80’s greenway NORTHERN section. I follow the sharrows, and see the paint for work on Stark/Washington. Is that fully funded? What’s the completion date?

I hope not. Based on the high rating of a recent post on Google+, calling stuff “e-po, nopo, nolo, or the couve” is generally considered annoying to long-term/native residents of Portland. I mean, if you want the bay area/new york city, you know where to find it.

Vote Up0Vote Down  Reply
« Jobs of the Week
General Motors: An apology… and an opportunity? »