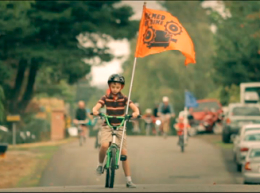 Our much beloved local film fest, Filmed by Bike, turns 10 this year. To celebrate, fest founder Ayleen Crotty is looking to make it the biggest and best one ever.

Last week she released a special, 10th anniversary trailer. Check it out…

The trailer was produced by Burk Webb of Derailleur Films. Burk is well-known in local bike circles for his cyclocross videos and previous Filmed by Bike entries (unicycling zombies anyone?). He’ll debut a Director’s Cut of the trailer at the big festival in April.

If you want to make a movie and have it be in the running for Filmed by Bike 2012, submit your entry by January 20th. More details at FilmedByBike.org.

Why is the short film that (sometimes) comes *before* the real film called a ‘trailer’?

Filmed By Bike is SOOO Portland, and one of my favorite events of the year. Great trailer!

YAY!!! Can’t wait! Great job on the trailer… or pusher… or whatever 9watts want to call it. 😛

Thanks for the plug Jonathan!

Here is what the interwebs had to say about the term “trailer”:

“The term “trailer” comes from their having originally been shown at the end of a feature film screening.[1] That practice did not last long, because patrons tended to leave the theater after the films ended, but the name has stuck.

That kids helmet does not look very secure.