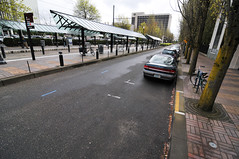 A new plan by PBOT would convert
the auto parking on this stretch
of Holladay into a 10-foot
wide shared auto/bike lane.
(Photo © J. Maus)

The Portland Bureau of Transportation (PBOT) has released a new plan for how to turn NE Holladay Street into a major, two-way bikeway from the Rose Quarter Transit Center to Holladay Park in the Lloyd District.

Advocates initially pushed to make Holladay completely carfree; but that idea was off the table by the time PBOT began an official public process for the project back in December 2010. Then, real estate developers, various Lloyd District stakeholders, and even the Portland Development Commission piled on with objections to the “loss” of any parking on NE Holladay — an element of the project that’s considered imperative to make the required space for a comfortable bikeway. 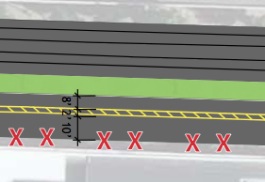 After going dormant for several months following a Stakeholder Advisory Committee meeting in May, PBOT just announced that a meeting will happen this Thursday (9/29). They have also shared a new concept plan that could get “possible action” (which I assume to mean a vote) by the SAC this week.

The breakthrough on Holladay comes with the addition of 33 auto parking spaces on NE 9th Ave.

Instead of fighting powerful interests who have drawn a line in the sand about any decrease in the amount of auto parking in the Lloyd District, PBOT’s new plan is to swap 33 existing auto parking spaces on Holladay with the addition of 33 new spaces on NE 9th Ave. The space for the new auto parking is coming primarily through diagonal parking.

“In addition to added spaces,” writes project consultant Scott Bricker in an email to stakeholders today, “diagonal parking generally has added benefits [for] people on bicycle and foot.”

On Holladay between NE 11th and 13th (the block with Holladay Park), PBOT’s latest proposal would maintain the existing nine auto parking spaces. The two-way bikeway would also end at 11th, with eastbound bike traffic continuing on Holladay and westbound traffic using NE Multnomah. Sharrows would be added to direct bike traffic from NE Multnomah to Holladay (and vice versa) along 11th and 13th.

It’s unfortunate to lose the two-way bikeway between NE 11th and 13th because this would be a key connection to the future Sullivan’s Gulch.

To make Holladay even better for bicycling, PBOT would also install bicycle traffic signals and detectors at every intersection between NE 9th and I-5.

Another breakthrough for this project is permission from TriMet to open up the section of Holladay between NE Wheeler and NE 1st for bicycle traffic only. This segment of the roadway is currently closed and is used by TriMet for emergency bus staging and other purposes. With access for bicycles, it would be possible to connect a new bikeway on Holladay directly to the major bikeway that travels north-south through the Rose Quarter Transit Center. 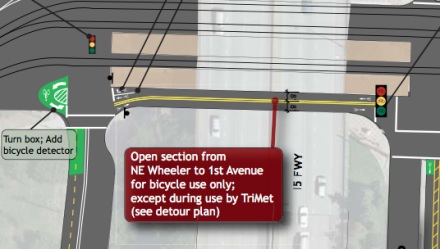 Detail of PBOT concept plan showing section of Holladay between Wheeler and NE 1st (the Rose Quarter Transit Center is in the upper left).

PBOT is also prepared to close the right-hand turn from NE 1st to Holladay to auto traffic, except during events at the Convention Center (this would be done via removable bollards, something I’d love to see used more).

Other changes PBOT wants to do along with this project include new striping on N Interstate to facilitate safer crossing from Wheeler.

The meeting where these changes (and changes to the 12th Ave overcrossing) will be discussed is this Thursday, September 29th from 8:00 am to 10:00 pm at 700 NE Multnomah (3rd Floor Conference Room). More info at the official PBOT Lloyd District Bikeway Development Projects page.

never understood the parking issue there. That area is nothing but a bunch of parking lots/garages with a few buildings scattered in between them.

you and me both… but as is often the case, this isn’t just about parking for them it’s about politics and about power and about maintaining the status quo, etc…

funniest thing about main objection by Ashforth Pacific is that they recently sold off almost all their holdings adjacent to Holladay. Seems they wanted to fight for parking so that they could get maximum amount in selling price from new buyer. More car parking = higher price for buildings.

For real. Clearly, surface parking and garages are overrunning the whole district, as visible on this map:

But slow progress is great, so long as it’s progress. I’m sure now that we’re starting to see larger infrastructure connections made, user rates will go up and businesses/developers will have no choice but to take note of the incredible benefit the improvements provide. =) This whole “bikes and pedestrians are bad for business” myth will fade from memory.

I believe the issue is not about current use, but of future use occurring through growth and development the city hopes for, and accommodating that future use through the provision of parking for people that for one reason or another, do not have the option of riding a bike to meet their needs.

Still, when I read: “…On Holladay between NE 11th and 13th (the block with Holladay Park), PBOT’s latest proposal would maintain the existing nine auto parking spaces. …”, it seems entirely reasonable to expect a very good explanation as to why those…nine auto parking places…are so important that arrangements haven’t been made to provide parking for purposes they’d be serving, elsewhere, or eliminate them entirely.

If those…nine auto parking places…serve some dire need, then fine, but somebody had better have a very good answer for why they think they have to be there. Otherwise, out with them.

Does PBOT study bike traffic at all? Even a casual observer would conclude there is no need for this project! Time and energy would be better spent on improving North-South access throughout Eastside Portland.

Huh? the reason there isnt much bike traffic through that region is that people avoid it and take the long way around to avoid the inherent dangers of riding through the lloyd. You dont put in roads where the traffic is, you put roads between where the people are and where they want to go. Where do you think the eastside needs help?

are
Reply to  kittens

If this project happens, I will likely switch from taking Tillamook and dealing with the Broadway bridge approach mess; instead opting for this route and a ride down the East Bank Esplanade.

The Lloyd District has about 1/3 the workforce we have downtown, but very poor access in and to the area! This is a critical component identified in the Bike Master Plan (a priority area similar to downtown.) It has been long neglected, in part by the city and by the land owners.

It’s interesting to find that the that plan PDF that is linked to shows that the parking lot bounded by 7th, Multnomah, 9th and Holiday has more than 70 unoccupied parking spaces and that the top level of the Parking Garage on the NE corner of 9th and Holladay has only 5 occupied spaces.

Clearly the preservation of 33 on street parking spaces is what the Lloyd District requires to accommodate those who travel to it.

That said, however the sausage gets made, I’d be happy to see these changes come to Holladay and also to the important N S corridor of NE 9th.

I would hazard a guess that the lot is undersubscribed compared to the garage because folks have a chance of parking out of the weather if they drive into the garage.

I heard that automobile users actually melt if they get wet, and, that real estate agents are telling folks that it doesn’t rain much in Oregon.

Getting from 11th onto Holladay is going to be interesting with all of the MAX tracks.

I think Ashforth, PDC, and other interests prefer to see street parking stay on Holladay because developers and storefronts really like them for business patrons arriving by car (banks, sandwich shops, coffee shops, etc.). The district is just as confusing to figure out in cars as it is for bikes due to the superblocks, so drivers are likely to give up looking for convenient space and go somewhere else. Also, some buildings will have no loading/unloading locations near front doors, which leads to delivery vehicles stopping in bike lanes. I doubt this solution will totally alieve those fears completely, as there is obviously plenty of overall parking supply in the area. It’s more about accessible parking for quick stops at storefronts, which everyone would like to see more of as many of these parking lots develop over the years.

That said, about half of employees in this district arrive by means other than driving, so this is a great improvement overall!