Mark Bosworth is still missing: Updates on the search 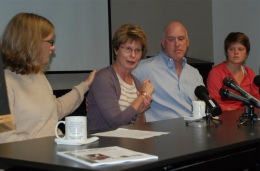 The Bosworth family at a news conference yesterday.
(Photo: FindMark.org)

It’s been a while since I shared any news about Mark Bosworth, the 54-year-old man who went missing from a Cycle Oregon campsite in Riddle on September 16th. While there are no solid leads or major developments to share at this time; there are several updates about the case that are worth your attention.

Since the search shifted gears and left the Riddle area, family and friends of Mark’s have launched a massive online effort to spread word of his disappearance far and wide. There’s a new website, FindMark.org, a very active Facebook page, and a Twitter account at @findmarkb.

Media coverage of the disappearance has continued and noted bicycle racing legends Greg LeMond and Lance Armstrong have both shared links about Mark’s search with their hundreds of thousands of followers. 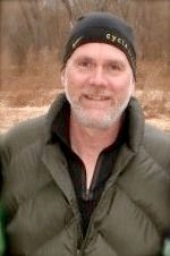 Casting a wider geographic net, offering a $10,000 reward, and working to spread the word online have resulted in 100 calls into the Douglas County Sheriff’s tipline as of yesterday afternoon.

A woman called me yesterday to say she was “100% sure” she had just spoken to Mark at the Lloyd Center Mall (yes I reported the tip immediately). On the Find Mark Facebook page, there have been reports that a man fitting Mark’s description has been spotting walking along I-84 near Corbett out in the Gorge.

Yesterday, Mark’s two daughters and his wife held a press conference at Metro headquarters (where Mark works) in Northeast Portland. The main goal of the event was to share updates about Mark’s medical condition and why they think it impacts the search.

It has been widely reported that Mark seemed confused in the days leading up to his disappearance. So much so that he had trouble following route signs during the one day he rode on Cycle Oregon (he was there as a volunteer). Mark is a two-time cancer survivor; being diagnosed with non-hodgkins lymphona in 2007 and eye cancer in 2009.

Yesterday, Mark’s family revealed that weeks prior to Cycle Oregon he had complained of headaches and often repeated himself to his daughter Kelly.

Putting all these pieces together, Mark’s doctors now say they fear his cancer has returned, and that it’s likely affecting his brain.

Right now the focus is on spreading word about Mark — and the missing person flyer — as far and wide as possible. There’s also talk that a bike ride to raise awareness for him might be planned in the Portland area soon.

Please stay tuned and if you think you see Mark, the family asks that you call 911 immediately. If you hear of a tip secondhand or think you saw him at an earlier date, call the Douglas County Sheriff’s Office tip line at (541) 957-2099.

Thanks for continuing to cover this story, Jonathan. I would request that your readers share the story on their Facebook pages and Twitter feeds, and download the “missing” flier from FindMark.org and distribute it wherever they may happen to be. There’s a Google map that shows places that they have been posted, so feel free to add to that effort. It will take thousands of people looking for Mark in order to find him, so please do whatever you can to bring him home safe and sound. Thanks!