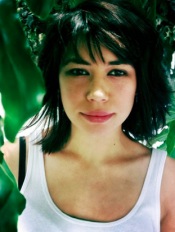 Jocelyn Young, a 24-year-old woman who graduated from University of Oregon and had lived in Portland has died following a hit-and-run collision in Pasadena, California early Sunday morning.

According to the Pasadena Star News, Young fell off her bicycle while riding on Los Robles Avenue and was then run over by a man who was driving by. The man, 21-year-old Nicholas Avila, did not stop and was later arrested and booked on suspicion of hit-and-run and driving under the influence. He’s being held in jail in lieu of a $100,000 bail.

Young died yesterday from her injuries after being transported to a local hospital. 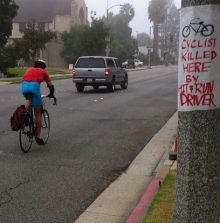 Scene of the collision.
(Photo by waltarrrrr/Flickr)

Young had many friends in the Portland area. Andrew Plambeck attended UO with Young and reacted to her death today. “We had a lot of close mutual friends. She was such an always-on wonderful presence. Always warm and cheerful. So, so sad. Another wonderful, unique person killed senselessly in the road.”

For more on this story, see an updated story in the Pasadena Sun.

Really sad and my condolences to her friends and family.

So much sad news on bikeportland this week. Beginning to look like the obituaries.

So sorry this happened.. deeply saddened by this loss..

ditto. this is sad for all involved. peace to you J.

That’s really sad. Glad the driver was followed and caught and that he was arrested for vehicular manslaughter and not just a hit and run causing death as in this case: http://www.cbs8.com/story/15441987/hit-and-run-driver-who-struck-bicyclist-in-encinitas-sentenced

This calls to mind the concept of ‘Fallbreite’ in Germany, which identifies the proper berth to give cyclists you are passing as equal to the width of road they could be expected to occupy if they fell over.

That’s technically required by law here in Oregon, drivers just don’t pay any attention to it.

Only at certain speeds.

middle of the road guy
Reply to  Spiffy

then they would just fall off in front of the cars and get run over.

q`Tzal
Reply to  middle of the road guy

This would be a reasonable conclusion if all actors on the road were non-sentient bodies in motion in the vacuum of space.

The reality is that no matter how much an auto driver hates a cyclist in front of them there is much less of a chance of the aware driver running over the cyclist in front of them because the act of doing so is a deliberate act.
In passing too close, or even side swiping, a cyclist on the edge of the road the auto driver can claim, with varying degrees of believability, that they did not intend to impact the cyclist.
When the impacted cyclist is directly in the path of travel of the auto, the driver must make a choice of claiming ignorance, blindness or momentary insanity.

The average person driving a car wants nothing to do with a cyclist blocking their way; the driver wants to pass you and never see you again. If they injure or kill you then they are going to be stuck dealing with you and the legal system for months.

Funny I just read this years later after my neices’ death, but I’m not sure when was the last time I’ve been so offended. This article was about a life that was lost over a hit and run driver, that was intoxicated…thank god for the person that followed the killer and he could be prosecuted. So please keep your “reasonable conclusions” to yourself. Obviously you’ve never lost a loved one in a hit and run, it’s not about the “vacuums of space” it’s about stopping when you’ve done wrong…not just driving off like you didn’t run over a human being and ultimately taken their life or as you would say “Non-sentiment bodies” from this earth.

Mike Fish
Reply to  middle of the road guy

Do you have anything to say about the person who just got killed? That happens to be what this story is about.

I went to college with Jocelyn, and she was easily one of the most unique, outgoing, enjoyable people I have ever known. She will not be forgotten, and is already missed deeply.

And because California really doesn’t care about highway safety, chance of prosecution is zero. I expect the charges to be dropped at any moment now.

I drive by this road (los robles) everyday for work. I was also contemplating biking to work as well. This road’s speed limit is 30 miles per hour. A lot of people ignore posted speed limits there unfortunately. Today I passed by the place where she unfortunately got hit and someone placed a bicycle there painted in all white to mark the sad reminder that a young lady passed away here.

oh jocelyn. you beautiful funny creature. take care out there, we miss your bright smile.