From the Strip to the ‘Alley’, advocacy happens at Interbike 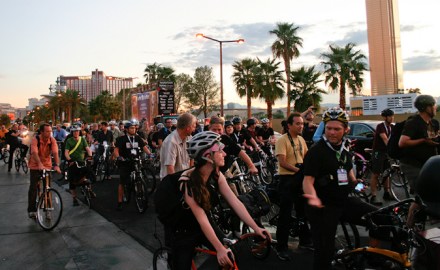 While it might not seem like activism to some, the 100-strong mass of people on last night’s BikeHugger.com Mobile Social left a big impression on the Las Vegas Strip in more ways than one.

Interbike is an industry show. It’s about the stuff. There are glimmers of activism and advocacy, though, around the edges.

“As I’ve learned from Portland’s bike fun scene, something billed as “fun” can also end up making a statement. Over 100 smiling, attractive people riding down the strip on bikes certainly makes a few statements in this town.”

Here at Interbike, activism sells. Or at least, the imagery and vocabulary of bike activism sells. The language and iconography of raised fists and active revolution is a crutch in “edgy” “urban” bike marketing. Actual activism is pretty much absent from the showroom floor.

When the lights dimmed at the end of the day yesterday, though, Interbike, and Las Vegas, got its annual injection of activism. D.L. Byron, of the blog bikehugger.com, organized this year’s “Mobile Social,” a ride that cruises past the glimmering casinos of the strip and, this year, ended at a New Belgium-sponsored block party.

As I’ve learned from Portland’s bike fun scene, something billed as “fun” can also end up making a statement. Over 100 smiling, attractive people riding down the strip on bikes certainly makes a few statements in this town: 1) Bikes can get you places. 2) A Hummer limo’s length of bicyclists is a LOT of people. 3) These people on bikes are having a lot of fun. 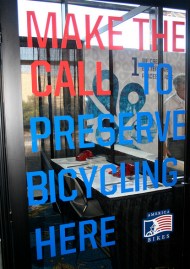 Bikes Belong had red phones
set up so people could call their
Senators. It worked!

Advocacy is mostly relegated to “Advocacy Alley.” Alleys, I should note, are usually between things and, thus, somewhat central. Not so with “Advocacy Alley.” It’s literally outside of the show’s doors. Bikes Belong, the US big bike-industry fueled advocacy group made about as big a spash as you could make in the alley, though, with their booth of “red phones.”

Throughout the day, show-goers were invited to enter the booth, call their elected representatives and speak up about bicycling. I even picked up occasional talk of yesterday’s transportation bill drama over the Transportation Enhancements (TE) program. The only place on the show floor where advocacy was front and center was during Planet Bike’s advocacy meetup. Beer and snacks flowed while industry, retail, media, and advocacy folks talked TE instead of MSRP.

Here’s a shot of Jim Sayer (Executive Director, Adventure Cycling), Randy Neufeld (Head of SRAM Cycling Fund), and Jay Ferm (Advocacy Director, Planet Bike), at the advocacy meet-up. The trio were elated after hearing the news that the TE program (an important federal funding source for bike projects) had survived the chopping block. 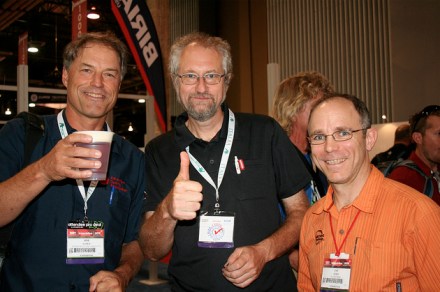 We were WAY longer than a Hummer limo.

This article has wayyyyyyy too many unnecessary commas.

Thanks for the report, I’m glad to hear that advocacy is taking a front seat at Interbike.

It makes good sense. Without specific provision of funding for bicycle infrastructure, I’ve noticed that it’s impossible, unfeasible, or suicidal to ride a bike for transportation here in the US of A. Funding for infrastructure = more people who can choose to ride a bicycle = more bicycles and accessories sold.

The red phone idea is a good one. Maybe we could do that sort of thing in Portland — set up a land line along a busy bikeway and invite people to call in when there’s issues at PBOT, Metro, ODOT, or the feds. Hot-button issues, like getting support before votes…

Ted, I don’t think advocacy IS taking a “front seat” (so carcentric, Ted!) at Interbike. My point was that at least advocacy is along for the ride.

Vote Up0Vote Down
« ‘Cross Conversion: Get your (non-cyclocross) bike ready for the season
Tacks on Vancouver Ave bike lane cause several flats »