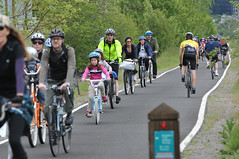 The Springwater Corridor Trail is one of many
projects around the region funded
by the federal Transportation
Enhancements program.
(Photo © J. Maus)

National bike advocacy and transportation groups are pulling out all the stops to help preserve the Transportation Enhancement (TE) program, a vital source of funds that has existed for two decades and this year alone pumped about $700 million into bicycling and walking projects (which is just a paltry 2 percent of the total spending).

The transportation bill is long overdue for a re-authorization, but yesterday the House and Senate agreed to yet another six month extension. Advocates breathed a sigh of relief when the agreement was a “clean” extension, meaning all existing programs would remain in tact. However, that agreement is set for debate in the House today on Capitol Hill, and advocacy groups’ worries now shift to making sure it stays clean.

At the crosshairs of concern is Senator Tom Coburn (R-OK), who has threatened to hold up the federal transportation bill if the TE program remains in tact. Coburn wants to strip dedicated funding for bicycling and walking. Without TE, biking and walking projects would remain “eligible” for funding, but it wouldn’t be guaranteed.

Last month, the League of American Bicyclists made a compelling case that without a federal mandate, states would not voluntarily fund biking and walking at current levels.

“… all the evidence of the past 20 years and beyond suggests that mere eligibility is totally insufficient: most states will simply stop spending any of their Federal transportation funds on anything related to bicycling and walking.”

To help preserve dedicated funding, the League has launched, “I Bike I Vote,” a major campaign to urge Americans to contact their elected representatives and make it clear that these funding streams are important. This morning they sent out an email blast with the headline, “It is time to Save Cycling.”

Another group lobbying hard to save the TE program is Transportation for America. They say Coburn’s move would be “bad policy”

“Decimating this small funding source won’t balance our budget, but it will make our country a more dangerous place to walk or travel by bicycle — a dangerous proposition considering that 14 percent of all traffic fatalities are people on foot or bike. And it will reduce transportation options for Americans at a time when we badly need more.”

The Safe Routes to School National Partnership is also watching this debate very closely. They say if Coburn gets his way, not only would the TE program be terminated, “It would also mean that our chances of sustaining any funding for bicycling and walking (including for Safe Routes to School and Recreational Trails) in the long-term reauthorization bill would be more difficult.”

In the back of my mind during this debate is the larger question of whether or not we should continue to fight for dedicated funding, or whether we should acknowledge that special set-asides — especially in funds with such unfortunate names like “enhancements” — aren’t the right place for non-motorized transportation infrastructure.

Bike-sensitive infrastructure spending deserves to be on equal footing with more traditional, car-centric infrastructure. Not only that, but by defending set-aside funding pots (that also fund things like transportation museums for crying out loud!) it just reinforces the idea that bicycling is frivolous.

When will the time come to break from the budget crumbs offered to bicycling in special set-asides and compete head-to-head with the vast pots of transportation spending? How can bicycling ever get on the same playing field if we’re always wanting to play by special rules?

I know this isn’t the best time for an existential debate, but when is? We’ve got to start doing more to fundamentally reform the language/framing and policy around funding. If we don’t, we can look forward to more email blasts and “Save Cycling!” fights. In fact, we’ll be having this same fight six months from now when this extension (if it passes) expires.

UPDATE, 10:50am: The “clean” extension passed the House today by a unanimous vote. Read details on Streetsblog. Now it’s on to the Senate.

Come on Portland bicycle community, put your voice behind this one. The louder we’re heard the more funding there is for cities that only dream of being Portland!

This is several orders of magnitude more important than any other issue facing people who ride bikes in Portland. If you value what we have been able to build for bikes here, and want to see improvements of any kind in the future, take action on this issue now.

It’s too bad it can not be communicated that it is fiscally responsible to reduce the cost of infrastructure construction and maintenance, reduce traffic congestion and environmental impact and reduce costs of health care by providing walk and bike facilities especially since, in my belief, bikes and pedestrians pay more than their share of the cost of the infrastructure.

I wish Coburn would consider more of the equation than only the part that suits him.

The irony of this absolutely kills me, considering that Oklahoma approved State Bike Route 66 (Oklahoma’s first state bike route, which officially goes into effect November 1) the entire length of State Highway 66 largely because it would get TE funding to make it suitable to be the starting leg of USBR 66 along with K-66 in Kansas.

I hope that these guys in Oklahoma http://www.oklahomabicyclesociety.com/ are doing their share of lobbying their own senator as well as the various bike shops in his state

Coburn happens to be my senator right now. I already let him know where I stand and got a bicycle positive response from him, so I’m extra disappointed (but not terribly surprised) that he did exactly the opposite days later.