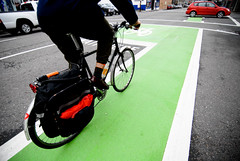 As we reach the end of a month that has seen a huge spike in bicycle/car collisions, the Portland Bureau of Transportation (PBOT) has unveiled a list of six intersections that will receive bike boxes and “crosswalk striping improvements.”

Here are the six intersections:

In a statement yesterday, PBOT said that the changes are safety upgrades intended to prevent crashes and make intersections safer. “Bike boxes and crosswalks heighten visibility and awareness of bicycle riders and pedestrians for motorists.”

Also in the statement, Steph Routh, the director of the Willamette Pedestrian Coalition said, “It would be great if every intersection had something like a bike box that allows better visibility for someone trying to cross the street.”

These projects are slated for completion by the end of September. I’ve asked PBOT for more information about how the locations were chosen, how much the projects will cost, and what exactly the crosswalk striping improvements will consist of. I’ll update this post when I hear back.

It would be nice if they returned to fix the bike box at SW Terwilliger/Taylors Ferry. It was a test, non-green treatment and has degraded to the point where the “wait here” is illegible.

I’ve had good luck contacting safe@portlandoregon.gov about restriping of bike lanes. I would contact them about this, too.

A-Dub
Portland relies on citizen reports for many of its maintenance auditing.

You can request that the bike box be repainted by calling 823-SAFE or emailing SAFE@portlandoregon.gov

You will get results this way. And if you send a photo with your request, you may get faster results.

I saw a new box show up at the bottom of the hill coming from Broadway bridge into downtown with a sign instructing people to stop behind it and let bikes use it. Really nice.

I was hoping to see SE 21st at Division.

Dr. Something
Reply to  Lazlo

Same here. I’ve always found it odd that this intersection didn’t receive the bike box treatment a long time ago.

jeff
Reply to  Dr. Something

i think when the Division Corridor project gets going, this intersection will be redesigned. Not sure when thge Division project is scheduled for (it’s funded) – you could check the City’s website & likely find out.

Yay for SE Cesar Chavez (39th) and Lincoln. Been wanting a box there for ages now as there’s just so much confusion every day by both drivers and cyclists on what to do.

Yay x 2. Actually, i go thru there almost every day and find it remarkable how little confusion there is – My hope is that it will serve to reduce motor vehicle traffic on Lincoln a bit…

Lincoln @ 39th is on my commute too, and I think that a bike box is not the correct treatment there — what we need is an indication of where the bikes should line up.

I think the place that makes the most sense is to the left of the car lane, allowing cars stopped on Lincoln to make right turns on the red (as is currently the case). That, in combination with clearly marking the sensor that bicycles use to trip the light, should do it.

I bike through there year round and have never had any problems. Adding a bike box there screws up the intersection for cars without yielding any substantial benefit for bikes — what’s the point?

I’ve been riding through that intersection daily for the past three years and whereas the incident rate is low, I’ve seen my share of close calls. Really it comes down to doing *something* to clarify the situation. Some people line up to the left of the cars, except numerous times I’ve seen drivers swing around the corner not realizing that the intersection is blocked. I tend not to stay there anymore for fear of getting rammed. Some people line up on the right, but that can block right-turning cars, as you pointed out. I perhaps have less sympathy for the drivers on Lincoln than you, since I feel most of them are using it as a cut through, but really there’s no purpose in inconveniencing drivers if there’s no reason to, and it will only serve to further anti-bike-infrastructure backlash (and boy, have I seen plenty of it around the 50s bikeway project).

Perhaps it would make sense for us to reach out to PBOT and propose an alternate design that clarifies how the intersection should work but isn’t as drastic as a bike box? A simple timed light and dedicated spot for cyclists would go a long way.

We need all intersections to have green boxes! If they’re not there, drivers seem to proceed with reckless abandon toward peds and bikes.

Can they do anything about the left from 7th to Madison? Except during rush hour, its a blinking yellow, but I’ve very hard be able to get across due to oncoming traffic. Its usually much faster to take the 2 crosswalks.

My block is getting a bike box! HOORAY!!!

Great selection by PBOT. These are all definitely high-priority locations. Especially good to see the ones on E/W neighborhood greenways across 39th, er, Cesar Chavez (sorry, no idea how to make the accent on this PC keyboard, though on a Mac it’s easy).

Regarding Steph Routh’s comment, I would point out that the Cesar Chavez/Lincoln intersection does have a lead pedestrian interval (LPI). Unfortunately, a lot of cyclists on Lincoln apparently can’t wait an extra two seconds and also treat the LPI as a green light.

Eliot, that’s what I meant about “clearing up the confusion”. With any luck they’d actually install a bike-specific signal as well.

“Unfortunately, a lot of cyclists on Lincoln apparently can’t wait an extra two seconds and also treat the LPI as a green light.”

I feel like that’s unnecessarily dogmatic. I think all road users should cooperate to get as much traffic — bikes AND cars — through that intersection as possible during the relatively brief red lights on SE 39th. The way to do that is for bikes to cross on the pedestrian green, (obviously, yielding to pedestrians as necessary). I do not see what is gained by waiting for the green light, thereby minimizing the opportunity for cars to turn left across the flow of bike traffic.

What do you see as the benefit of waiting for the green light, rather than crossing on the pedestrian walk light? Remember, Oregon law allows bikes to use crosswalks like pedestrians if they are traveling at walking speed — is this so different?

The difference is that running red lights is illegal, and sets a bad example. Individuals don’t get to pick and choose which traffic laws to follow by which ones make sense to them and which don’t. If a person on a bike mounted curb and waited on the the sidewalk for the light to change, of course there’s nothing with them using the crosswalk at a walking pace.

What’s the orientation of the box at Alberta and Interstate? I ask because I live on Alberta, two blocks from Interstate, and haven’t noticed a problem with right hooks there. The problem is the length of the left turn signal from Interstate Northbound to Alberta Westbound: sometimes, even if I’m at the front of the line and jackrabbit off the line at the green light, the light turns red before I’m through the light! It seems to be wired for faster traffic.

All the turn lights on interstate are too short. I find if I’m not first or second in line its better to do a box turn and act like a pedestrian on the side walk.

I’m wondering how well the boxes on streets with bike lanes and moderate car traffic will work (like 26 & Powell or Gladstone and Cesar Chavez), with cyclists lining up at the box and then having to file back into a line. Will there be any sort of diverter treatments or other redesign associated with any of these?

Alexis
Reply to  Dr. Something

This is already the situation on Hawthorne at 7th and 11th, except that Hawthorne has heavier traffic of both types. I haven’t seen it cause an issue — people get back in the lane and everyone gets to go pretty quickly. I’m ecstatic about the treatment coming to 26th and Powell — it’s part of my commute and the potential for right-hooks is high since many drivers and almost no cyclists want to get on Powell. I routinely get cars turning in front of me on red (prompting me to wish we had a state law for “no right on red if cyclists present”!). I usually try to position myself to be visible but it can be difficult depending on the situation, and people still go around).

I also would like to see one at NW 14th and Everett.

Even better, every third street is closed to cars and the stop signs get turned to give bikes the quickest route.

Interstate and Alberta? Why not Interstate and Lombard? That is a much busier place with more accidents happening there.
Personally I still believe this is not the right answer to the problem. I admit there is a problem and it needs to be addressed. I think it is better to have a shared turn lane with cars and bikes. If a car is turning and dosent see a bike coming up from his rear, while he is watching cross traffic both ways and cross walks both ways and finds a spit second where it is clear to go and some bike decides to come up and pass a car turning- then it is obvioussly a flawed system. If bikes are in line with cars they won’t get right hooked

Maintaining the ones already installed on the SW side would be appreciated. The one on Terwilliger near I5 has been wore out for a long time….not to mentioned the completely missing bike lane on barber. I am all for adding more, but we need to maintain what we already have too.

Very happy to see more of these going in. But. What, nothing at NW 14th & Everett? You know, the scary intersection with major car traffic hurtling off the freeway offramp a mere one block back, and right-hooking you at high speed to get onto Everett Street? Really?

And why only six new bike boxes? We need more like two hundred new bike boxes. In Europe, I heard about one city that decided to begin installing bike boxes. Within a few months, they had ONE THOUSAND FIVE HUNDRED of the things. That’s how to do it!!

Congrats to SE Portland for getting more love from PBOT – 5 out of 6 improvements is a nice percentage.

Agree with A-Dub above that the boxes on Terwilliger at Taylors Ferry need green thermo plastic. I did the PBOT bike counts at this intersection on Aug 4th, 2011, as I have in 2009 and 2010.

The painted white box on Terwilliger southbound was in good shape and getting decent compliance from motorists, but the painted lines of the northbound box are obliterated by the heavy traffic and right turn movements (eastbound down Taylors Ferry). Very poor “compliance”.

A question for all you SW Portland commuters out there: Is there a need for / would you support green bike boxes on Terwilliger at Capitol Hwy (east of Hillsdale)?

Keep in mind that bike boxes mean “no right on red”, ie longer lines of cars backed up north and south on Terwilliger…

what about SE Hawthorne at SE Grand (at the foot of the eastbound viaduct)? That’s the intersection on lower Hawthorne that needs it the most.

You know, you’re absolutely right. Funny I never thought of it before, but that intersection can be even worse than the westbound ramp.