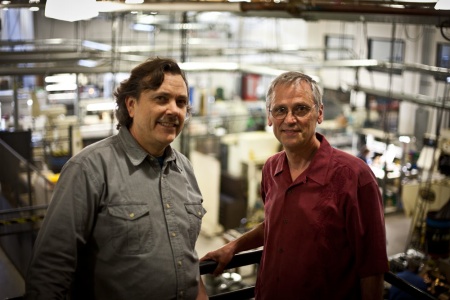 U.S. Congressman Earl Blumenauer is well known for this bicycle advocacy on Capitol Hill. But recently, he’s gotten an up-close look at another side of Portland’s bike scene — the burgeoning and vibrant industry. This month he’s visited the headquarters of two local companies that manufacture bike products. 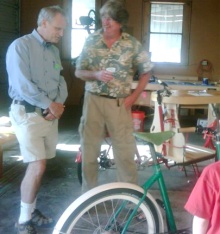 Last Saturday, Blumenauer was just out for a walk by himself near SE 17th and Powell when he happened upon dozens of people on cargo bikes assembling near the headquarters of Ecospeed, a producer of electric-assist systems for bicycles. According to Ecospeed owner Tad Beckwith, the curious Blumenauer walked over and poked his head into the shop.

“He said he was just walking around,” Beckwith recalled, “when 40 or so cargo bikes rolled into our parking lot. It was really perfect.” 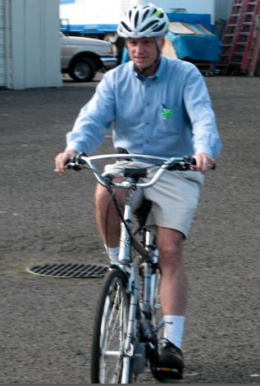 Blumenauer on an Ecospeed-powered bike.

Turns out Ecospeed was a stop on the Pedalpalooza Cargo Bike Parade event.

Beckwith says he gave the Congressman an impromptu tour, pointing out their current collaborations with other local bike companies like TerraCycle and Metrofiets. When Blumenauer said he wanted to try an e-assist bike out for himself, Beckwith was happy to oblige.

“I met a man who, instead of buying a diesel VW Jetta, he and his wife bought a cargo bike with electric-assist. It took the place of a car for them.”
— Earl Blumenauer

“He had a big smile when he was done and said he liked it and would like to have us come over and share the bikes with his staff. He and Brent [Bolton, an Ecospeed employee] were talking about how cargo bikes are a really good car alternative for families.”

On the phone this morning, Blumenauer told me when he saw the Ecospeed parking lot “awash in cargo bikes” he couldn’t resist stopping in. “I met a man who, instead of buying a diesel VW Jetta, he and his wife bought a cargo bike with electric-assist. It took the place of a car for them.”

“Today e-bikes are dominated by cheap imports from China,” said Blumenauer, “But we’ve got some people here able to develop high quality products.” 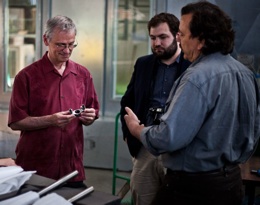 On June 9th, Blumenauer got a look at Portland’s largest bicycle parts manufacturer, Chris King Precision Components. With 88 full time employees at their northwest Portland facility, King is a major success story. They compete in the global market with 100% U.S. and Portland made products, they are very conscious of their environmental footprint, and they go the extra mile to encourage bike commuting for their employees.

“They’re exporting over 40% of their product, all of which are made in my congressional district.”

Blumenauer and his business, tax, and labor liaison Ree Armitage got a comprehensive tour of their facility and spoke at length with company founder Chris King. Blumenauer said his tour of Chris King’s facility was, “very exciting.” “They’re exporting over 40% of their product, all of which are made in my congressional district.”

I shared my dream with Blumenauer of having a bicycle manufacturer based in Portland that can make (and export) thousands of bikes a year. “100 years ago,” he shared, “10% of the city’s workforce in Hartford, Connecticut was bike manufacturing. It’s slowly but surely coming back and I’m glad we’re starting here.”

Find myself thinking “this is good but is it just happening now? Shouldn’t these sorts of cycle advocates, corporate citizens, have been visited already and consulted regularly?”

I’ve met Congressman Blumenauer and I’m sure he’s got plenty on his plate. I’ve always found him to be very accessible, at least via email. Good on him for representing us bike-riding liberals and keeping himself updated concerning the average (wo)man on the street.

Now if only King products were affordable to most people!

C'mon
Reply to  middle of the road guy

I very much represent most people by my not so great income and lower middle class standing. I have King Headsets, Hubs, and Bottom Brackets on all of my bikes. If one believes in keeping their neighbors employed then this is very easy to do. I’m happy to pay for quality parts made locally with a 10 year warranty. As for healthcare, well, that’s a bit different…

Poor Chris looks a little chunky for a cyclist…Business is good.

All digs aside, good on him for employing locals and running an environmentally concious manufacturing outfit. I buy his products because they’re made right here and that means something. Keep up the good work!

N.W. Portland (King’s Portland facility) is in David Wu’s Congressional District #1, by the way.
Hopefully somebody is confused, and probably not Earl.

I’ve heard through the grap-vine that Chris King was (probably still is) one hell of a cyclists back in his day–doing the type of riding you see represented by the Rapha Continental Team–long days in the saddle, steep ascents, gravel roads, beautiful vistas and all the like; not to mention on steel bikes, with threaded headsets, and downtube shifters…

I imagine it’s quite the commitment when you run a company the size of his, then you have to factor in family and friend obligations. Riding full time takes a back seat…

I think Mr. King is very into culinary these days, bikes too but food as well.