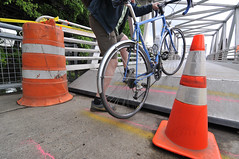 This photo — taken just minutes prior to the
closure — shows how high water has impacted
the floating portion of the Esplanade.
(Photo © J. Maus)

The floating portion of the Eastbank Esplanade closed due to high water on the Willamette River eight days ago (May 31st). According to an update from Portland Parks & Recreation, since river levels look to remain high “for the foreseeable future” it will, “likely be close to a week” before they will reopen the Esplanade.

PP&R spokesman Mark Ross told us this morning that floating portion of the Esplanade between the Steel and Burnside bridges will remain closed until the river reaches the 16 foot mark. According to data from the National Weather Service, the Willamette River hasn’t been at 16 feet since May 28th. At 8:30 am today, the level was measured at 16.62 feet:e 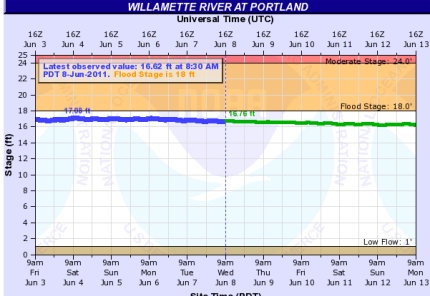 And here’s the actual chart PP&R is using to make their decision: 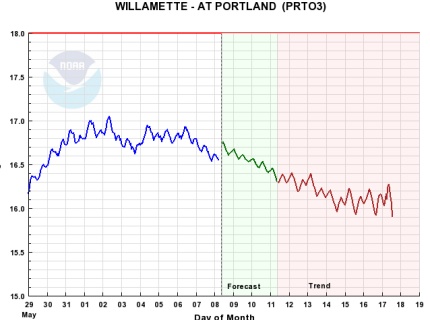 [You can track the daily level of the Willamette on the National Oceanic and Atmospheric Administration (NOAA) website.]

According to NOAA, the Willamette will remain between 16.5 and 17 feet “for about the next three days. After that, the river is expected to “slowly decline.” NOAA expects the river to be between 16 and 16.5 feet “into mid-June.”

Beyond the heavy rainfall we got this year and lots of melting snow, NOAA says the main reason the Willamette is so high is because of high water on the Columbia, which is expected to remain high for 2-3 weeks. Here’s more from NOAA:

“The high levels on the Columbia are what is backing up into the lower Willamette, keeping the Willamette high from below the Oregon City Falls downstream to the confluence with the Columbia.”

If you’re wondering why PP&R decided to close the floating section, Ross described the situation like this:

“If you have been over the walkway, you know its a fixed, permanent sidewalk that connects to a floating bridge over the water. When the water rises, the floating portion is the only part to rise, obviously, creating a phenomenon similar to if you had your arm stuck in an elevator shaft when the elevator started going up. Your arm will quickly increase its angle. That is the nature of what has happened to the connecting hardware between the bridge and sidewalk.”

Hopefully the detours around the Esplanade aren’t that painful. (PP&R says the detour is to cross over to the west side of the river via the Morrison Bridge, the Steel Bridge, and the Burnside Bridge.)

This is the first time in the Esplanade’s 10 year history that it has been closed due to high water and the highest the river has been since 1996.

How has the closure impacted you?

UPDATE, 10:09 am: Mark Ross just got an update on the river levels from NOAA. He says the predicted opening date is June 15th. See graphic below: 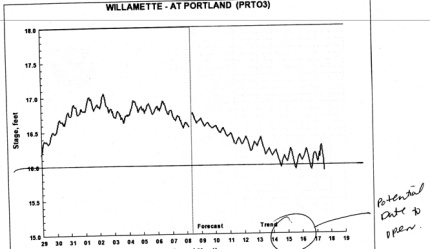 A great place for a protected cycle track would be the east side of Naito Parkway to relieve the Waterfront Park path which is always heavy with pedestrians and overall poor for bikes anyway (those ship docking cleats dont help).

I couldn’t agree more and I’ve lamented many times about the missed opportunity to do it when Naito was reconstructed a few years ago. A cycle-track on Naito/Waterfront Park is the type of major bike facility I would love to see Mayor Adams or the BTA get behind… but right now, much-needed bike projects in the central city just aren’t politically feasible.

I have to disagree with the city’s decision. First of all this is certainly a nanny-state decision. Cyclists all over the city successfully negotiate sidewalk curbs, potholes, and unimproved roads. Yes warning signage is very important, but to close it is going overboard (no pun intended). Especially when there are no detour signs letting people know what alternatives are available (there is none on the east side). Second there are more joggers, dog walkers, and pedestrians than cyclists on the esplanade who are not affected by changes of level. Does everyone have to be inconvenienced because of this?? How about a sign that says ‘proceed with caution at your own risk.’
I’m sure the parks dept. thinks that we’ll just forget about this like water under the bridge, but all of us who use car-free spaces have to support each other

This is not a nanny-state decision. This is the city limiting its own liability. If they leave it open, they leave themselves open to lawsuits. If they close it with the river above design levels, then anyone who injures themselves has no legal footing.

Also note that many non-cyclists still have issues – the elderly and the disabled, to name two groups.

I was there last night. The ramps were totally rideable.
The closure is a little much.

I decided to take the esplanade this morning to see what was up. Someone needs to tell Portland Parks that a sheet of white laminated paper with a message in 26 point font isn’t exactly the best way to get out a warning/detour message. If I wasn’t expressly looking for it, there’s no way I would have noticed the closure signs.

Aaron
I sure agree with you, but the fact is that someone could fall, or even stage a fall, then lawyer up and sue the city, the designers and the builders. The City would no doubt settle as that would be less expensive than court. I think it is less of a nanny state issue than a (justifiable) CYA issue. For all we know that suit might already be ongoing by the persons who have already crashed.

more importantly, which Pedalpalooza rides are going to be effected?

We tend to learn a lot about how a city supports bicycling based on how vital bikeway detours are handled. In this case, there are only a couple of signs warning of the closure and no information about the detour route.

I understand this is the responsibility of Parks & Rec, but I’d hope PBOT and PP&R would work more closely together to establish sensible detour routes & signage, whether it’s the Steel Bridge stuck open or the floating deck closure, we need to do better than this.

Can someone explain all the hoop-lah about a supposed water shortage in spite of things like this?

Is there a hooplah? Certainly not going to be a water shortage in the Willamette or Deschutes watersheds – the snowpack is on average at 128% of normal values.

I’ve heard the doomsday’ers say that soon water will be more valuable than oil, especially after that 9.0 earthquake hits us.

In the Pacific Northwest?

You have multiple issues with water availability. The first has to be clean water. There is plenty of water flowing through Portland, but do you want to drink it? What would it cost to make it drinkable? In the southwest, population growth is a real problem in the desert where there is not enough water for growth to continue without water use changes. Here, we shouldn’t physically run out of water, but quality is an issue. During low snow years, we can use up Bull Run, then Portland draws from wells which are in danger from groundwater pollution.

I feel that acronyms should be presented in long form the first time they appear in an article. Even if it is for an overly common institution such as NASA, USA, or BTA for example. I kept scrolling up to the start of the article looking for the long form of NOAA and couldn’t find it. I’m not sure that all readers will be very familiar with the National Oceanic and Atmospheric Administration and as a journalistic courtesy, it should be presented fully.

so do I! and 9 times out of 10 I do that. But sometimes I make mistakes. This time it was a simple editing error. Thanks for catching it.

we on the west coast are so hyper ADA compliant

Took them way too long to close this. Just about killed myself on my morning ride one day. No markings, no warning, nothing. Way to go city of Portland.

In the first or 2nd story about the closure on this website–I looked later, but it was already gone–a spokesman for the city promised expertly charted detours which would be prominently posted. Promised, but not delivered. When I rode north to work from Sellwood Monday, there wasn’t even any notice that the esplanade was closed except the gates that closed it. Suppose the Fremont Bridge was closed to cars the same way, with no warning signs and no detours posted. So long as bikes are not taken as seriously as transportation as autos are, bike commuting will not expand beyond the small number who are committed to it, as we are, for ideological or personal reasons. Or because we’re just weird. Even in Portland, that’s not going to be a lot more than are already doing it.

What is the penalty for ignoring a closure sign?

Obviously, a few people have been too oblivious and crashed.

Is there any actual legal concept of “at your own risk” in regard to transportation routes? My preferred solution is for the city to say that it is dangerous and that you’d be better off going elsewhere, but, if you decide to ride over it, its your problem if you crash.