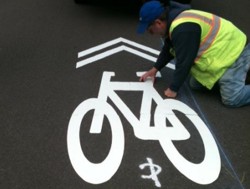 The small coastal town of Newport, Oregon continues to show exciting signs of life for bicycling.

Reader Daniella Crowder (she’s also co-owner of the Bike Newport bike shop) tells us the City of Newport is installing sharrows this morning on 6th Street. Crowder says she thinks Newport is the first coastal community in Oregon to use sharrows.

Sharrows, or shared-lane-markings, are a pavement symbol used to let road users know that bicycles are expected to use the full lane. Sharrows were given official federal blessing back in December 2009, which makes it much easier (bureaucratically) for city transportation agencies to install them.

Crowder says the new sharrows couldn’t have come at a better time. “These are being painted just in time for our “Bike to School with the Mayor Day” scheduled for this Friday.” Newport Mayor Mark McConnell is slated to join a group of parents and kids on Friday to help raise awareness of biking to school.

I’m coming to Newport this summer! I love visiting the coast, and I’d rather spend my money to support a town that invites cyclists.
I’ll be camping, but here is a groupon for a hotel (Twelve hours left to buy):
http://www.groupon.com/deals/best-western-agate-beach?c=dnb&p=6

Also worth noting that Newport has been putting in all kinds of transportation improvements in the “South Beach” area – near the Aquarium and the Hatfield Center – in advance of NOAA’s arrival. Original plans showed bikeway and sidewalk improvements…

Newport is easily my favorite coastal town in Oregon. That was true even before it became so bike-friendly, so this is just icing on the cake!

Are they putting sharrows on the Yaquina Bridge? Because that’s where I’ve had the most “share the road” type moments (most of them bad). (My theory: the blinking “bikes on bridge” lights prime motorists to be angry.)

Other than the bridge, I agree that Newport is a fine place for family cycling.

I’ve biked that bridge both ways, and it was certainly stressful. I might walk my bike on the sidewalk next time…less stress and then I can take my time and enjoy the view.

Its not the locals its the ppl coming in to visit that have bad driving habits. love Newport

Let me know when there’s a bike lane all the way from NW/NE 73rd in Agate Beach into Newport and the city decides to keep the paved verge & intermittent existing bike lanes free of debris.

Right now, the bike lane effectively disappears south of the Lucky Gap access parking lot (it appears at Lighthouse Drive). From there until a sidewalk starts just south of the Best Western entrance, bicyclists ride on the outside of the fog line (an area rarely cleared by street sweepers). That leaves bicyclists riding 3-4 feet away from double trailer trucks, McRVs, etc. & occasionally riding along the fog line. The speed limit is 45 mph, but many, maybe most, drivers go 50-55mph.

There’s no bike path, just sidewalk to ride on (if that’s legal) all the way through town. It’s a number of blocks going south before you can ride a block west & get onto a through street (like Nye St.) running parallel to the highway, i.e., get off the highway. On the east side, there’s no through street running pretty parallel to the highway until the carwash/Presbyterian Church (I’ve forgotten the street #). Until then, some people ride on the sidewalk, some ride in the right hand lane, which is their right but which clearly annoys some drivers.

Unless you take Oceanview drive which means you will ride along a road that’s already a tight fit for two standard sized vehicles passing in either direction (I believe it’s signposted as a bicycle route despite the narrowness of the road).

I used to ride my bike occasionally from home to downtown Newport, where I worked. After having my bike shoved around by the draft of double trailer trucks speeding by, and breathing in fumes of diesel trucks, RVs, & pickups going that long hill (going north) on just about every ride, I stopped. It was a pretty unpleasant ride. In the downtown/uptown area, I was almost hit several times by drivers who seemed oblivious to my presence, didn’t matter if I used hand signals (required by law for cyclists where I grew up) or not, had the required/recommended lights/reflectors,etc..

Cyclists have to use highway 101 to get from Agate Beach into Newport & to South Beach. It’d be nice if ODOT & Newport could cooperate to make it a more pleasant & safer experience for them–like a real bike path or lane (a separated path would be great) from Otter Rock to Yaquina Bridge. 101 from Moolack Shores to Otter Rock can be a beautiful ride–great ocean views. Unless you’re being forced off the road by a carelessly driven RV or other vehicle & dangerously close to the highway verge drop offs along that stretch.

I do appreciate that a new bike/pedestrian path is being built from the bay front to the highway and that the local loop bus(es) has/ve (or used to) a rack for bikes.

If the city planning commission/city council would amend the commercial & government building ordinances to mandate not only so many motor vehicle parking spaces, but also so many bicycle “parking” spaces (bike rack spaces) w/50% being covered spaces (since it does rain alot on the coast) that too would make it easier for people to use bicycling to meet at least some of their transportation needs. The Amtrak station in Albany has some nice covered bike racks & I think even some lockable bike storage lockers.

Newport is awesome – Cycle Wild had a great experience there overall last September. I’m bummed that I won’t be passing through on my cross-country trip this year, but I think Cycle Wild may make a return trip next year to that fine city.

Thanks to Newport, its Mayor and the Crowders! Look forward to the next bike trip to Newport.

I’ve been cycling/commuting in Newport for 30 years and am stoked that City officials are finally improving conditions for cyclists. I don’t use Hwy 101 unless I have to. The Oregon Coast Bike Route has always been my preferred north/south route while commuting from Agate Beach and across the bridge into South Beach. The flashing lights and lowered speed limit on the Yaquina Bay Bridge have helped in the motorist awareness category but I have to agree, there must be a better way. BTW, I find that when I “take the lane” on the narrow streets and bridge, to keep the motorists from making a bad decision to try and pass me, has helped me safely negotiate these areas.

This is a link to the new VERY AWESOME bike map for Lincoln County. Newport is listed under the Central map.

There are alternative routes through Newport – other than Hwy 101. Oceanview Drive – Coast road – but also Nye Street, Eads, etc. The maps give nice detail of which roads are narrow, which have shoulders, etc.

Hopefully, the city will put in MORE Sharrows as more bikes come to Newport! Yes, putting Sharrows on the bridge would certainly help…but it doesn’t stop people from looking at the view whilst driving. That’s never going to change.

Wouldn’t it be awsome if they made a bike path from Beverly Beach to Newport. I hope ODOT reads these comments.