[This article is written by Chris Smith. Smith is a former City Council candidate and current City of Portland Planning Commissioner with a long list of transportation activism palmarès.]

“Many of the economic interests at the table are simply unwilling to agree (or sincerely unable to believe) that we can grow the Central City economy without growing the vehicle miles traveled (VMT).”

A little over a year ago Portland City Council adopted the Portland Bicycle Plan for 2030 with much fanfare. And since that time we’ve had both highs and lows. On the positive side, we’ve seen some very solid expansions in the Neighborhood Greenway network and development of a cycletrack in the Cully neighborhood.

On the less happy side, as Jonathan has editorialized, we’re finding strong resistance to proposed bike facilities that increase safety or capacity at the expense of taking a bit of pavement away from motor vehicles.

Wasn’t the master plan supposed to (excuse the pun) pave the way for this? Let’s go back to the plan and check. Here’s a critical item from the implementation strategy (p. 116 if you have your copy handy):

5.1A Amend the Transportation System Plan (TSP) to adopt recommended policies and classifications for bicycle transportation. 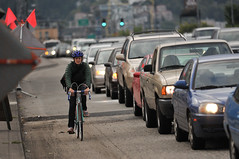 Well, that hasn’t happened yet. And until it does, the Bike Plan is just one of many plans sitting on a shelf.

The policies we advocated for, like the “Green Transportation Hierarchy”, are not yet undisputed City Policy. So it may be relatively easy to do low-conflict things like creating more greenways; but when push comes to shove, City traffic engineers do not yet have a set of rules that allows them to give strong preference to walking and biking over driving. 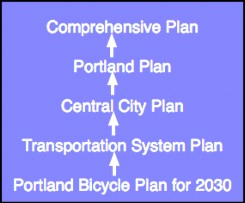 So how do we fix this? The City is currently engaged in the Portland Plan, a 25-year strategic plan that covers everything from housing to the economy to — you knew it was coming — the transportation system. Once that plan is set, the City will update its Comprehensive Plan, the foundation planning document for the City, which includes the Transportation System Plan. That’s the path to the critical implementation step above.

And it’s not a slam dunk. There are many competing goals and interests in the Portland Plan. You can be sure that freight interests will be advocating for the needs of goods movement, and we know that has trade-offs with cycling infrastructure. And cars have their advocates too.

A great example is a current discussion around the Central City Plan component of the Portland Plan. We have some interesting goals for the Central City. By 2035, we’d like to:

We want to use the same streets to move a lot more people while using less energy and producing fewer emissions — an ambitious goal! It’s pretty clear that we have to use our assets a lot more efficiently, and it shouldn’t surprise anyone that I’m advocating for developing protected bikeways in the Central City as a key strategy (along with more/better transit). 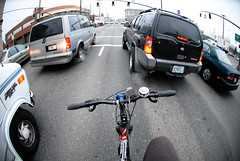 There is general agreement that the growth in trips to the Central City is going to have to come via modes other than drive-alone automobiles.

But where we don’t have consensus yet is that to do that, we’re going to have to take some of the right of way dedicated to motor vehicles and re-allocate that for bikes and transit in order to generate the growth in total trips. Many of the economic interests at the table are simply unwilling to agree (or sincerely unable to believe) that we can grow the Central City economy without growing the vehicle miles traveled (VMT). They will concede that per-capita VMT will decline, but they are not signing on to the idea that total VMT will decline, even though the Climate Action Plan is crystal clear that this must happen on a city-wide basis.

“… When push comes to shove, City traffic engineers do not yet have a set of rules that allows them to give strong preference to walking and biking over driving.”

But here’s the conundrum — if we don’t give over some auto right-of-way to bikes and transit, how will we get the growth in those modes necessary to meet our overall trip growth goals?

And I believe that is exactly the debate we’ll have throughout the city where we attempt to carve out bicycle right-of-way. (We’re already having the debate on Williams Avenue and in the Lloyd District.)

Every advocate who cares about bicycling should be aware of the Central City Plan Update (CC2035), the “Healthy Connected Neighborhoods” thread of the Portland Plan, and push for their eventual enactment into formal policy via the Comprehensive Plan.

The next major round of public input on the Portland Plan will be this summer as we review the first complete draft of the plan. Until then, you can follow the plan on Twitter or Facebook.

Thanks for publishing this, Jonathan. I had to look up what palmarès meant 🙂

As someone who bikes every day for transportation, I believe that freight and the movement of goods need to be accomodated if we are to have a strong economy. People who insist on using a car to move just themselves a few miles, not so much.

Fantastic summary, Chris. Thanks for showing us the path from our current status in a PBOT plan to the full support of bikes in citywide policy. This path is at least as important as the work we are doing on specific projects on N. Williams and in the Lloyd District.

Help us represent the bicycle side of this issue today at 3pm at the Stakeholder Advisory Committee for the current Lloyd District projects. Details in upper right of http://www.portlandonline.com/transportation/index.cfm?c=53906

I think you hit the nail on the head, Chris, when you said that the “economic interests” are unwilling or unable to believe that non-automotive vehicles can contribute to total VMT.
I’d rather not litigate the issue but with some of more obstinate “economic interests” it may be necessary to legally force the government to recognize bicycles, mass transit and even pedestrians as part of total VMT.

I have little hope for swaying the minds of obstinate “economic interests”; that same bullheaded tenacity is likely what got them in to a position of economic power.
When a business person has succeeded by ignoring everyone who said they where crazy or wrong they aren’t likely to acknowledge people who suggest ideas that they believe will hurt their profits.

I downloaded the 23mb pdf “Goal 6: Transportation” from the Comprehensive Plan and it seems like the goal statement is headed in the right direction:

“Develop a balanced, equitable, and efficient transportation system that provides a
range of transportation choices; reinforces the livability of neighborhoods; supports a
strong and diverse economy; reduces air, noise, and water pollution; and lessens
reliance on the automobile while maintaining accessibility.”

The last clause seems to suggest a willingness to “give over some auto right-of-way to bikes and transit” which is encouraging.

It’s a big attitude adjustment to think about ‘moving people’ rather than ‘moving vehicles’. It’s equally hard for some who believe that things can only work the way they’ve ‘always worked’ (of course before 1950 or so they didn’t actually work that way). The transition at the end of the era of cheap gas and easily widened roadways is going to take new thinking. But I’m optimistic that our city and region are well positioned to do that new thinking. But we have to work at it consistently and conscientiously.

“It’s a big attitude adjustment to think about ‘moving people’ rather than ‘moving vehicles’. …” Chris Smith

If there was proof, or even strong indication available to hesitant stakeholders, that dedicating a portion of roadways to bike infrastructure would increase their business, or increase the efficiency and speed by which freight could be moved over the road, support from those stakeholders would probably be there.

Is there any proof or strong indication that dedicating a portion of a given roadways’ width will increase the number of people being moved over that roadway? Not ‘can’, but ‘will’. Just because a bike lane is there, does not mean a significant percentage of the people presently driving (how about 10 percent…or 20 percent?) will leave the car at home and start biking on the bike lanes provided on them.