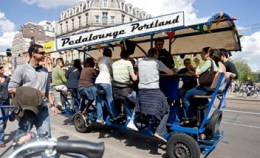 From tall-bikes to cargo-trikes, Portland is full of interesting, pedal-powered vehicles. Now you can add a party bike (or “cycle pub” as they’re sometimes known) to that list.

55-year old Northeast Portland resident John Boblett says he’ll start taking reservations for his “Pedalounge” 14-person-powered bike in the next few weeks. Boblett, a former bartender and FedEx truck driver will captain the contraption (and I must say, those are perfect qualifications), which he purchased in Amsterdam.


“I thought, why isn’t there one in Portland? With our love of beer and bicycles, it’s such a natural.”
— John Boblett, owner of Pedalounge

The Pedalounge will have room for 12 pedalers and two other passengers. Boblett will be at the helm to steer it, while others are free to chat and take in the sites. When it launches in early May, Portland’s Pedalounge won’t serve beer, but Boblett hopes that feature will be coming soon (once Oregon’s liquor regulations/laws get ironed).

Boblett, a native of Minneapolis, Minnesota, says he saw a party bikes for the first time two years ago. “I thought, why isn’t there one in Portland? With our love of beer and bicycles, it’s such a natural.”

Party bikes are spreading throughout the U.S.. Boblett says successful businesses have been created with them in Minneapolis, Chicago, Denver, Austin, Houston, and even in the central Oregon city of Bend.

Boblett says he’d eventually like to have 3-4 party bikes. He plans to offer two-hour “tours” where people sign up and get steered to local sights, stopping for drinks and photo-ops along the way. Prices for a two-hour tour will range from $310 to $350, depending on the day. “The more people, the cheaper the ride is!” says Boblett.

Boblett says he’s still working out the legal issues before he can serve beer on the bike. In Bend, the Cycle Pub has apparently received special sign-off from the Mayor, Police Chief, and City Attorney to dispense beer on the bike. In addition to chatting and drinking, Boblett will have a sound system so customers can hook up their iPods and rock out while they pedal through the city.

PURE AWESOME JOHN! We can’t wait to ride it!

Yes! Who can we bother about getting beer on this thing approved??

for time being, root beer topped with ice cream would be cool.

There’ll be a lot of huffing and puffing while chatting…not unlike talking on cell phone while defecating.

I sure wish I could edit my posts.

I saw one of these last week in Austin, TX while I was out on a business trip. The people on it were having a blast (and seemed pretty blasted).

As to drinking while riding, there are exceptions to the open-container law for charter vehicles. At a minimum I expect those should apply. But I think those only deal with BYOB, not sure they cover selling drinks which would probably be a much greater source of funds for an enterprise such as this.

Interesting. Has he been in touch with the city to determine the licensing / routing / legalities separate and aside from having beer on board? Looks like its got 4 wheels so it doesn’t fit the legal definition of a bicycle in Oregon (no more than 3 wheels) and its obviously to large to fit in a bike lane, so hopefully he gets the permitting right to operate on city streets.

Public health benefits, too. You can drink and burn it off at the same time.

There really are dozens of unanswered questions but the City people I have talked with seem supportive. This is new, so it’s understandable that we will have to work through the issues together. Similar to when pedicabs launched. They are concerned with safety…so am I.
They are concerned with how people will conduct themselves…so am I. This is a great, fun thing to do and it can be done responsibly and safely… and it can still be a blast. Hey, if Minneapolis can do this…say no more. John

Yes! I’ve always thought Portland could use a few of these. Good luck, John!

Two articles down the page there’s a serious article about riding and drinking.

And here we have the “Party Bike”/”Cycle Pub”, promoting riding and drinking.

How is it confusing? The person driving the vehicle isn’t drinking.

Unlike a car, a drunk passenger doesn’t have control of the vehicle, in this case the drunks are the engine.

Well,I highly doubt the people drinking on the party bike would actually be driving it. In the article it states “Boblett will be at the helm to steer it”. So, in my opinion it falls into the same category as having an adult beverage on a train or airplane. The captain’s sober (hopefully) so I don’t think there’s an issue.

This is pretty sweet.

I do doubt that if it came to be a drinking vessel, no drinker would be allowed to pedal, regardless of whether there was a sober captain or not.

The drinkers could not be relied upon to “not pedal” when needed. Would need to be run like a longboat…

I don’t know anything about the mechanics of how these vehicles operate, but it seems to me the best design would allow for the person driving the vehicle to manually engage/disengage the power being provided from the folks pedaling.

I imagine it would be hard to get everyone to start and stop on command when needed.

Can someone with first-hand experience driving one of these things chime in on that aspect?

Do the patrons pedal?

It says 12 can pedal plus the captain, with two non pedalers.

If it crashes, will they all be cited for BUI?

I hear you Andy. I’ve sat through three green lights stuck behind a city bus. One of the thrills of biking is the speed factor. The Pedalounge is not here to wreck your ride. We want you to fly past us and wave. Then we want you relax with us and wave to those who fly by.

Correction: I hear you Andy. I’ve sat through three green lights stuck behind a city bus. One of the thrills of biking is the speed factor. The Pedalounge is not here to wreck your ride. We want you to fly past us and wave. Then we want you to relax with us and wave to those who fly by. (Hey, you try typing with with 12 sets of pedals)

Hey, what a great idea for weddings, birthdays or even a briss. Just be careful going over those speedbumps when the moyel gets ready to cut! We’ll have to contact Minnesota, and see how they managed….. Go pedalounge!!! Can’t wait to take a spin….how very wonderfully “Portland”. Thanks, John for continuing to keep us weird (and beered!)