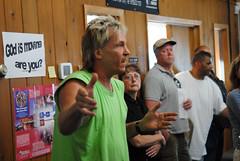 Making good on a promise, the City of Portland Bureau of Transportation (PBOT) will return to the Lents/Powellhurst-Gilbert neighborhood on May 11th to discuss the buffered bike lanes on SE Holgate Avenue.

The road was re-striped in August 2009 to include bicycle-only lanes with a buffered section to create separation from motor vehicle traffic. After a local TV station ran a sensational “Bike path to nowhere” story, some residents began to push back on the idea. 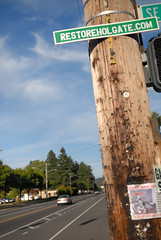 The project turned into a bona fide controversy when a citizen’s group called Restore Holgate emerged and organized opposition to the project. (And now there’s We Heart Holgate on the other side of the debate.)

Now, 10 months after the last meeting, PBOT will return to the neighborhood armed with data (which didn’t seem to persuade critics last time around).

PBOT’s traffic safety specialist Mark Lear has been the point person on this project. “Last time we were out talking to residents we made a commitment to come back and review the issues,” Lear told us this morning. At the meeting, PBOT plans to present a bevy of data on SE Holgate including crash history, vehicle speeds, vehicle volumes, an analysis of turning movements, and more.

“…we made a commitment to come back and review the issues.”
— Mark Lear, PBOT

In addition to the Holgate analysis, Lear says they’ll share information on other traffic safety improvements in the area. “One thing we heard was that people wanted us to tie this project into other improvements going on in the corridor… People were asking, ‘What’s this new bike lane serving?'”

Lear will share PBOT’s plans for an improved crossing of SE Holgate at 100th and he’ll explain upcoming Safe Routes to Schools projects that have been funded nearby.

The meeting is May 11th. Check the postcard PBOT sent out to the neighborhood below: 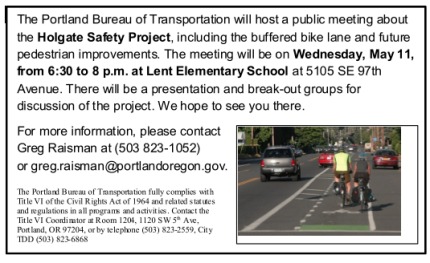 Lets not forget some of the responces to last years event in the Holgate area. This is just another chance to expose others to the joy of bicycling. People dont change overnite, it takes time.

I just moved from Holgate last weekend, but I’ll still try to make it to the meeting… drivers are still very hostile on Holgate, and even as a pedestrian it’s not safe to cross unless you’re at a light… it needs a lot more traffic calming features… curb extensions with some trees would be awesome…

I am seeing more bicyclists using Holgate bike lane recently. Percentage wise it’s huge. total numbers it’s not. it is nonetheless encouraging to see more people using it. use it – or lose it – which is what I try and do on my commute from 92nd/Foster to 109th/Division. I’ve had far more serious interactions with car drivers along Holgate west of 92nd where the street narrows down to just two lanes and on SE 92nd around Woodstock/Foster than I have along the buffered lane on Holgate.
IF residents along Holgate ‘want their street back’, I’d say given them their yards back and narrow Holgate between I-205 and SE 122nd down to just two lanes permanently.

If PBot were politically wise, they’d plant a redneckish actor in the crowd to loudly support their position. Maybe some kid in a body cast who was “just trying to get to school” on west holgate with no bike lanes but got ranned over. And a picture of speeding riced out civic or gun toting redneck as the culprit.

kinda goes with my username doesn’t it

Good luck at your meeting. Remember, if the citizens of Holgate don’t want it, we over here in “Starkwood/Gateway” would love to talk to you! We’ll bake cookies, provide hot cocoa and we promise not to show up just to yell at you without checking all the facts or ignoring your invites for months.

Sincerely,
William on behalf of the Starkwood Homeowners Association.

This citizen of Holgate LOVES the bike lanes and will be at the meeting!

Who is it serving?
Hmmmm, Citizens who choose to commute by bicycles? Is one person in a care more important than one person on a bicycle?

Correction:
…in a car….
I need to proof-read more!

People keep forgetting that you need bike lanes first (safe, usable ones) before people actually ride on them. I can make the same argument and say there are no cyclists on Terwilliger, so we don’t need a bike lane there. How many people ride on Hawthorne on a daily basis? Probably a lot, yet it’s paved for cars.

Those business owners whining about the drop in business, and blaming it on bike lanes are obviously looking for a cheap scape goat. I’m sure their customers are smart enough to park on a side street. God forbid that they have to WALK from their cars to the store.

Anyway, I hope Portland keeps building more buffered bike lanes and expanding public transit. Recession or not, this is common sense and the long-term benefits should be painfully obvious.

I live and own a home in the Lents/Foster area. Sadly our hood is riddled with narrow minded rednecks (see photo) who have no vision for the future or tolerance for others. These bike lanes will be vastly needed in the future when Dude (see photo) can’t afford to put gas in his camaro cause he got laid off at at plaid pantry. Yey haw!!