“This request is misguided… AASHTO should be a leading voice in shaping holistic and comprehensive transportation systems, not resisting them.”
— League of American Bicyclists

The League of American Bicyclists says that the American Association of State Highway and Transportation Officials (AASHTO), a powerful, Washington, D.C. based non-profit with broad influence on national transportation policy, is trying to water down proposed federal regulations that seek to increase the attention given to bicycling and walking in highway projects.

Streetsblog DC covered the issue on Tuesday and today, the League of American Bicyclists issued an advocacy alert calling AASHTO’s intentions “misguided” and urging members to contact their state departments of transportation. Here’s how the League lays out the issue: 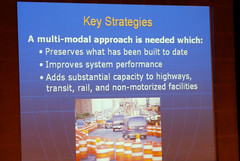 2008 AASHTO slide listing a
“multi-modal approach” as a key
strategy.

(AASHTO) released a letter (PDF) and supplemental document (PDF), which asked the US Department of Transportation to weaken their guidance on accommodating bicyclists and pedestrians. The supplemental document, submitted as part of a formal review of regulations, asks that the Federal Highway Administration (FHWA) withdraw their guidance on the meaning of “due consideration” of bicyclists and pedestrians to make it easier for states to ignore the needs of non-motorized travelers. AASHTO prefers the weaker “consider where appropriate” to allow states to avoid having to justify failure to accommodate bicycling and walking.

In short, the USDOT — perhaps in a bid to make good on their “end of favoring motorized transportation” rhetoric — wants to make it harder for states to ignore biking and walking infrastructure in new projects and AASHTO feels the regulation “presents an undue burden”. Here’s how AASHTO puts it (emphasis mine):

… FHWA guidance has embellished the law from “consider where appropriate” to a must include condition unless not doing so can be justified. Furthermore, it states that “there must be exceptional circumstances” for not providing such facilities. This regulation presents an undue burden on states to justify exceptional circumstances when not including provisions for bicyclists and pedestrians in a project.

This tone from AASHTO is surprising, considering their avowed support for bicycling in the past. They are actively working with the Adventure Cycling Association on the United States Bicycle Route System project and John Horsley, the Executive Director of AASHTO (who penned the letter linked to above), was a keynote speaker at the 2008 National Bike Summit.

In my report on Horsley’s address at the Summit, I wrote, “He wanted us to know that, after all these years, AASHTO gets the bike thing.” In addition, Horsley shared slides touting AASHTO’s support for bicycling. In his speech he said a “multi-modal approach” and adding non-motorized facilities should be one of AASHTO’s “key strategies” for the future, that increasing the amount of people how walk and bike should be part of the “new dynamics” to combat climate change, and that bicycling and walking should be “part of the solution” for “metropolitan mobility strategies.”

Given that speech, how does Horsley now justify his stance on this regulatory issue? We’ve contacted AASHTO to ask that question and will update this story when/if we hear back.

In the meantime, check out the League’s action page to tell your state DOT officials that we should strengthen federal transportation guidelines for biking and walking, not weaken them.

UPDATE, 3:30pm:Just noticed the WalkBikeJersey blog shared some choice words about AASHTO’s stance from Kit Keller, the Executive Director of the Association of Pedestrian and Bicycle Professionals:

“AASHTO officials seem to be oblivious to blossoming interest and innovation of local governments across the land that want walkable, bicycle-friendly communities. AASHTO’s recent pronouncement contributes to a growing sense of the irrelevance and irrationality of applying state mandates to local road conditions and needs. Hence the development of new tools like the NACTO Urban Bikeway Design Guide.”

I can’t see this having much affect on Sec LaHood.

Has Earl Blumenhauer been let loose on them yet?

Did the League of American Bicyclists’ blog have anything to say about it?

This is not good. And I’d wager that the flip is due to Republican posturing – this is another volley in the battle over the new Transportation Bill. Get ready to see more and similar pronouncements due to the influence of the pro-highway crowd.

In a day and age when this country is seriously considering slashing it’s already meager health and social safety nets, dumping on the poor and middle class and cutting even more the taxes of the rich, you can bet you’re last dollar that things like cycling and walking are going to get screwed in the national agenda. If there’s no benefit in it for the rich and powerful in this country, it’s probably gone.

It is important that Oregon cyclists let ODOT director Matthew Garrett know that we want him to push back on AASHTO’s proposal. ODOT, through Director Garrett, is a member of AASHTO. While I think it is unlikely that ODOT would agree with AASHTO’s proposal, the more comments ODOT gets from us the more likely they are to take a strong stand against it.

You can send your comments to Director Garrett either through the LAB action page that Jonathan linked above, or by phone or web form at ODOT’s comment page: egov.oregon.gov/ODOT/contact_us.shtml