Now just an on-street bike lane, the Staples
donation will make it easier for Metro to
complete the pathway.

Staples owns a distribution center that backs up against Marine Drive just east of the Portland-Gresham border (east of NE 185th, see map below). Marine Drive is a popular bicycling route and is part of the 40 Mile Loop. However, while much of Marine Drive is a multi-use path separated from high-speed motor vehicle traffic, there are still portions with on-street bike lanes where Metro would like to fill the gaps in non-motorized corridor. 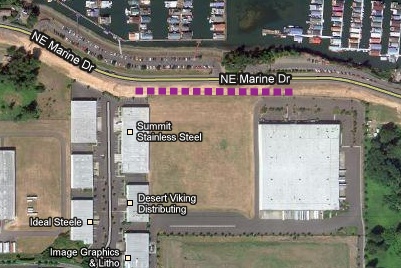 Staples has donated a 441 foot trail easement that Metro appraises at $7,800. Eventually, the Marine Drive trail will run along the back of their property. Metro must acquire all the easement rights and identify funding before construction can begin. Once fully completed, people will be able to ride on the Marine Drive trail along the Columbia River from North Portland to Troutdale without ever riding on the roadway.

Metro hopes more landowners step up to donate easements and trail rights. Their Natural Areas Program typically has to pay market value, but Metro reports that more than a dozen landowners like Staples have donated property.

Wow, that’s fantastic! Jonathan, any chance you could find us an address and person to whom we could email notes of thanks?

I agree! It would be great to know what other businesses have donated their easements, so we can thank them too!

Thanks for some great news!

Do you have more details on the exact location. There are two big gaps right now. Between 112th and 122nd, and around 180th to Blue Lake Rd.

And here’s the link to Google Maps.

I took a ride out this way yesterday for the first time (heading east of 205).

The areas with a separated trail were serene. The areas on the shoulder were not relaxing, especially with all the truck traffic. Its amazing what a difference 15 or 20 feet make.

If we’re dreaming, I’d love to see the trail widened and put next to the water for the whole stretch.

Way to go Staples! Best in Class!
“That Was Easy!”

Very cool! This isn’t just 441′ of ground, it’s a great example for the future.

All the advertising in the world can’t buy this kind of community good will. Thanks, Staples!

“That was easy” – good one! 🙂 I agree – I would love to have a specific e-mail address of someone at Staples that I can personally thank for this!

Off to buy paper and support Staples – way to go!!

That’s great. Let’s get this to snowball, eh? I’m tired of worrying about getting rear-ended by some errant trucker on a cell phone.

Just eminent domain the pricks who don’t want to help on this.

Thank you for the kind words. We are glad to help support such an important community asset. The person to thank is Staples’ Tom Colarusso – tom.colarusso@staples.com. Happy biking on happy trails to you all!

Although the voters have given Metro ove $200 million in parks and greenspace bonds, Meteo never pays fair market value for land unless the owner is a big Timber company or Railroad. Normal people simply gave their land confiscated through regulatory abuse. The bureaucrats will even refuse to graciously accept land that would be freely donated when they simply take it. The bicycle lobby is always their to cheer the taking of other people’s property.