A week may have already passed since the Oregon Active Transportation Summit down in Salem, but our news intern Patrick Croasdaile and I still have notes and photos to share. Of particular note was Patrick’s experience at the big “Lobby Day” on Wednesday.

Organized by the Bicycle Transportation Alliance, Lobby Day consisted of dozens of scheduled meetings between transportation advocates and state legislators. Patrick tagged along with a trio of advocates from the Community Cycling Center.

For a glimpse into the action, see his photos and notes below…

“For my own part, I was incredibly interested to see what legislators thought about walking and biking as solutions to reducing our health care costs and increasing the livability of our communities across the state.” 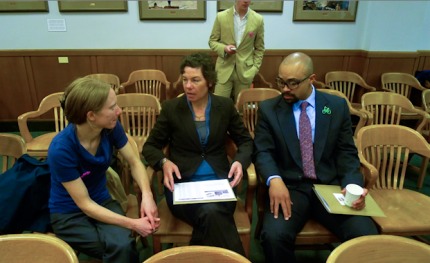 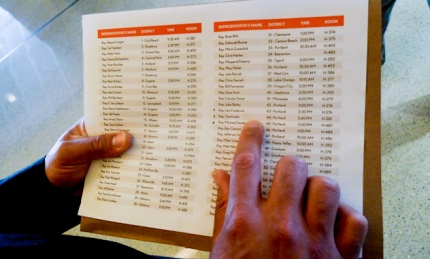 In the Capitol Building, you can never be too prepared. In this photo, Mychal Tetteh checks meeting details. 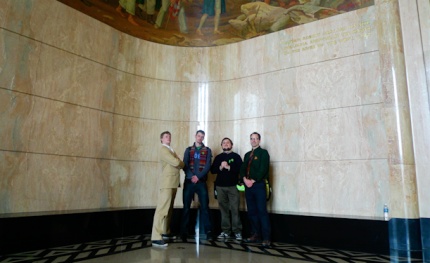 “I managed to catch up with Mychal, Laura, and Alison [from the CCC] after their first set of meetings. Laura was particularly impressed with how open to suggestions Chip Shields was. I got the impression from the rest of those assembled that advocates from Portland were making good headway with their representatives. Ted Bubhler was high-fiving anyone who had just talked to a representative for the first time. “Thank you for participating!” he chirped at each clap of hands.” 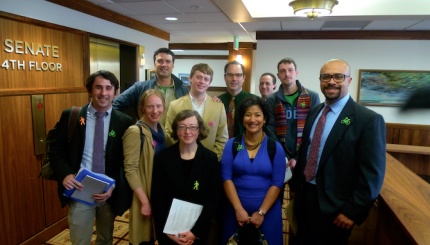 How could any legislator say no to such a fine and friendly looking group of people?! 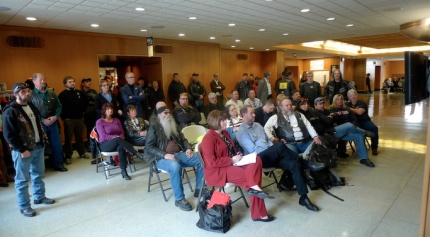 A mixed crowd. Motorcycling advocates and walking/biking advocates listen in on a hearing for a bill about the Columbia River Crossing (HJM 22). 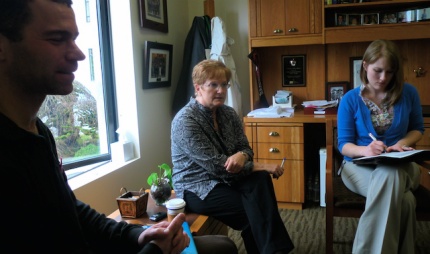 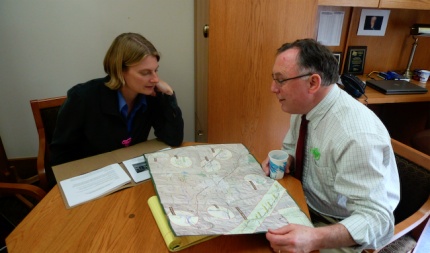 Jenna Stanke, an advocate from Southern Oregon, looks over a map of Jackson Country with House Democrat Peter Buckley (who also happens to be Co-Chair of the Ways and Means (Budget) Committee).

“Rep. Buckley is confident that the health care benefits of walking and biking will speak loud and clear in Salem, especially in light of the budget presented by Gov. Kitzhaber. According to Buckley, health care is a primary consideration in the governor’s budget. Kitzhaber understands that health care costs are likely to rise significantly in the near future, and as Buckley puts it, “if state legislators continue to put health care considerations by the wayside, our budget collapses.” The solution is raising awareness to the health care savings associated with active transportation increasing health equity. Mr. Buckley pointed to the success of Ashland Public School district’s implementation of a wellness program, which over the past year reduced employee health care costs by 18% through encouraging its faculty and staff to pursue more active lifestyles.” 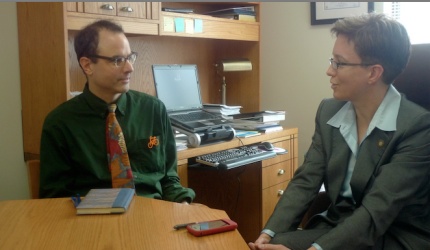 Advocate with Active Right of Way, Ted Buehler discusses the Columbia River Crossing project with North Portland House Rep. Tina Kotek. Kotek is a vocal supporter of the project, while Buehler is opposed to it.

“The conversation diverged from mere pleasantries when advocates began discussing Ms. Kotek’s support for the Columbia River Crossing. Buehler and Kotek were in complete disagreement regarding the definition of the bridge’s lane capacity… in conversations after the meeting, I was informed that a large number of Ms. Kotek’s constituents disagree with her handling of the issue. But Rep. Kotek is staunch in her belief that the CRC will generate significant economic activity in light of the projects hefty price tag… Kotek wasn’t touching on the fact that there is still a considerable amount of start-up capital to be generated by Oregon taxpayers that is seemingly disproportionate to the intended user of the CRC.” 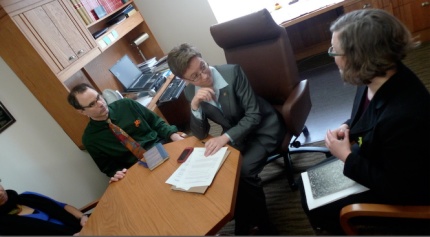 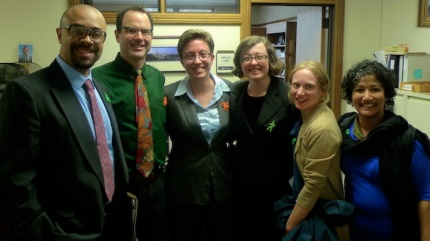 Despite stark differences of opinion on the CRC project, you’ll notice that everyone is still smiles after the meetings. 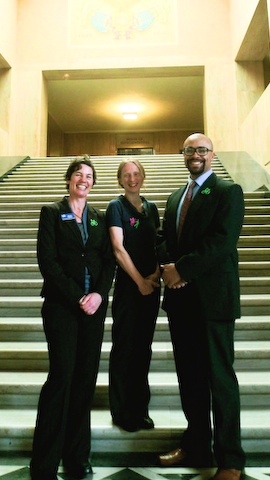 A long day’s work behind them, the crew from the Community Cycling
Center pauses for a portrait.

“By the day’s end, I had visited with four representatives from around the state (Portland, West Linn, Ashland, and Woodburn), and was left with a positive outlook on how our Oregon’s legislature responds to the active transportation lobby.”

Thanks for sharing your experience with us Patrick, and thanks to all the advocates who participated in the lobbying day.

— Browse more of our coverage from the 2011 Oregon Active Transportation Summit here.

Huge thanks to those who took the extra day to speak with Oregon’s legislators about biking and walking needs. It was an honor to be with you all, and fun to boot!

Thanks for the photos and coverage, Patrick. And we enjoyed your presence at the meetings, too.

The photos can show folks back at home what it’s like to sit face to face with your elected officials and discuss issues of importance to you. I’d encourage everyone with an interest in shaping their bicycle’s world to try and attend next year.

And a big thanks to the BTA, WPC, OBRA, and other groups that organized the summit.

74 meetings with legislators in one day… hats off to our team for rolling up their sleeves and working so hard!

Tina Kotek: Boo! Boo! She represents No. Portland which would really suffer from more air pollution. She must have her head up her bu**. Or maybe she’s just from Texas.