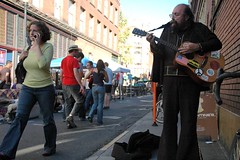 Director of PBOT Tom Miller told us today that he supports making a block of SW Ankeny Street carfree.

Miller said he met with business owner Dustin Knox yesterday and the two, “sketched out a potential pathway to success.” Knox owns a bar on the stretch of Ankeny between SW 2nd and 3rd and he was featured in a story in Willamette Week on Wednesday. In that article, Knox said he and other business owners wanted more space for tables and chairs for their customers, but that people on the street are too cramped by cars. (This stretch of Ankeny is very narrow (therein lies its charm) and has a parking lane and one through lane.)

Before making any changes, Miller says PBOT will do an evaluation of the street to determine the current traffic situation. He also made it clear to Knox that any change would have to come at no loss in revenue to the City. There are currently seven metered parking stalls on the block. Miller told us he wants to ensure the Bureau is compensated for any losses. “We’re not in the business of giving away a valuable resource… But we are in the business of helping businesses succeed.”

Miller has advised Knox to draft a letter of support for the idea and get it signed by all the business owners on the street.

There are still several details to work out, but Miller said “It’s a superb idea” and he’s “cautiously optimistic” PBOT can get it done. “My hope is it can be done by summer.”

The type of change that occurs on Ankeny remains to be seen. Options include just making it carfree during the summer season, or even just closing it to motor vehicle traffic during the evenings. “We could do something as simple as putting up bollards on either end of the block and allow restaurants to put up tables in the street and go about their business.”

For Miller, who doesn’t officially take over his new role as PBOT Director until May 1st, this isn’t just about responding to business owners, this is about managing the right-of-way with more than just cars in mind. “It’s real estate,” he told me today, “that can be managed in a variety of ways.”

I asked him to share more about his perspective on that management role:

“PBOT is the largest landowner in the city. Our core responsibility is to move people and goods, but that should be understood comprehensively… We should be held to meeting our mission in a variety of ways. If this is an opportunity to get more return on community investment, than I like it. It’s about maximizing the value of the community-held resource.”

You would think that with Portland having blocks half the size of a normal city, meaning twice the road space per block, that it would be easier to close streets down. Imagine every other street in downtown being a ped/bike path with space for plants, trees, benches, art, etc.

Close every other block, double the parking rates. Still cheap to park 🙂

IMO, PBOT is putting up too many hoops to jump through; they should just DIY this thing, like what finally had to happen to make Last Thursday on Alberta car-free.

yeah, I had to physically push two cars into the street to close alberta down to traffic. either way, we got it done.

I’m in full support of a car-free Ankeny! How exciting! That stretch is so short and so narrow already I don’t see the appeal of driving on it.

I’m disappointed to hear Miller talking about metered parking as a “valuable resource”. I know it’s a revenue source that the city uses, but making parking scarcer is going to be a necessary part of the transition to focusing on human rather than motor vehicle mobility, so I hope they’re thinking ahead farther than that quote sounds. The idea that the businesses should compensate the city for lost parking revenue due to a people-friendly street conversion seems pretty absurd to me.

The “valuable resource” he was referring to is the right-of-way, not the parking stalls. Sorry if that wasn’t clear.

either way, it seems like a stretch for that short little street…

According to maus’s above story, there’s only 7 parking spaces on the street. Miller does an admirable job of succinctly detailing the city’s business philosophy with regards to its real estate. If he didn’t consider the significance of parking revenue for that street that could be affected by excluding the parking from it, no doubt, someone would make a big deal about lost revenue.

This section of Ankeny has been a convenient way for east-bound on Burnside drivers needing to cross under the bridge on 2nd. It’ll still be possible with closure of the street, but will involve another 4-5 blocks travel through lights and intersections. Not a real big deal.

So I suppose, considering that businesses on the street have said they want to use the street for alfresco dining and drinking, closing it off to vehicles, the closure will extend to bikes too? Or would this just be street closed to motor vehicles? I noticed the story saying that access for emergency vehicles must be maintained, regardless. So maybe bikes will be permitted to use that emergency vehicle access for regular travel purposes.

I am not a lawyer, but Mr. Miller’s statement that PBOT is a “landowner” doesn’t sound correct to me. I think a right-of-way is not land “owned” by any agency, but is rather a common that belongs to all. I think PBOT is the agency that manages what goes on in public right-of-ways within the City. Can anyone verify this?

Hey! Also… What about a carfree southEAST Ankeny?! 😉

PBOT’s requests here are reasonable and what one might expect from an agency that depends on parking as one of its revenue sources. If the City requires compensation for lost parking meter revenues, I suspect that the increased business these venues would see as a result of the expanded area to accommodate customers would more than cover that cost. (And if they were car-free in the evenings after 7pm when parking meters expire, they’d avoid incurring that cost all together).

Great to hear what the Director had to say about re-evaluating the best use of our public right-of-way. In the pedestrian-intensive urban core of our downtown, storage for private property (cars) is not necessarily the optimal use of space. It seems that both PBOT and these private businesses (both of whom directly benefit from the space as parking) recognize the potential for the space to provide a greater value.

“We’re not in the business of giving away a valuable resource” I’m glad to hear he meant the right of way because if he was referring to the meters because I would have to call b.s. on that. They only recently started charging at any time of day for parking on sundays (they are still free til 1pm) and metered spaces are clearly priced far below market value on weekdays. The city consistently gives away a valuable resource with respect to their parking policy.

I hope Portland can find a way to make large sections car-free. It can be done. Where there is will there is way.

just raise 5 cents per hour on city parking elsewhere. it will cover more than loss of parking revenue on the little street.

SW Ankeny is a street, not a boulevard. It would be ironic if it were a boulevard, since anything called a boulevard tends to be a broad thoroughfare.

Now wait a second. Is Tom being misquoted, or is PBOT saying that with a street closure, the businesses might be allowed to place tables and chairs in the street ?!?
‘Carfree’ and ‘commercialization’ are very different things.
I can see modifying code for cafe tables to fully occupy the sidewalk, but turning over the public space [street] for business-only use doesn’t seem right.
Such a space should be left to the public uses that will occur naturally, including congregating, walking and cycling through.

My two sense is that outdoor cafe seating is a pretty sure way to activate a space. And there are many a pedestrian street that have become dead after closing auto traffic to them. Obviously cafe seating areas should respect ped/bike movement needs but I don’t think one is exclusive of the other, especially if it occupied the space that had been previously been paid parking.

I have to agree that this is my biggest concern as well.

Re-purposing the street for a different type of public use seems much more fair and acceptable to me than giving it over for the adjacent businesses’ increased opportunity to profit from their use of a public space. I find myself wondering if the liability for what happens in the street would also be transferred to the business who would be given its use for their gain? Then there’s the sticky situation of whether the OLCC would be granting an extension of permitted consumption area for the relevant licensees on an ongoing basis into publicly owned space. If the sidewalk on that block of SW Ankeny is too small for sidewalk seating to co-exist with pedestrian (ADA compliant) access, does changing the street to a pedestrian mall automatically grant use of the sidewalk to a business?

I would like to see this street made car-free. I also see a lot of hurdles that may have been avoided had this not been spearheaded in the interest of expanding those businesses’ service areas. Why wouldn’t some food carts be allowed to set up shop in the street as well?

Make it car-free and all public please. It seems the only fair way to me.

If this is what has to be done (close down a thoroughfare) to have access to a cultural icon (Elvis of course) then it must be done. Rhetoric can not prevail in the face of this logic, creativity, humanity even. This is NOT sarcasm.

Bill Stites, Sarah Figliozzi, twistyaction, you may or may not have read in maus’s story, the following:

That’s written as maus’s conclusion, rather than a quote from Miller or whoever with the city. Unless maus somehow got it wrong, I would interpret that to mean that for the purpose of enabling emergency vehicles unimpeded travel on the street, a minimum street width of 8′-12′ would have to be kept clear of cafe tables and whatnot.

Even with street parking gone, that’s not going to leave room for a lot of tables out front of the businesses. If the street is made available to pedestrian use, the businesses could probably use the sidewalks for tables. Those sidewalks are only wide enough for one small table. Businesses using the sidewalks for that purpose shouldn’t be much of a problem for pedestrians or ADA if the street is available to them by virtue of it being free of cars, and if it were to have a maximum speed of say…7mph for bikes is posted.

The statement about “no loss in revenue” seems like total BS. PBOT works for us (the taxpayers) — not the other way around. If we want to reduce paid parking and therefore reduce PBOT’s funding — we do it. There is no golden rule that says changes to our transportation system must be revenue-neutral for PBOT.