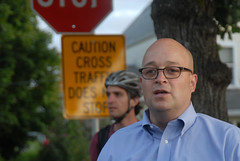 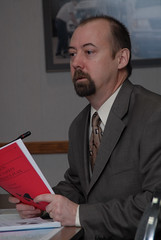 The new Safety Education Advisory Committee will meet quarterly and TriMet says the purpose of the group is to,

“help strengthen community presence and promotion of safety programs and services by bringing together community representatives who have an active interest and stake in helping make our streets safe, to share ideas and create leverage for effective strategies to raise awareness and promote safe behavior for pedestrians, bicyclists and motor vehicles around buses and trains.” 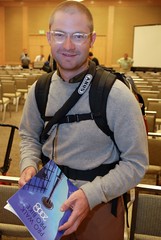 Among the 14 members of the committee are several names regular BikePortland readers will be familiar with.

Carl Larson is a Walk and Bike Ambassador with the Bicycle Transportation Alliance (BTA) and has recently become part of the creative team behind a series of video PSAs about bike lights. Stephanie Routh is the executive director of the non-profit walking advocacy group, the Willamette Pedestrian Coalition. Her group developed the Getting Around on Foot Action Plan that was released last year. 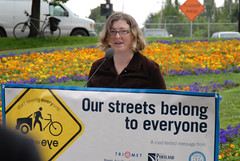 Other members of the committee include; Mark Lear, Traffic Safety Manager for the City of Portland Bureau of Transportation and Troy Costales, Administrator of ODOT’s Traffic Safety Division. Lear is frequently engaged on bike safety issues and projects and you might remember Costales as the man who coined the phrase “aggressive pedestrian” in a recent press release about a rise in walking fatalities.

You can see a full list of committee members here. The committee will meet quarterly with their first meeting slated for March 15th.

Sounds like a reasonably balanced committee if the 4 are representative of the 14. Hopefully, they’ll be able to bring issues to Trimet’s attention, and hopefully Trimet will heed their advice. The challenge of any advisory body is in getting the organization they counsel to accept and implement their findings.