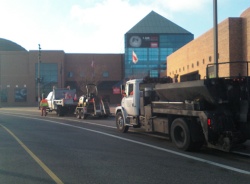 City crews at the lip a few hours ago.
(Photos: Mark Ginsberg)

Just got some great news: PBOT crews have taken action on the notorious “OMSI lip” by paving over a portion of the small curb that has claimed numerous victims over the years.

The lip is a small curb up to a loading zone pull-out adjacent to the bike lane in front of the Oregon Museum of Science and Industry on SE Water Ave. It was difficult to discern from atop a bicycle and the curb was severe enough to grab a wheel. Last week we reported about reader Cynthia Chilton who suffered a broken clavicle after hitting the lip. Chilton was just the latest victim in what we came to find out was a very common hot spot for bike crashes.

With a current detour in place that routes bicycle traffic off the Eastbank Esplanade and onto SE Water, concerns over this dangerous curb have gained added urgency.

This morning, bike lawyer Mark Ginsberg rode by and noticed crews pouring asphalt on a portion of the lip. He gave us a call from the scene and offered this report: “They put an approximately 4-foot long asphalt transition to smooth the height difference between the asphalt roadway and the concrete parking pad.”

Below are two more photos provided by Ginsberg: 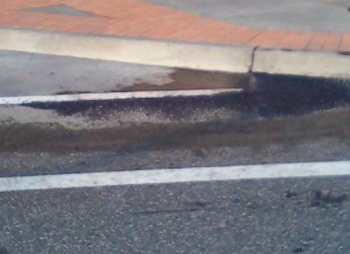 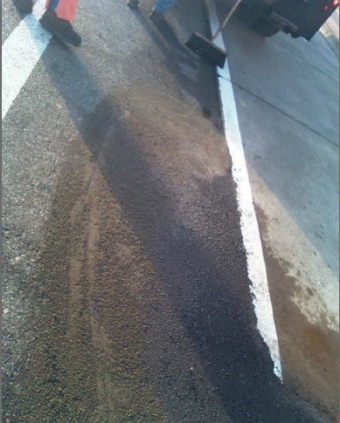 Ginsberg noted that there are two parking pads that have the dangerous lip and crews fixed the southern of the two:

We’ve asked PBOT for more information and will update this story when we get it.

that has claimed numerous victims over the years.

I rode through this area yesterday (SE Clay is also a wreck with construction at MLK and not very safe for bikes right now). Glad to see the City act so quickly on a hazard like this. It might be something I as a regular rider can avoid, but not easy for a child or person unfamiliar with the area who’s been detoured off the Springwater Trail.

Frankly, that whole detour is a little dicey for family riding, though. Not sure I’d take a child on that narrow road with no bike lanes frequented by large trucks…

I have to wonder if this is going to be the permanent fix (asphalt ramp). Previous experience with asphalt tells me that vehicles driving up the lip will compress it and weather will quickly erode it. Granted I’m no expert in all things asphalt.

It’s great they fixed it, but this safety obsession is a bit much. The more we codify our environment, the more we dull our own senses.

fixing a saefty hazard is a bit too much??

I can’t… I mean, I don’t… You have got to be kidding me! You want our streets to be obstacle courses so we can stay sharp?

Perhaps it’s the angle of the photo, but I can’t see what the danger was here. There are thousands of holes and cracks in our streets that would topple any cyclist. Seems strange that this one got so much attention.

One of the problems was that the edge happened to coincide with the striping, effectively camouflaging the edge. I think the city responded so quickly because it was a hazard that was designed into the roadway and therefore probably posed a greater financial risk than a pothole or something that would fall under wear and tear.

Yeah, doesn’t look like much from the angle above, but you’re right, the striping hides it.

One less hazard. Thanks.

How will an asphalt ramp fit in between the curb and the drainage grate that led to the crash in the first article? (photo)

If only they were as responsive on the street car tracks issue. Probably can’t get away with just throwing asphalt at that one.

“…”I chatted with them and they told me they were told to only put in the short section as a test, …” Mark Ginsberg

A test? I wonder how, through this test, the city will proceed to determine if this asphalt infill approach to mitigating the ‘lip’ is effective and satisfactory.

On 2nd look at the photos, it seems that they just put asphalt on the surface with some binder. Not quite a permanent fix – they would have to trench and keyhole in a section for a permanent fix.

Lets see how long it lasts.

Keep this in mind when you comment about problems in our network. Leave a comment here, but make sure you ask the city/state/whomever to make it right too.

About 5 years ago I went down HARD on this lip and was sore for a few days afterwards. I am an experienced and safety conscious rider and very rarely go down. I have ridden extensively in this country and throughout Europe and this is one of the worst booby traps I have ever come across. I notified PDOT about it, letting them know it was a serious injury / lawsuit waiting to happen. They called me back and, rather arrogantly, stated that it was not a problem. I disagreed but they refused to do anything about it. It is too bad that it took someone getting seriously hurt for “The City That Works” to actually do something about it. I wish the victim of the most recent incident well.

Just rode by about half an hour ago. The ‘asphalt ramp’ is about three feet long at the northern end of the 2nd ‘turn out’ (if that is the correct term) heading south from Clay Street. There a total of three turn outs in the immediate area of OMSI that have this issue. I estimate less than 5% coverage of the total length of the turn outs combined. About ten feet further south on the 2nd turn out there is a storm grate that butts up against the ‘lip’ which would be hard (if not impossible) to fix with the asphalt option. So even if they covered the entire length of the turn out that would still be danger point.

Not much of a solution so far………

maybe they could have ground down the lip instead?

Seems to me the solution would be to grind the lip, much like you would a heaved section of sidewalk to do the transition rather than pave the thing over.

In all reality, I think that lip is the least of the problems with that route. I think that detour needs to be re-thought out. I was almost hit by a semi yesterday on the section of the detour with no bike lane.

Is this really the best solution for rerouting the bike trail? As it is now, I would not pull my daughter in a trailer on that detour. I think I’d opt to just walk my bike past OMSI since (for whatever reason) walking is still allowed.

That area is frequented by large trucks coming and going for the big dig and the McLaughlin construction projects. It seems like an incident waiting to happen. The driver of the truck that almost hit me was talking on his cell phone and not paying attention to the dangerous stretch of street on which he was guiding his (20 ton?) rig.

sure hope you called that one in, seeing as how you were still conscious and live and all….. give me the info, *I’ll* call it in…..

Is anybody else concerned with pavement quality on the non-detour route along the bike path between OMSI and Hawthorne Br – the “fenced in” section, which is black asphalt with no lighting and very poor asphault condition? This section needs to be re-surfaced. Not to mention the pinch-point at the N. end of OMSI building where cyclists have to veer around the lamp post – kind of a blind spot with shrubs and pedestrians. They need to widen it and move lamp post, or just permanently detour cyclists off the sidewalk/bikepath on the river side of OMSI – and move us over to Water Ave with bikelane additions.

BURR
Reply to  bald one

I’ve raised this question before, what appears to be happening is that the temporary asphalt continues to deteriorate while the city waits for that property to ‘redevelop’, so that the developer pays for the improvements. Once upon a time the city had plans for a public plaza in that area…

What I don’t understand is why that first section between the Hawthorne bridge and the OMSI gate wasn’t improved when the Holman Building @ SE Clay and Water was renovated, that included improvements all the way to the river, including a new dock, but not a new path. WTF?

I rode past this today after the test patch. Great response. I was a bit worried that the patch might give way, as fresh asphalt often does.

We just had a mishap there this past weekend on a group ride. Very glad to see it being addressed!

They need to grind down the entire length of that lip. I ride that route home every day and while I know that half-inch rise is there, it’s caught me more than once as I try to scramble to get out of the bike lane because a giant truck is passing me and using the bike lane as a buffer. The way it is now, it’s like hitting a track at an angle, unless you hit it straight on, it can grab your wheel and pull you down. The current “fix” does absolutely nothing to address the problem.

Nice (not necessary, but nice) that they’ve fixed this nonstandard treatment, but I agree with others above that the detour itself sucks. Couldn’t they at least paint some sharrows on it?