Earlier this month, we shared the news about River City Bicycles’ new outlet store in Southeast Portland. The shop opened for business this weekend and I stopped by for a quick look inside on Sunday.

“First sale was to a guy on his way to Wal-Mart to get a mountain bike for his wife. Instead, she got a nice Gary Fisher.”
— shop owner David Guettler

River City owner David Guettler caught my attention via Facebook when he shared about the first bike sold at the store. It happened just after opening on Saturday and went, “to a guy who was on his way to Wal-Mart to get a mountain bike for his wife. Instead,” said Guettler, “she got a nice Gary Fisher.” 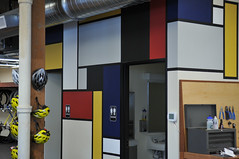 That’s the basic idea behind this new outlet store: Nice new bikes at low prices. For a store like River City — known for its racing heritage and jaw-dropping selection of high-end bikes and parts — an outlet store is an interesting direction. But for Guettler, it’s all about giving people more options to find the right bike at a good price.

Guettler also notes that his new outlet store isn’t beholden to any one specific brand. If you’re new to how the bike industry works, brands and suppliers — especially large ones — can have a big influence over what bike shops sell. Wary of that influence, Guettler is excited that his outlet store is not brand specific. He shared more with me about that on Sunday:

“I don’t think it is healthy for small independent businesses to become beholden to their corporate suppliers. They, like any business, will make decisions that are in their own interest, not ours or our customers.”

The flexibility to sell whatever he wants, combined with decades worth of relationships in the bike industry, means you never know what you’ll find at the new shop. 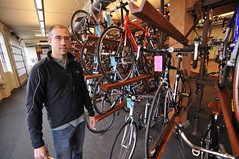 On Sunday, River City Bicycles Outlet Store employee Brian Zeck showed me a few of the bikes they’ve got in stock right now. From a brand called “Virtue,” they’ve got a nice-looking six-speed for just $370 and a singlespeed,coaster-brake model for $270. Another brand you won’t see at the other River City is GT. But at the outlet, they’ve got a big mix of GT models, including a “Traffic 2.0” urban bike. It’s a nice mix of parts and a solid frame for just $550 (retail is $730). 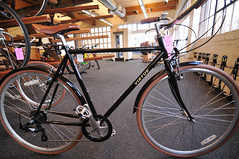 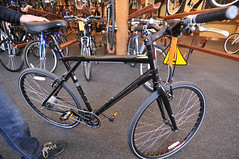 Zeck also pointed out a full-carbon Bianchi road bike that retails for $3,000 but they’re selling for just $1,800. “There’s only one of them at that price, but someone is going to get one hell of a deal and be very happy.”

Given the nature of how they purchase bikes (a mix of supplier closeouts, bulk purchases, and overstock from River City’s other store), Zeck says the inventory will be constantly changing.

With its corner location right of Belmont at SE 6th, the shop is sure to get a lot of traffic. Will it spur other shops to consider outlet stores? Will it spur the demand for more low-cost brands in Portland? It will be interesting to see how it evolves and how its presence alters the local bike shop ecosystem.

— View more photos in the gallery.

I did tend to think that the original RCB didn’t have much of a brand selection after the high-end bikes (> $3K) but I’ll be curious to stop by their outlet!

didn’t mondrian despise the working class? am i thinking of someone else?

My wife needs a new bike. I’ll certainly check this place out.

On another note, I really despise the over use of Mondrian artwork. It seems like a common fallback for the non-creative and uninspired.

Are you sure it’s not an homage to the Partridge Family?

Has no one in this thread ever heard of Greg Lemond, or know anything about him and the teams he rode with?

looking forward to seeing your redesign of the store’s decore

@sabernar: If you don’t like Mondrian, you will be reassured by the fact that the Mondrian painting is on the bathroom walls.

As for cycling artwork, the cubist painting “At the Cycle Race Track”, (Au Vélodrome) by Jean Metzinger is my favorite – http://www.heritage-images.com/Preview/PreviewPage.aspx?id=1621546&licenseType=RM&from=search&back=1621546

I like the artwork.
Do they sell any good used bikes also?

“Cylists vs. dead artists” is this a new controversy? Oregonlive better act quick.

That GT Traffic will make a nice commuter for someone.

Sorry, can’t think of anything snarky to say about art right now 😉

“On another note, I really despise the over use of Mondrian artwork. It seems like a common fallback for the non-creative and uninspired”. My father always said if you don’t have anything good to say don’t say anything at all. (He was so non-creative, but very inspiring!). Someone worked real hard at the artwork/ painting, and I am sure it represents a homage to BICYCLE RACING!!!

Good luck with the shop Dave, I am sure it will do great. I will be sure to visit the next time I am in town!