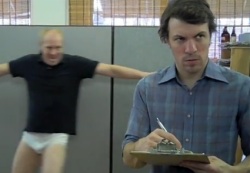 Shot from BTA’s new video.
– Watch it below –

For most of us, there’s only one night a year where we’d even think about hopping on our bike without our pants on. The BTA has put out a new video that uses this idea to encourage the use of bike lights.

They unveiled a hilarious new video the other day titled, Strategies for Getting Around Without Bike Lights (or Pants). It features Portland Mercury editor Wm. Steven Humphrey trying to get through his day without pants on — which is just as silly as trying to get around town in dark without lights on your bike.

Watch the video below and let us know what you think…

Strategies for Getting Around Without Bike Lights (or Pants) from BICYCLE TRANSPORTATION ALLIANCE on Vimeo.

Word on the street is that this is just one of a series of similar PSA videos about bike lights the BTA is working on. Stay tuned for more.

This video is awesome. Day or night, I always bike knowing that cars, trucks and trimet buses can’t see me. Look at the number of houses and poles that get smashed by cars lately!!.

OMG…I’ve got the advantage, I can move out of the way with ninja like skills. An innocent home can not move, and should be wearing a helmet as Greenlick would say.

The link is good for me…

The video embed feature seems to work slowly. You have to click play a few times, and wait about 10 seconds. It’s a bug in wordpress or vimeo.

Now whenever I pass a ninja biker I yell “Pants?!”

was carless
Reply to  el timito

I always yell “Ninja!”
People look at me funny.

Hilarious and poignant. I love going out at night on my bike (and as a pedestrian) and I never fail to see at least one “ninja” out there, often several if I am on a major bike corridor. I hope this helps get the message out, although I fear it’ll really only get to those of us on websites like this… conscientious bicyclists who probably already have some lights.

Some of the “arguments” made in this video do have some validity though (I always try to have my lights with me, but once in a while I lose one, or don’t think I’ll be out as late as I am (got nailed on that one after daylight savings)).

Riding around people with lights, on less traveled streets, riding extra defensively, sidewalks even (where there is no pedestrian traffic), are all ways you can be a at least a little safer when you lose or forget your lights.

I’m not advocating not using lights, but sometimes things happen and people are not lit and these are ways they can still get home at least a little safer.

Exactly, davemess. We made this video as people who are 99% reliable at remembering our lights but have definitely been caught, on occasion, with our pants down (on the light front).

If the “arguments”/tactics/strategies sound familiar, it’s because they’re the things that many of us do in order to minimize the risk of riding without lights.

Our hope with this video is to correlate a common error (forgetting your lights) with an error that most of us would find far more unthinkable (forgetting your clothes). We’d like to see bike light use, like clothing use, a cultural norm — second nature.

Funny thing is, unless it’s very cold outside, it’s probably more dangerous to forget your bike lights than your pants. With its very safe track record, the World Naked Bike Ride, as Jonathan mentioned, is living, jiggling, screaming, blinking proof of this theory.

The easiest way to contend with that problem is to have more than one light.

I was a deliberate ninja when I first moved here, years ago. In Chicago, it always made sense to me- I was much more wary of being seen than not being seen, more keenly aware of the threat of intentional violence than inadvertant collision. It took me a while to get used to the idea of plastering blinking lights on myself and announcing my presence to the whole damn neighborhood every time I rounded a corner.

I used to avoid wearing condoms for that exact same reason. I was much more worried about catching something rather than spreading it. You see when I bare backed it, I was much more careful of who I slept with–being keenly aware of those guys and gals that “intentionally” spread disease (compared to those who “inadvertently” do it). It took me awhile to get used to wearing a raincoat and “announcing” to the whole neighborhood that there might be something unsafe about riding free style.

Safety equipment (of all kinds) is for what is unplanned and unexpected.

I think the BTA would loose its “family friendly” designation if it acted out that parody. Maybe next year’s hump fest can take it up?

Good point through. No one plans on getting hit and deliberately reducing your visibility while biking is always a bad idea.

I think the “intentional violence” snapbrim mentions is not from drivers. Ne’er-do-wells hanging out on the street might see a blinky-festooned bike nerd as an easy target for mugging.

I went to kindergarten one day, having forgotten to takr my pajama bottoms off before putting my pants on. Totally embarassed, though its doubtful any of my peers had a clue. But I was in love with Ms. Franke, the teacher!

Anyway as far as lights go, it really trips me out when someone is coming at me on a dark and foggy Springwater trail, as a bike, stroller, dog or whatever, with a red blinky on the *front*. Gets me all confused!

I went to kindergarten one day in my underwear…then I woke up.

The first few months I lived in Portland, I biked without lights. Honestly, it just never occurred to me I needed them. I think I might have thought that since bike lights did little to illuminate the roadway for me, they were pointless.

It never occurred to me that the reason I should have lights is not so’s I can see others, but so’s others can see me! (Yes, I’m a moron).

and not those 1-led 1/2 candlepower lights neither. are those like jorts?

Main headlight – on blinking in the daytime, on solid after dark. A small white front blinkie, only to be used when the headlight is on solid. Enormous wildly patterned taillight on my rack on whenever I’m on the road, blinking taillight on my helmet on after dark. Clip-on visor light after dark so I can actually see street signs and show drivers that I’m staring right at them, one sideways-directed spoke light so I don’t get nailed at a cross street.

I got rammed by a truck while in a car and it almost killed me. I really don’t want to be hit when I’m not wearing an exoskeleton.

In the northwest, riding without pants would be very visible at night, pasty white legs and all.

Will humor succeed where threats of tickets and fatal accidents failed?

Cool points to who ever came up with the idea.

I carry spare button batteries in my kit, for my Spok lights.

I used to carry a cheapo back-up light in case my main light failed. Now I just use them both. Main steady, backup blinking for night time, both blinking for day time.

I don’t have a ton of rear lights (one PB Superflash), but I have giant reflective triangles on both of my panniers (although they are white triangles). I’m less worried about lights on the rear, since I think the back of a bike is where reflectors are the most effective.

One thing I do worry about is that pesky side visibility. Seems like some kind of spoke lights would be the best (reelights?) anybody have any scientific data on what constitutes the best solution for side-viz? Down-Low Glow (don’t know if I would want to go that far for multiple bikes)?

I always buy tires with reflective sidewalls. It’s amazing how well the stand out when I see them on other bikes (even when lit only by my front light).

Sorry John I couldn’t help it.

One of the ways I cope with dead batteries is that my three lights (and my mp3 player) use the same kind of battery. So if one battery dies I can move batteries around and stay visible.