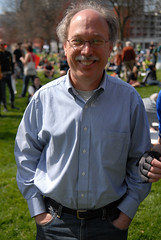 “We need a new set of measures that emphasize accessibility and choice, rather than simply automobile speed.”

The chief measurement in the UMR is known as Travel Time Index (TTI), the ratio of average peak hour travel times to average free flow travel times. Here’s an example from the report: A trip that takes 20 minutes in free flow conditions is estimated to require, on average, 25 minutes during peak travel times, giving it a TTI score of 1.25 (the higher the score the worse travel conditions are thought to be).

Cortright argues that we should be focused on total travel times (not just peak and free-flow) in order to set public policy on urban transportation problems. If more planners did that, Cortright says, there would be a larger priority put on improving land-use patterns, access to transit, and creating neighborhoods that are good for walking and biking.

Reached today, Cortright said that the UMR has been used for decades, “to beat the drum about the horrors of urban traffic congestion, and argue for more highway capacity… And it’s structured in a way that rewards sprawl and penalizes compact development.” Cortright calls for a new set of measures that, “Emphasize accessibility and choice, rather than simply automobile speed.”

According to Cortright, the key is to focus on policies that encourage shorter trips, which reduce peak period travel times (he lists a five-point plan for a new system in the report, which you can download here). This issue, he says, also strikes at the heart of the role cities play in bringing people together. From the report (emphasis mine):

“The essential economic and social purpose of cities is bringing people together, taking advantage of opportunities for interaction and agglomeration economies. Cities perform this function in two principal ways, by providing accessibility (putting people close to one another and to common destinations), and through mobility, the ability to move easily from one point to another. National discussions of how to make cities work better have tended to focus on making it easier for people to move, which has had the paradoxical effect of leading cities to be less dense. And the measures we use to describe how well city transportation systems work have reflected this bias toward mobility. In that sense, the emphasis on mobility measures has driven us apart. Putting more emphasis on accessibility can bring us closer together.”

The Driven Apart report was commissioned by CEOs for Cities and supported by the Rockefeller Foundation. Download the executive summary and learn more at the CEOs for Cities website.

Joe Cortright rocks. The graphic is priceless, and told me one thing that was painfully obvious during the 20 years I lived in Detroit – that Detroit tops the list for urban congestion. Part of that might be due to the poor transit service. part might be due to the distance to employers – it’s not unheard of to live 45-65 miles from where you work, and with the highest unemployment in the nation, you take the jobs where they are.

Just heard this report referenced on ABC News radio. Sweet! Maybe it will even get some mainstream T.V. and print media attention.

PBOT Pete to world: “Well, “flawed” metrics are the norm among reasonable people, planners, and engineers.”

Too bad Portland dosen’t have someone like Joe instead of the unqualified bunch we have….

You can’t slam Portland planners and engineers much based on this report. Joe specifically cites Portland and similar cities as good examples:

“The key is that some metropolitan areas such as Chicago, Portland and Sacramento have land use patterns and transportation systems that enable their residents to take shorter trips and minimize the burden of peak hour travel. If every one of the top 50 metros followed suit with Chicago and other higher performing cities, their residents would drive about 40 billion fewer miles per year and use two billion fewer gallons of fuel, for a cost savings of $31 billion annually.”

#3 Paul Tay – The TTI index is based on the data that is available, which is the historic way it was collected. ODOT and all other states and metro areas collect data and TTI uses it as it is presented.

One could argue that congestion is a good indication that makes bicycle travel competitive with auto travel (if you’re comparing travel times). Many DOTs don’t like being on the list.

The researchers at TTI recognize it is flawed and doesn’t tell a complete story. It started out as a study and has grown into something that always gets national attention.

It seems like a sensible strategy for designing more livable communities, reducing greenhouse gases, reining in sprawl, encouraging active transportation, and declaring freedom from car-dependency always comes back to a simple two-word mantra: shorter trips. Good to see someone like Joe Cortright advocating this approach.

Boo for it taking 25 years before one of the many thousands of people who work with this metric decided to ask “why?”.

World Oil Prices plummetted that year. I can’t imagine that a Texas agency would have any agenda about increasing vmt and oil use.

So, when the population of the US doubles before the century’s out, the answer is to just build smaller and taller?

The fantasy is that somehow, magically, cities will reach a pleasant size with room to bike and walk and sip lattes, all while enjoying a pristine environment. The problem is–that never, ever happens. Cities grow, or they decline. That’s a mantra for every city of meaningful size in the US. Even NYC.

Cortright’s just another stooge in that fantasy–that we can have cake, eat it too, then eat it again–and there’ll always be cake left on the plate.

I only slam portland traffic planners because of their idiotic decisions. Like taking a 4 lane arterial like interstate ave. and making it into a 2 lane road thinking everyone is just going to jump on the max. WRONG they just drive on the very few side streets to avoid the huge rush hour back-up on interstate. Why push comuter traffic into the neighborhoods? Idiots
Joe seems smarter than that from what I read here
We voted down the yellow line several times and they ramed it down our throats anyways. They ruined traffic on interstate and now there are people who fight improvements on I-5 that would help alleviate problems on interstate ave. Damn freeway trolls

Interstate Avenue is an example of just what we need more of. Take an old beat up state highway and share that public right of way with all modes…walk, bike transit and motor vehicles. Barbur should be next, then Mclaughlin and 82nd Avenue. Interstate Avenue has never looked better, with more to come.
Note: Portland voters overwhelmingly approved the MAX Yellow Line in every vote taken in the 90’s, including the first in ’94 that would have raised $400M in property taxes.

Lenny-
1st- You are wrong on a couple of things.
The yellow line was voted down twice by the voters.
2nd- Interstate is a worse mess now than ever. If you try and drive it at evening rush hour it is backed up forever, cars sitting there with their engines running making smoke and not going anywhere fast. The cars that don’t want to wait in line cut through the neighborhoods. This is an example of govt. ramming something down the throats of the public after they voted they didn’t want it. Who wants to ride a train to the EXPO center anyways? What a waste. Now they are trying to do the same thing in Vancouver after they voted it down there also. Now we have to build a billion dollar bridge to complete some political pipe dream.

Interstate Ave had biking, walking, and motorists before they spent all that money on MAX