The City of Portland Parks & Recreation bureau is seeking comments on a proposed new pump track — which would be the first such facility in the city. The location under consideration is Mill Park, a tiny 5-acre park in southeast Portland (SE 122nd and Mill). The pump track is being proposed by the Northwest Trail Alliance, a local non-profit that has been working with Parks to identify a suitable location for a bike skills park or pump track for over a year.

Portland Parks project manager Sarah Coates Huggins says if the community supports the proposal, the “pilot” would be tested in the park for six months. After that time, they’d reassess community support.

A pump track is sort of like a skate park for bikes. They’re dirt tracks that include berms, roller-coaster bump sections and other features that allow riders to carry speed through using their legs and arms to “pump” their bike around the entire track (if they’re good enough). 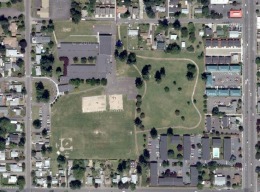 Bike skills parks first came on Parks’ radar back in November 2008, when southeast Portland resident David Reese proposed an idea to build one at the vacant Washington High School. A few months later, another potential site was identified by the Portland Development Commission. Neither of those projects got off the ground, but momentum has continued to build for the idea ever since, and the Northwest Trail Alliance has helped further their cause by successfully demonstrating skills parks at Sunday Parkways events.

“We see it as a kickoff, a demonstration project and one we think will demonstrate the viability and popularity of these types of neighborhood parks.”
— Tom Archer, Northwest Trail Alliance

Northwest Trail Alliance president Tom Archer says he hopes the Mill Park pump track (which would be an all-dirt track without the wooden features of their modular skills parks) becomes a reality. “We see it as a kickoff, a demonstration project and one we think will demonstrate the viability and popularity of these types of neighborhood parks.” Mill Park Elementary is directly adjacent to the proposed site and Archer attended an open house at the school on Tuesday.

Archer said his group would be responsible for designing, building, and maintaining the park if Portland Parks grants permission for them to move forward. With volunteer help and oversight by Northwest Trail Alliance, the facility would take very little, if any, resources from the Parks Bureau.

Parks has a comment form about the project on their website mostly directed at people that live near the park. They’re accepting input on the proposal until September 21st at 5:00 pm.

Awesome News! This will be a great asset to east Portland and the off-road community.

This is much needed in light of the current dearth of MTB trail and access in Portland. I can’t wait!

oh man i would kill to have a spot to ride my bmx at.

I just hope it doesn’t become a hangout for drug dealers!

Since I don’t know anything about pump trucks, I’m curious: what will this look like in winter when it’s raining? Is erosion and track disintegration part of it all or are there steps taken to mitigate such things.

Two thoughts off the top of my head:

1) It’s far enough out to warrant a drive. BMX/MTB/Dirt Jump bikes don’t lend themselves well to a 122 block ride.

2) I know this is just a trial run, but I sure hope the NWTA gets some funding from the city for doing ALL of the work. The great thing about pump tracks is that they’re fun for all ages and abilities, AND super cheap to build. If a skatepark or something similar was to go in, the city would fork over a few hundred grand to make it happen. The NWTA deserves at least a meager stipend for their labor.

This is great, to bad it’s way out there though, but I guess they have to start somewhere.

One great feature of this spot is it’s proximity to the MAX. Any younger riders that can’t drive will still have a good option for access.

This is great news. I work with youth that live in the numbers (East of 205) and if the pump track becomes half as busy as the Ed Benedict skate park, then it will be super packed!

PS Red Five. Are you for real?

If it’s well-designed, there’s a plan in place for upkeep and it gets community support, a pump track ANYwhere in east Portland is well worth the MAX ride for the carless.
Sign me up!

Having engineered 2 private pump tracks across the river in Vancouver, I see this track as a great thing.

It is a reality that the distance will make those who do not live locally drive.

The style of bicycle needed to ride effectively does not lead to riding any distance at all.

Also, except for lame and overpriced permitting process, pump tracks are so easy and cheap to build that there should be one in every section of the city.

I have communicated with Vancouver officials on the note of building pump tracks, and there was a good amount of enthusiasm about it, followed by the mention of a unbearable $100,000 dollar permitting process. (per track)

This number seems huge to me. It appears it was based on a BMX track design and placement, but is what they (City folk) were saying is the hurdle….

Drug dealers? They hang out only where people tolerate that kind of stuff.

Far out there?/warrants a drive? How out of shape are you.

this is rad! end of story. I’m going to build up a sweet bike just for that track…oh wait it’s not built yet. please hurry.

“Since I don’t know anything about pump trucks, I’m curious: what will this look like in winter when it’s raining? Is erosion and track disintegration part of it all or are there steps taken to mitigate such things.”

In my mind a pump track in a public space will require a dedicated group of volunteers to maintain.
Issues such as:

Riders trying to dig the track into more jumps, or into what they feel should be ridable, before they realize what is there is shreddable.

Erosion, especially after heavy rain, is great.
Worse yet is the effect of the pump track being ridden when not fully dry. There should be serious signage warning against riding this when wet, for the future of said pump track.

I have dug in very effective gutters( french drains) in my pump track, which render it ridable within hours of heavy rain, but they could and should be considered a liability in a public space, as they are a front wheel trap.

The only real way in my mind to have a lasting public pump track, is to have a crew, at least twice a month if not more, show up for a hour or more of maintenance work.

Pardon my rambling, and what may seem to be an effort to be a know-it-all, but pump tracks are what I do……

Thanks for the amplification. From just seeing the one photo with the article, I was picturing it in winter as a sloppy and muddy mess and wondering how navigable it would be.

I love this. There are multiple comments about how far out it is as if it is a bad thing? What, only people that live on Belmont and 20th ride bikes? If it was closer then it would be further for the people that live in deep SE. No matter what location some people will be close and some far. I live in inner SE and would be glad to ride out to 122 to enjoy some fun on a track. I would also enjoy one in the park next to my house but am happy there will be one somewhere.

Red Five: so you think a vacant school property would not attract drug dealers, but if a bunch of offroad cyclists hung out there it would suddenly be a haven for drugs? Ask the neighbors of The Grotto BMX/Freeride jumps if there is more or less criminal activity since those jumps were put there and it became a spot to ride bikes.

I know, I probably shouldn’t feed the trolls.

This seems like an place to tap in the PDX BMX scene. Pump track + dirt jumps = BMX crew to help with keeping up the track/jumps!

Echoing #10, if this was anyway near as packed as all the PDX skateparks it would be a huge success.

Is there any news about the Gateway Green project? Seems like a year since any activity/word.

I wouldn’t hold your breathe about dirt jumps going in dude.

This does say pump track………

Dabby’s right… there are definitely no jumps planned for this park. Just turns and berms folks!