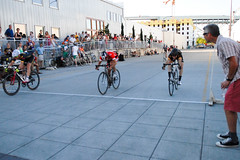 Portland’s Pearl District played host to a rare form of bike racing on Saturday evening when local Ironclad Performance Wear Cycling Team held their first annual Street Sprints competition. The format was simple: a three-block, side-by-side (no drafting) sprint between four racers at a time. The top two from each heat moved on and the bottom two moved to the sidelines to watch. There were separate classes for men, women, and fixed gear racers.

The loading docks common to the Pearl’s northern industrial district made perfect bleachers for the lines of spectators along the course, and the racers gave them plenty to get excited about. 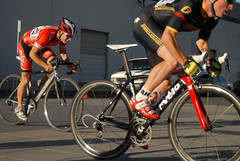 Jeff Harwood on his way to victory.

There was some talk that this was the “first-ever,” officially sanctioned street sprints competition in Portland. But according to Oregon Bicycle Racing Association official Mike Murray, he competed in a similar race back in the mid-1980s. Among his competition was none other than U.S. track racing star Nelson Vails.

Ironclad followed up this event with another first; a criterium race through the streets of downtown Hillsboro. Way to take it to the streets Ironclad!

Here are the champions of the 2010 Ironclad Street Sprints (80 racers competed):

More photos of the action from Dave Roth and Jose Sandoval. Get more racing information at OBRA.org.

Holey mole! what a great event. How long was it. Looks really relaxed, how many were there, how many competed?

We had just over 80 riders in all the categories. It was just short of 3 blocks long.

Man! I’m sorry I missed that. Will it be a recurring event?

We have already laid out plans to make it bigger and better next time around – we hope to do both a Saturday night event, as well as a 3-Wednesday series after Tabor ends next year.

We also will borrow from the track and separate the initial pool into an “A” flight and a “B” flight – thereby ensuring every rider at least 4 heats instead of the one-and-done facet we had this time around.

It was our first go, and with many first go’s, you learn what to do to improve as we did.

I had a blast!