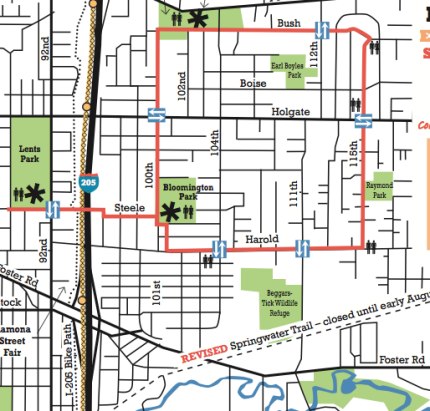 Organizers of this weekend’s Sunday Parkways event in East Portland had hoped their route would show off a freshly paved portion of the Springwater Corridor Trail. But now, due to late June rains that pushed back the schedule on a major repaving project on the Springwater, the Portland Parks and Recreation department has informed PBOT that the trail will be closed on Sunday (7/18). In response, PBOT has issued a revised route map for the event.

The original route extended south from Lents Park via the I-205 mutli-use path to the Springwater Corridor Trail, where it then headed east along the trail before turning north on SE 101st Ave. and up to a northern loop that reached up to Ed Benedict Park on SE Bush. Now, the entire southern loop has been cut off leaving the northern loop and an extension to Lents Park for a total route distance of 4.5 miles.

This news is also a blow to volunteers and Lents residents who spent time and money to get ready for the event rolling through their neighborhood: In a comment below, Lents resident Cora Potter writes,

“Volunteers gave up a lot of their time and the neighborhood association spent a lot of their funds to organize for extra vendors, music and activities in the Lents Town Center because of the Sunday Parkway. Now, less than a week before the event, all of the people we organized to entertain are no longer being directed to the area.”

Potter hopes Sunday Parkways attendees will still make the extra effort to leave the official route and ride down to the Lents Town Center via the I-205 path to enjoy the party.

For more information on what will be the third of five Sunday Parkways events this summer, visit PBOT’s website.

To see the latest updates on the Springwater Trail closures, visit the repaving project website.

Anyone have dates for when the eastside river path from Sellwood to OMSI is going to be shut down?

I was hoping the SE Bush Bike Boulevard would be completed in time for this event, too, but except for the new path through Ed Benedict Park, there is no sign of progress.

This is a scheduling SNAFU. Parks should have been aware of Sunday Parkways, and held off on starting the repaving when it became clear it wouldn’t be done in time for Parkways.

This is a real blow for Lents. Folks, be sure to visit the Ramona Street Fair, next to the I-205 MAX station, this Sunday. It’s a great place to kick off your Sunday Parkways, and we’re just a short ride up the multi-use path from the new parkways route.

While that closure will be a pain in the ass, last week I did take Milwaukee ave from Sellwood/Moreland through the Brooklyn neighborhood. Once I crossed Powell, I cut down the side streets and under the new HWY 99 overpass back down to OMSI.

Obviously not as safe or quick as the riverside Springwater, but it wasn’t bad. Commuters should find it OK, though I doubt recreational users of the path with kids, etc. would attempt it.

I think it seems a little silly to delay major contracting work for a single multi-hour event, especially one that was in danger of being canceled due to lack of funds.

I think Sunday parkways is great, it seems easier to change the route than to mess around with a construction schedule.

a.k.: they had another segment of the springwater they could have chosen to work on instead.

Volunteers gave up a lot of their time and the neighborhood association spent a lot of their funds to organize for extra vendors, music and activities in the Lents Town Center because of the Sunday Parkway. Now, less than a week before the event, all of the people we organized to entertain are no longer being directed to the area.

Was all that volunteer work and investment silly?

Everyone – please make an extra effort to come to the Ramona Street Fair and Lents International Farmers’ Market at Lents Town Center. We really worked to put together a great party for you and would hate for you to miss it.

On the west side of 205 at the freeway – just head south on the MUP and you’ll find us!

Cora: Fair enough, I had missed where that much organization had gone into an area that is now far removed from the new route and can’t exactly be moved. Foot dutifully inserted into mouth.

I feel if Sunday parkways is intent on spurring out to lents park, that they could add a spur out to the street fair, then at least riders will visualize it more and attend.

A 4.5-mile loop will feel “silly” to more than a few potential Parkways participants. I agree that this scenario could’ve been avoided with a little more advance planning from Parks and Rec, and I don’t blame the folks in Lents for crying foul at all.

Yeah, how about a spur to the Lents Street Fair?

And a 4.5 mile loop is fine, you can always ride it twice if your kids are hankering for more.

Seriously, how long does it take to pave a section of pavement a few miles long that’s only ten feet wide? They can pave miles of freeway in days. This is absurd.

I agree with you, Hart. I was out this morning and they had a few construction workers tearing up the existing asphalt under I-205. Some stretches of asphalt are still there.

One would think Parks could get the contractor to expedite this given the importance of the event to our community.

well the shorter route makes it easier to volunteer. typically doing a 3 hour shift as an intersection superhero doesnt leave enough time to leisurely ride the entire 7-8 mile route, and to stop and walk around all the parks.

Wait, why are they tearing up what’s already there? I thought they were resurfacing, all they need to do is put down an inch of new pavement over what’s still there.

Is the fair on Ramona Street? Where is the nearest access point from the MUP? maps.google isn’t very clear on that point, showing four (!) variations of the MUP, there. Can I actually get on/off the MUP at the Ramona cul de sac, or do I need to go to Foster Road? What are the cross-streets for Lents Town Center?

Looks like several quiet, easy, loop routes from Lents Park to Ramona Street. I sketched one out option and left it open for change by anyone who knows better, here:

When coming south on the MUP, approaching the MAX station, you can veer left to go to MAX (and over Foster Road toward Clackamas) or right to go to Foster Road and the Lents Town Center.

Veer right, toward Foster Road and the Lents Town Center.

Thx, Nick! Sounds like “I’ll know it when I see it.” (mmm, bike pr0n!) Just trying to nail it down for the less-intrepid I’ll have in tow.

Also found this, still up from 2009 but I think the same location, SE Ramona Street & 92nd Ave: