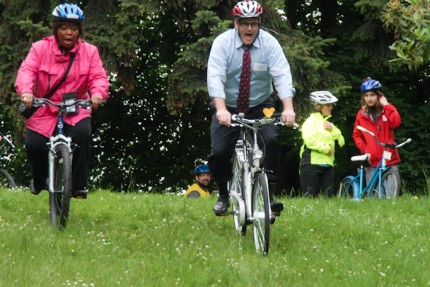 On Friday, Portland Mayor Sam Adams joined a handful of Oregon state representatives to support the City’s Safe Routes to School program. Adams, along with City staff and bike safety education specialists from the Bicycle Transportation Alliance, rode with a fourth grade class from Humboldt Elementary School to Overlook Park. 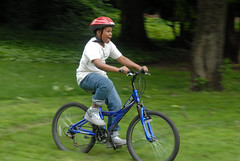 When they arrived at the northern end of the park, the kids were given the option to ride down (or “bomb”, as the instructor put it) the steep grassy hill. Several of the kids jumped at the opportunity, squealing with equal parts terror and delight as they gained speed and coasted onto the park’s large grassy field. Once they had all made it down (with lots of supportive cheers from classmates), Mayor Adams and the kids’ teacher, Patrisha Porter, decided to take the plunge too.

It was a great moment for kids to not only ride down the hill themselves, but to see their teacher and the Mayor of Portland follow suit! When asked by one of the City staffers what their favorite part of the Safe Routes class was, the kids all yelled, “The hill! The hill!.” 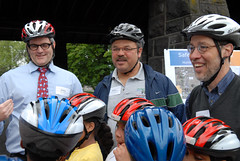 Afterwards, all the kids assembled in front of Adams and state reps Michael Dembrow and Lew Frederick to demonstrate some of what they’d learned in their Safe Routes class. The kids exuded the kind of energy and confidence that only fun physical activities like biking can bring.

Mrs. Porter was also presented with a special plaque congratulating her class for completing 10 hours of bike safety education. The City of Portland’s Safe Routes to School program currently serves over 70 schools. The BTA contracts with the City to provide instruction and other services at about half those schools.

UPDATE: And here’s a brief video of the event put together by the Mayor’s office:

Bombing the hill is not how you support safe riding, or responsible riding.

Enough people bomb the hill and you destroy the grass which leads to erosion problems in the park.

Grass is for looking at, not for trodding or sitting upon!

LOVE IT! That is a great photo!

ms. or mr. anonymous above sounds like a party pooper….

What a great photo! You should post a fun photo like this every Monday morning, for all us office workers with the Monday morning blues!

This isn’t about safe riding, or responsible riding. This is about having fun for a change. It’s why 99% of us started riding a bike in the first place.

If it were bad enough to cause erosion problems, all of those kids would have had nasty backspackle.

This only tells us we need MORE places where kids can safely “bomb” a hill and not trash the park, etc.

Oh and “Bombing” is a great way to lose teeth and break bones BTW.

I learned the hard way.

Sam certainly needs to bike a little bit before he hits 300 lbs. Really, this phony never really rides it is obvious. Sorry people, a pathetic mayor, doing the bike community more harm than good. The backlash from the sewer fee/bike funding is going to really hurt in the future.

Does Patrisha have that look on her face because she just realized that her front brake is not connected? …good thing she is wearing a helmet, safety first.

He’s looking a little like the Stay Puft marshmallow man. Yeah I don’t think Sammy breaks a sweat too often.

The change you asked for!

I know this is cute and for a good cause, but (1) irony is frustrating. Here we have a mayor and a bunch of kids riding on the grass, while efforts to expand responsible offroad cycling are being stymied at every turn, existing options are under constant and increasing attack, and much of the local “cycling community” is indifferent or even hostile.

And (2) it paints yet another image of improper offroad biking for the public mind. The average citizen’s image of mountain biking is a vague mishmash of aggressive Mountain Dew-fueled riders blasting downhill and mowing down whatever is in their path. Images of ACTUAL, responsible biking — what cross-country mountain bikers actually DO — are few and far between. This is not helpful.

Sam doesn’t have a clue

Mike on a Bike,

Guess you need to learn about how erosion starts.

Ride down a fall line enough and you compact the soil. This causes the vegetation to die off. Once the vegetation is gone the wind and rain do their thing and remove the compacted and dried out soil.

This is how bad trails get created and major erosion problems start.

But it’s all about having fun so that makes up for being irresponsible.

Anonymous-
Good catch on the front brake. I had to go back and look at it again.

Although, if she doesn’t ride a bike, it may have been disconnected for her own good.

Adams is a great example of how bicyclists are ruining Forest Park.

Dude, its just a hill in the park, let the kids have some fun. So what if someone gets a bruise!? That’s the whole point of being a kid. No one is going to break a bone on that tiny hill. The important thing here is that they are biking to school and learning bike safety. And the hill is a grass lawn, not a forest park with precious wild life and giant trees.

its all about kids having fun on bikes. nothing wrong with that. teaching kids about being just a little fearless. bomb the little hill while wearing a helmet.

you know there is a happy medium and this looks like it to me.

maybe after the “safe routes to school” training some of these mountain bikers can have an advanced class: “how to ride off road without causing too many erosion problems” I can see the waiting list already!

Most of this class is spent learning to ride on city streets safely. Bombing down grassy hills is just a reward for another day of great hand-signals, proper lane use, right-of-way adherence and all-around safe street riding.

Consider volunteering for a BTA bike safety ride sometime. I can guarantee that it’s more rewarding than whining on the internet.

Well the sight of those kids in the video – how proud of themselves and happy they seem – offsets, for me, any qualms I might have about them taking what appeared to be a *single* victory ride each down a grassy hill.

It’s grass; it’s quite a hardy and vigorous plant, especially this time of year. Take it from someone who spent one half of last Sunday hacking out chunks of turf from what is nominally a garden (and then spent the other half of Sunday sneezing).

FYI Carl, that wasn’t a reply to you; I posted before seeing your post. But thanks for confirming what I was thinking about the nature of the victory bomb :).

Keep up the good work!