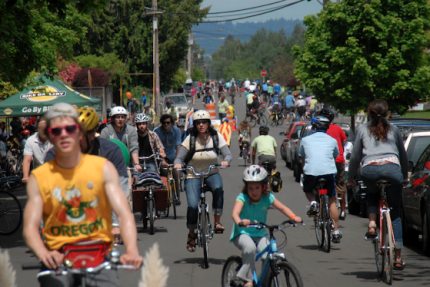 After a few raindrops, the first of five Sunday Parkways events kicked off the 2010 season with a bang in Northeast Portland today. People and bikes of all shapes, sizes and colors flocked to the streets to enjoy the carfree calm and explore neighborhoods full of activities around every corner. 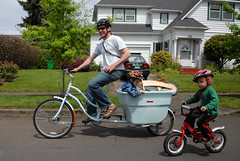 The turnout was massive. Parks along the route were especially packed as people took time to enjoy the sun, live music, and the atmosphere in general. Many people I talked with seemed to notice the same thing — families and kids. This was the largest showing of the growing trend in family riding I’ve seen at any event to date.

Mayor Sam Adams was at Alberta Park doing an interview with The Oregonian when I rolled up. Afterward we chatted a bit and even he mentioned the amazing number of kids and families on bikes. Xtracycles, bakfiets, tag-along bikes, tandems, kids riding solo — there were little ones everywhere! 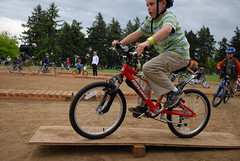 The bike skills park set up at Alberta Park (thanks to NW Trail Alliance) was busy all day long. Kids were lining up for their chance to ride the balance beams and teeter-totters. Mayor Adams took note — now I wonder if he and Parks Commissioner Nick Fish (see below) could put their heads together and find a permanent home for a bike skills park?!

Also at Alberta Park, I learned about an exciting new bike club in town — Girly Bike!. This group, started by Pandora Patterson (who was out riding when I stopped by her booth) is devoted to women who want to ride bikes. They get together, host clinics, go on rides, and generally provide a network to make riding more fun (and less intimidating) for women.

I was also struck by the diversity of people out today, both in terms of age and race. Sunday Parkways truly appeals to, and is appreciated by, seemingly everyone in this city.

Other highlights from today: 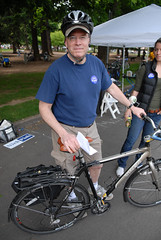 Now in its third year, the positive word-of-mouth about Sunday Parkways has spread far and wide. I overheard several people saying this was their first one ever and I suspect it won’t be their last.

See more photos in the gallery or in the slideshow below.

PBOT is planning four more Sunday Parkways events this year. Funding is tight (they didn’t get support from the general fund as they requested) and they are also concerned about getting enough volunteers to keep things going smoothly. Learn more at PortlandSundayParkways.com.

I heard everybody thanking the cops but few thanks were shouted at the volunteers. The cops get paid to stand and direct traffic for us, the volunteers don’t. Maybe we should make sure they’re getting more props so we don’t end up understaffed.

Wow! I’ve been to all of the Parkways, and they keep getting better. I have friends who don’t like riding through all the kids and crowds at these events, but I love seeing all the future riders out there owning the road.

One thing I did notice: a lot of people packing their bikes up onto cars at the end of the day, and driving off. I wanted to tell them “You can ride all the way home if you want. All the roads are yours, not just the route!”

You won’t see people driving to the route when it’s in SouthEast.

Funny, but I think car-topping is more widespread than that. I’m all for people driving their bikes to an event like this if they have to deal with moving children far distances, but I got a sense that some people weren’t prepared to ride at all outside of the Parkways route. They need encouragement, and the city needs to take the safety of all road users seriously, so that they will gain the confidence to ride every day, not just on special events.

I only meant that likely a high number of the riders today drove up from SE. I have no basis for that assertion other than intuition.

were the naked cyclists there?

It was a great time. We were lucky in that we lived inside the big loop of the route, so it was an easy ride to the route…

I made the comment to my wife that we need to go to the rest of the Sunday Parkways…it took a little bit to convince her that car-topping to the route would kinda defeat the purpose. 🙂

@Hart: We heard (and helped with) a lot of thank-yous to the volunteers as well..but yes it is needed.

I am still amazed that shortly after moving to Oregon, I went to volunteer as a corner worker at an OBRA road race…and had people *in the middle of their races* yelling thanks to me.

Hopefully you run into Monsters of Rock mobile rock show next month.

Yeah, the crowds can be hairy at times, but that sort of forces you to slow down and enjoy a leisurely ride, rather than being competitive (or whatever normally drives you while cycling).

I decided to take my nice bike rather than my beater, so I didn’t stop anywhere, but it was a nice loop… did it about 2 times counter-clockwise.

My only complaint would be the same adults who “car top” it to the event are probably the ones that would stop, SUDDENLY, right in the middle of the street. That was my one pet peeve and caused a number of traffic jams along the route at various points.

I would agree with Hart (#1) that we need to give more props to the volunteers. Sunday Parkways would shrivel to fairy dust if we didn’t have all of the volunteers.

To all of you who volunteered, thank you!

For those who want to volunteer: http://www.portlandsundayparkways.org/

A grand time! I was really impressed with how packed the course was. Having Ainsworth carfree really gave me goosebumps.. what a wonderful asset we have on that street when there aren’t cars zooming by.

I’d like to remind people on bikes to ride slowly through the course, and be especially mindful of people on foot and those with children. Dismount around the vendor stations and support the businesses(and calm walking conditions!)

The other thing to consider is having vendors park much further away from the park then the very street surrounding it. It really sucked up a lot of street space around the parks that would have been great to have for people.

Thanks to all the organizers and volunteers!

Guess I’ll be a scrooge and say that I was very disappointed with Sunday Parkways. It seemed regimented; we were always being channeled, stopped or started as we rode around. When I was a young child my block had an annual Street Dance. Car traffic was blocked off, there was live music and the adults danced in the streets. Kids rode their bikes, played games, bought ice cream from vendors and watched the adults having fun. I expected Sunday Parkways to be something like that but it was the opposite. There were still way too many cars going through the route, even in the parks. Instead of the streets being free they were controlled by legions of police. And if you wanted to do anything other than ride a bike in the carless street, forget it. You would have been run over by bicylists.

Someday there will be a Sunday Parkway in Southwest Portland. Not downtown, mind you, the real Southwest (Multnomah, Hillsdale, etc.) Then I will attend. And maybe even volunteer! Because I admit I’m a little tentative about riding clear across town to attend when I’m really not comfortable doing so. I’m not interested in “car topping,” either. Sigh.

Volunteering is easy and fun. I volunteered for the very first one and for one last year and for this first one this year. I received lots of thanks and I shouted thanks to as many as I could when I took my turn on the route. I encourage everyone to sign up for just one shift. They really do make it easy.

I was watching the NBA game On KATU whe they ran a ad biching about all the bike lanes in Portland . Whatever, it will be on the 11:00 news on monday night. Maybe these TV jack-off’s should go to a sunday parkways and look around. It will never happen, they all want to be Lars Lawson.

One of the nicest things about Parkways is that it encourages Portlanders to get out of their houses and explore the beauty of Portland’s many city parks. I was signing in at the volunteer tent at MY local park (yay Woodlawn!) when I overheard one woman say to another, “What a gorgeous park — who knew this was even here?”

Portland’s parks are beautiful little gems that dot the city. Parkways is a great way to get out and enjoy more of them.

I agree, Beth – there are so many nice parks tucked into neighborhoods that you don’t know about. Sunday Parkways showcases them nicely.

Such a great event! Lydia and I volunteered this year so I didn’t get to see the route (got to know 21st and Ainsworth very well!). But it was the most playtime I’ve had on my ukulele for a long time. Lydia kept making up verses that had the kids smiling and pedaling harder (“the wheels on my bike go round and round, round and round…”)

I WILL be riding the next one, for sure!

Thank you volunteers! Sunday Parkways NE was awesome – I’m looking forward to the other 4 events!

It seemed like there were fewer “racer” types this time out than there were last year. Also, there were still a lot of cyclists out on Ainsworth after the official end of the event – it was nice to see. Thanks everyone who was involved, it was great!

I would like to concur with Pico on this event , that is was totally AWESOME! I was volunteering at an intersection and got tons of “thanks” and I would like to say thank you to everyone who came out and participated. This is a great & FREE event for families. I encourage all Portlanders to come out to the next and every Sunday Parkways.

I would also like to thank the houses around the intersection, who were totally hospitable, letting us use their trash cans, bathrooms and even brought us Lemonade.

This is the type of event that can encourage a child or community to a lifelong commitment to health and having fun!