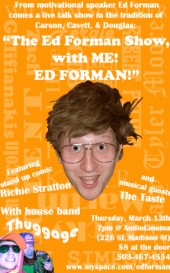 Tomorrow night (Tuesday, 4/20) biking will be the focus of the The Ed Forman Show, a live comedy/talk show held weekly at Dante’s in downtown Portland (1 SW 3rd Ave). I’ll be a guest on the show along with Shift volunteer and general bike fun activist extraordinaire Meghan Sinnott and tall-biking, gravity biking, acrobalancing superstar Jon “Dutch” Paglia (whom you might have seen performing at Filmed by Bike over the weekend).

Curious about what to expect? Here’s how the Willamette Week describes the show:

And here are my fellow guests: 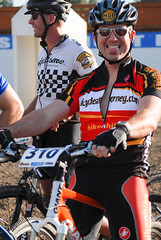 UPDATE: Owner of Hopworks Brewing, Christian Ettinger, will join us on the show with his awesome and famous beer bike. I’ve added a photo of Christian above.

Hopefully I won’t regret doing this (just kidding)! If you’re into late night entertainment (the show starts at 9:30 pm), roll over to Dante’s for what should be a good time. More about the Ed Forman show on his MySpace page.

oh come on Dan! this one random guy at BFF was telling me about how all zoobombers are “media whores.” Since that’s the case, it’s only a matter of time before Dutch breaks onto the national scene. and then he’ll be the Spandex Superstar…mmm…

thanks for the socks, by the way! you’re the best! since i’ve also heard that we’re all meth addicts, I’m going to sell them for some speed. yay!

I love you guys! i might break my curfew tonight and come down to dante’s.

media whores? ZooBomb? I think people are confusing ZooBombers with the people on the zoobomb internet fansite.