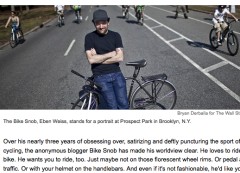 It was big news on the bikey interwebs yesterday when the man behind the most popular bike blog in the world BikesnobNYC revealed his identity. Eben Weiss is the Bike Snob and his coming out day was a pretty big deal.

In addition to his uber-popular blog, Weiss is a regular contributor to Bicycling Magazine and now he’s got a new book to promote (hence the big reveal). He’ll be in Portland this June to promote it (details below) so I thought it’d be fun to ask him a few questions. Read the Q & A below for his feelings on bike advocacy, the Portland bike scene, and how he is (or isn’t) selling out bike culture to make a buck. 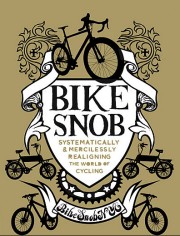 Published by Chronicle Books,
due out in May.

You’ve mocked Portland in the past, now you want to come here to sell your book? Isn’t that a bit hypocritical?

It’s extremely hypocritical, but then again I mock everything, including my hometown. Sometimes my mocking is motivated by jealousy, and the Portland mocking is one of those cases. (Though you people do get pretty silly.)

Chances are there will be some sort of themed and/or costume-encouraged ride when you’re here in June. Would you show up to something like that?

Absolutely yes, but absolutely not in costume.

You’ve been to Portland before and it’s obviously a much nicer place to bike around than NYC. So, have you ever thought of moving here?

“Sometimes my mocking is motivated by jealousy, and the Portland mocking is one of those cases. (Though you people do get pretty silly.)”
— Eben Weiss

I recently paid my first real visit to Portland (meaning longer than a single day), which you’ll be able to read about in the May issue of “Outside” magazine which hits stands on April 27th (he plugged gratuitously). It really is a great place to ride, and I was also lucky to ride with some great people and participate in an Ironic World Championship. You even met with me even though I was a complete stranger, which goes to show how friendly you all are. Sometimes, when I visit other cities, I think to myself, “I’m an idiot to live where I live,” and Portland is one of those cities. Still, by the end of my visit I started getting homesick. I’ve never lived anyplace else and I don’t know what would happen if I tried. The pleasantness of Portland might eat me alive.

Did your editor encourage you to tone down your snarky critiques in order to appeal to a wider audience?

Not at all. Chronicle also made the book look great, which should come as a relief after looking at my cheesy blog. (I did manage sneak in some of my lousy photos, though.)

With this book and the promotion around it, are you worried that some of your fans will think you’re selling out bike culture to make a buck or two?

It’s not like I did a bunch of market research and picked cycling after ruling out skiing, kayaking, and windsurfing. I would hope people realize that I genuinely love cycling, which is why I write about it. I also love writing, which is why I work hard to maintain a blog that people can read for free. On top of that, I’m very proud of my book, and so I’m proud to promote it. As far as “selling out” goes, if by that you’re asking if I’ll continue to write the best free blog that I can, then the answer is “yes.” I’m extremely lucky the blog has opened other opportunities for me too. Really, everyone wins.

How would you define the Bike Snob’s contribution to bike advocacy? Or, do you feel there even is one? Do you think about advocacy at all when you write or do you think of yourself more as a literary comedian/humorist?

I’m definitely a cycling advocate in that I love it, it makes my life better, and I want it to be accessible to others so they can experience this too. That’s why I especially like making fun of “cool” cycling and the sorts of things a new cyclist might find intimidating and off-putting. Obviously I want to entertain and I’m smart enough to leave the real advocacy to the pros, but I like to think I help encourage a “Get on your bike!” attitude. That’s important to me.

According to stories I’ve read, you’re buddies with Lance. Any thoughts of starting a Bike Snob Foundation to raise money for a cause?

Every day, millions of housepets are forced to wear stupid sweaters and other forms of clothing that they don’t need because they were born with fur. Expect me to start flogging “Support Naked Pets!” awareness anklets in the not-too-distant future.

Bike Snob: Systematically and Mercilessly Realigning the World of Cycling goes on sale April 26th, but you can pre-order it now at Powells.com (and you support BikePortland in the process!).

Stay tuned for more details on Weiss’s visit to Portland in June. The basic details are below.

who will organize a pedalpalooza ride to this signing? i think BSNYC has a rich enough history for the ride to have 12 themes just stealing from his archives.
(pie plates and spandex vs hipsters in rapha clothes?)

Cool, he’ll be around for the World Naked Bike Ride (june 19th, don’t miss it!). He won’t need a costume. Absolutely.

Should we tone down or ramp up our famous Portland smugness during his visit?

He mocks Portland for organizing rides for the most trivial events so it seems fitting to organize a ride for his book signing. That’s pretty funny in an ironic way.

So if he doesn’t put on a costume on the themed ride we won’t be able to smother him with our smugness?

We’ll see about that…

I’m with KWW. It should be a ride with what he dumps on the most.

I thought BikePortland was the most popular bike blog on the planet?

He said he’d not be in costume for any ride… WNBR’s in June… Perhaps we’ll get to see more of him that we want to?

The theme of this costume ride is to dress like a bike snob…gotcha Eben.

KWW, wouldn’t that simply be everybody coming as themselves? I mean, who’s left?

How does buying the book help bike portland?

erik,
BikePortland has an affiliate sales program agreement with the one and only Powell’s books. When readers link over to powells.com from bikeportland.org and purchase items or sell back books, BikePortland receives a 7.5% referral fee. One way to support a couple local independents at the same time.
Thanks for asking.
-JR

I’ll be riding (rocking?) my recumbent.
There’s no way I’ll convert it to a brakeless fixie, but maybe I could throw on a top tube pad and some hipster cysts.

Ooo and an Orange Julius cup in the bottle cage.