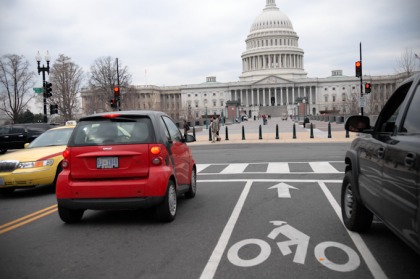 Watch a slideshow of our best images below or view the full gallery.
(Photos © J. Maus)

I came into the National Bike Summit this year feeling pessimistic about national politics and not feeling very attached to the national cycling agenda. Now, as I recall the events of the past few days, my energy and inspiration has been renewed.

“We have a good chance of prevailing if we can mobilize the full breadth of our movement and make our voices heard.”
— Keith Laughlin, Rails-to-Trails Conservancy

At the Opening Plenary session, Congressman Earl Blumenauer’s remarks seemed to lack the usual fire and brimstone that had whipped the crowd into a fervor in years past. This year — instead of bemoaning the “weasels” in power or gushing about the hope of a new administration — he spoke of political gridlock and pleaded, almost desparately, for the help of the 700-plus advocates in the room.

“I’ve been here all my life and have never seen anything like we’ve had over the course of the last year… We need your energy, your vision, your blueprint for how to make things better.”

This would become a recurring theme at the Summit. Not only is politics uglier than usual these days, but, with a re-authorization of the federal transportation bill hanging in the balance, that energy and vision is needed immediately.

Oberstar spoke of a “critical year” for bicycling. Keith Laughlin, president of the Rails-to-Trails Conservancy, said during a breakout session that the Active Communities Transportation Act is the “most important bike legislation in the last 20 years,” and that, “we have a good chance of prevailing if we can mobilize the full breadth of our movement and make our voices heard.” A Congressional staffer in the same session said, “We’ve got to get going now… We don’t have time.”

It was clear, our champions in Congress can no longer break the gridlock on their own; they need an assist from the people, and they need it right away. I’m happy to report that the people delivered.

[The slideshow below features a selection of photos from the Summit. Browse the full gallery here.]

A record number showed up for this Summit. During a speech Thursday morning, Congressman Jim Oberstar recalled jokingly, “We used to be able to do this in a phone booth!” There were less than 100 people at the first Summit; that’s about the same number of Trek dealer reps that showed up this year.

That rise in Summit attendance mimics a rise in federal spending on biking and walking projects. In 2000, $296 million was spent. In 2009, that number had jumped to $1.1 billion. But it takes more than sheer numbers to get what you want in D.C. It takes the right issue (which we have) and a multi-pronged attack. 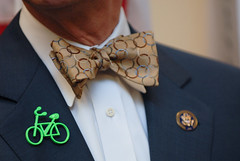 The power of the pin.

Wednesday night, the political action committee Bikes PAC hosted a dinner and reception. 10 members of Congress showed up and a record amount of money was raised (six members showed up last year).

That party was just one of many that took place each night after the official Summit came to a close. If an increased number of nightly shindigs is any measure of the bike movement’s progress, than it’s safe to say we’re doing pretty well.

Unfortunately, it takes more than fancy parties to influence politics — especially when such a pall hangs over the Capitol. But the bike movement, because it’s rooted in fun (no matter how wonky you try to make it), has the power to lift spirits even in the most cynical of towns. The sausage making in Washington is hard to stomach, but when 700 smiling and positive bike advocates come to town — each one of them armed with a bike pin on their lapel and a sack of them to give out (thanks League!) — amazing things can happen. 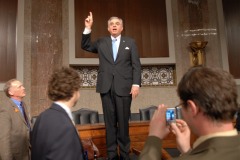 US DOT Sec. Ray LaHood. On a table.

When US DOT Secretary Ray LaHood — who Blumenauer credited with “pushing back the forces of darkness on the Hill” — hopped up onto a table in a packed room of advocates at the closing reception Thursday night, it was the bike movement that lifted him up. When Republican Congressman Tom Petri hopped on a pedicab and pedaled down 1st Street, it was the power of 700 bike pins at work. When 10 members of Congress left a fundraising dinner with a smile on their face (an unprecedented thing on Capitol Hill, as reported by one of the restaurant staff), it was because bicycling — in all its forms — is one of those rare issues that has the potential to appeal to a vast spectrum of political perspectives.

Or, as Congressman Blumenauer put it during an intimate dinner with the Oregon delegation on Thursday, “You might not have signed everyone up, but no one is negative about the bike agenda.”

The idea of bicycles, and the people that deliver its message, lifted the clouds over Washington last week. Now our challenge is to remind politicians that as long as they’re on our side, they can expect sunny skies ahead.

That concludes our 2010 National Bike Summit coverage. Thanks to everyone who followed along both here and on Twitter. And a special thanks goes out to Planet Bike for their generous support of our work.

You can browse all 19 of our stories from the Summit and find a link to our photo gallery on our special coverage page.


UPDATE: Check out this excellent video wrap-up from Streetfilms:

I like the first image of the bike lane pointing straight towards the capitol building while the cars are deflected by the bollards and forced to turn away. Hopefully it’s symbolic of future policy.

Senator Merkley and staff rode the entire LAB Bike Summit congressional bike ride with me and Randy Miller and a hundred others Friday morning in the wind and rain – the first time a Senator has ridden that ride!

“You might not have signed everyone up, but no one is negative about the bike agenda.”

That is indeed progress.

Striking observation: Apparently the only person of color at the bike summit was a “cafeteria staffer”. The national bike community is going to need to work on this.

BP-
Thanks for the excellent coverage of NBS’10. I hope your coverage helps motivate & excite other Portlander’s to support and (hopefully) attend next yrs Summit – I know it has motivated me to get involved for next yr.

Confusion- Bill, were you at the summit?

It looks like from the video 0:21 there appears to be an African American woman at the Alliance for Walking and Biking booth, plus Allison Mannos from LA County Bicycling Coalition, plus Kimberly White from Recycle-A-Bicycle, plus Anthony Taylor from the Bicycling Club of Minnesota- all just from the short video.

Maybe the video was not shot at the summit?

I love that Camp Bike Fun is reaching out to include/ involve communities of color (www.CampBikeFun.com), and I love the CCC’s Understanding Barriers to Bicycling project too.

I see a need for the Summit to include/ involve people of color more. I just don’t see from the video your striking observation. Am I missing something?

Jonathan — Thanks for the coverage!