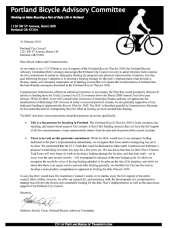 The City of Portland’s Bicycle Advisory Committee — a 13 member group that advises the City on “bicycle-related matters” — has released their letter in response to Commissioner Dan Saltzman’s Bike Plan funding proposal.

The BAC initially intended to draft a letter in support of Saltzman’s idea (after he pitched it to them in person at their monthly meeting on Tuesday), but now they have put some conditions on that support.

The letter states that the BAC will only back Saltzman’s proposal if it could, “… on its merits, enjoy the full support of the entire council.”

Given that I’ve heard from Commissioner Randy Leonard that he won’t vote for the proposal, it seems as though Saltzman no longer has support from the BAC.

Here’s how the BAC explains their two specific “reservations” about the proposal:

This letter by the BAC is significant beyond its face value. The Committee has been going through an internal discussion of late about what type of role it should play in local bike issues. Historically, they have not questioned local electeds (the term rubber-stamp committee comes to mind) and have tended to be more reactive in their positions. By saying essentially, “Thanks, but no thanks,” to a Commissioner who wants to raise money for bike projects, the BAC is showing that they aren’t simply going to sign-off on every pro-bike idea that comes their way.

Read more analysis and reactions to Saltzman’s amendment in the story I published last night. For more on the Bike Plan, browse all previous coverage here.

what exactly does it mean for a committee whose role is to advise the council to say we support it if you do?

The biggest test of an advisory committee is when it has to go against the opinion of city/county/state staff or against the will of one or more members of the body it advises. It’s important because it puts pressure back on the council. Sure, they can approve it, but if they go against their advisory body it can cause issues later. It’s all politics and influence.

To Matt’s point, I like that the committee included the bit about “on its own merits,” implying that the funding (and their support of it) should not come of it as a twisted political drama but because cycling in Portland deserves our City’s investment. As Hen Morgan wrote in her comment on the post about Saltzman’s amendment, the committee is taking the long view (and they should be applauded for it).

Jonathan – I think the committee is charged with advising the Bureaus and the Council, and not just the Council. In practice, I think there is much more review and discussion of Bureau projects than of Council actions.

And I would disagree that the committee has not questioned elected officials in the past. For example, widening of the sidewalks on the Hawthorne Bridge might not have happened without crucial support from the BAC.

As far as the committee being ‘reactive’, in the past that has generally been in response to proposals put forth by the Bureaus that don’t adequately accommodate cyclists (PDOT itself is not necessarily a bicycles-first organization).

If anything has been ‘rubber stamped’ by the committee past or present, it has probably been bike specific plans and projects proposed by bike program staff within the Bureau of Transportation.