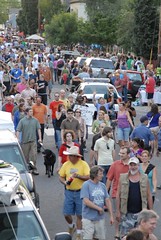 Last night, at a community meeting to hear feedback on the Last Thursday on Alberta event (read my analysis here), Commissioner Amanda Fritz and Mayor Sam Adams heard loud and clear that many people love the event just the way it is.

According to sources at the meeting and reports in the local media, upwards of 400 people crammed into the Acadian Ballroom on Alberta last night. There were many opinions expressed, but it seems the dominant opinion was that despite the growing pains, expense, and crowd control issues, the carfree environment of Last Thursday is something people feel is worth supporting.

“…one thing was made overwhelmingly clear: there is massive community and business support for Last Thursday, despite the cost.”

“The night’s strongest showing of jazz hands [Adams’ alternative to clapping] might have come when one woman said “the city has a responsibility to fund Last Thursday to perpetuity, especially because of all the positive economic reverberations it causes.”

KATU also offered good coverage of the testimony via video:

Last Thursday is Portland’s only regularly occurring carfree event. Because of that, it is an absolute jewel that thousands of people flock to in the summer months. Yes, there are problems associated with those crowds, but hopefully the City and the community can work them out. After last night’s meeting I remain hopeful they can.

— Browse my previous coverage of Last Thursday on Alberta here.

Crap. I missed it. I’m glad to hear your sense of the outcome of the hearing. In spite of the hassles, I think the event is a good thing for our neighborhood. The car-free aspect that you emphasize is an essential part of making it work for everyone.

I’ve always appreciated the neighborhood-based approach to managing the bad-side of the large crowds. I hope that the event can keep this orientation.

My nine-year-old has some crafts she’s been working on to sell this summer. Watch out for cyclops pocket monsters!

Excellent! I was also unable to make the Town Hall sadly, so I’m glad to hear that a lot of support was there.

I’ve always felt as though people living in Alberta griping about Last Thursday are going to be far outnumbered by those living in Alberta praising it, and the show of support from the community just drives that home (kinda like, “why’d you move to Alberta in the first place?”).

Last Thursday is a Portland institution and needs to stay.

Hey maybe Randy Leonard could provide some his wonderful $140K toilets to aid in keeping the event sanitary. Money seems to grow on trees in Portland so that shouldn’t be a problem.

still think they should do it just once a year

i live near alberta and had no idea. come someone explain to clueless me how i can regularly find out about stuff like this?