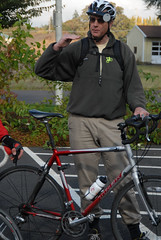 Washington County Commissioner, former Alice B. Toeclips Award winner, and active bike advocate Dick Schouten is running (or should I say riding) for what the Beaverton Valley Times refers to as “Washington County’s top job.”

Schouten announced his intentions to run for the position of chairman of the Washington County Board of Commissioners last week. Schouten is well-known for his dedication to active transportation. He won an Alice B. Toeclips award from the Bicycle Transportation Alliance in 2001 and in fall of 2009, as a member of Metro’s Executive Council for Active Transportation, he went on a study tour to learn more about bikeways in Amsterdam and Copenhagen.

Meet Dick Schouten at our
Get Together next week:

According to the Beaverton Valley Times, Schouten faces a serious contender in Andy Duyck (another current commissioner). Here’s the lowdown on the two front-runners (schoolteacher Doak Schulte is also on the ballot) :

Duyck, a Republican, is known for his straight talk and ties to the county’s agricultural community. Schouten, a Democrat, is a brainy planning advocate more often than not seen riding his bicycle through the county.

You might recall back in 2007 when Schouten got his bike stolen from a MAX train while he sat nearby. Schouten is a regular on the bike advocacy scene. He has attended the National Bike Summit in Washington D.C. several times and most recently, he joined a small group of advocates for a bike ride through Helvetia to meet farmers and experience how the urban/rural reserves process could impact one of our region’s most important natural areas.

You can meet Commissioner Schouten and hear him talk about bike issues on the West Side at our Get Together in Tigard next week (1/27).

Spoke to him today about a safety issue on the trails around the West side. He’s going to talk about that and other issues 1/27 at our get together in Tigard.

I wish him all the best for his campaign.

This is great news! Schouten will be a voice for a more balanced transportation system that gives people more choices.

What Jim said. I couldn’t think of a better candidate to lead the WashCo Board of Commissioners and help establish a stronger and more sustainable vision for the county and the Metro region at large.

This is a clear choice. Schoten has been a strong park and trail advocate.

that’s a right folksy paper they got there in beavertown

Beyond his transportation cred, Dick’s a terrific guy. One of the rare elected officials who almost always seems to want to listen, rather than speak.

And if I’m not mistaken, he grew up in the Netherlands, where the bicycle became a way of life long ago. He can definitely teach the Portland metro area some lessons!

I wonder if he’ll do anything to get jumpseats installed next to the bicycle hooks so cyclists can get a guaranteed seat next to their bike. Really lame that you have the choice of standing for your whole MAX trip or leaving your bike unattended next to a door.

Failing that, time to bring more Type I LRVs into service, since they do have seating for cyclists…

I live in unincorporated WACo and let me say, there are roads that really need some attention for commuting. Beaverton is fine, IMO. It is the roads that don’t have city oversight that are issues. There are too many in key places that cause problems.