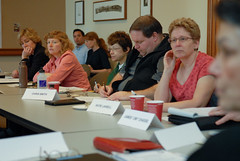 It’s been about a month since we last checked in with the Portland Bicycle Plan for 2030. The plan is slated to be adopted by City Council on February 4th (at 2:00 pm) — a change just made yesterday (to accomodate Mayor Sam Adams’ schedule, so make note of it). But before the plan is ready for prime-time, the City’s Bureau of Transportation still has some work to do. Meanwhile, advocates and business interests are getting their talking points in order.

Project manager Ellen Vanderslice told us today that they’re finalizing changes to the plan with hopes of having a “final draft plan” by the beginning of next week. In addition, Vanderslice says they’ll prepare a detailed report that lists and addresses the 300 or so public comments they’ve received on the plan. In the meantime, PBOT staffers are busy reaching out to various community groups to add to the long list of supporters.

Several aspects of the plan have been changed since it was first unveiled to the public back in October and new sections will be added (download a 12/3 memo from PBOT about the changes). Among the changes are a re-naming of the implementation strategy. Formerly referred to as Tiers 1, 2 and 3, PBOT will now do away with the Tiers altogether and will split their implementation strategy into two levels — the “80% strategy”, which will get a “low-stress” bikeway within a quarter-mile of 80% of Portlanders, and the “World Class strategy”, which will encompass the rest of the plan. Neither strategy comes with a specific timeline. 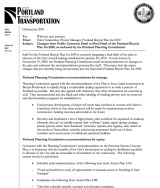 Download a PBOT memo on
changes to the plan.
(PDF, 160KB)

PBOT is also working to add new text to the plan to address cargo bikes and new technologies like e-bikes. There has also been some discussion of how best to add performance measures to the plan. At a recent meeting of the Bicycle Plan Steering Committee, Vanderslice asked members, “How would it actually work if we were to start fresh and ask ourselves ‘what would we need to know in order to know if the plan is working?'”.

On the advocacy front, the Bicycle Transportation Alliance is currently putting together a campaign that pushes for implementation of the plan. The BTA held an invite-only brainstorm session with local bike luminaries last night and they’re expected to share more about their plans at their annual meeting tonight.

On the grassroots level, local bike activist Moses Wrosen (and others) are planning a three-day “Ride for transportation justice and fair infrastructure funding” to coincide with City Council’s adoption of the plan. Wrosen is the man behind the fledgling “5 x 15” campaign, which calls for “5% of Portland’s pavement to be dedicated to non-motorized transit by 2015.”

Business support of the plan is another area where some action is happening (read our recent story, Bikes and the bad for business rap, for more on that topic). The newly formed Bicycle Business League has started a campaign (in partnership with the BTA) to get support for the plan from 100 local businesses. Also, we heard at the recent Bicycle Plan Steering Committee meeting that the Portland Business Alliance (historically a major foe of bike initiatives) has “reacted positively” to the plan.

BikePortland reporter Adams Carroll, who attended the recent steering committee meeting, noted that the PBA “wants bikes off major freight corridors” but that they “see the value of a developed bikeway network”. The PBA is working to coordinate the City’s freight master plan with the bike master plan. Their position is that if major freight corridors (like Sandy Blvd) must be modified to accommodate bikeways, the removal of parking should be the first priority. If a traffic lane must be removed, the PBA wants to make sure the remaining auto lane should is at least 11-12 feet wide. (Stay tuned for a more in-depth look at the Portland Business Alliance’s position on the plan.)

Also figuring into the political context of the Portland Bicycle Plan is the yearly City budget process. With bureau budgets due on February 1st, City Hall staffers are currently in deal-making mode and if a considerable amount of new money for bike projects is to be found, now is the time to get in on some of those deals.

Stay tuned for more analysis and updates on the Portland Bicycle Plan for 2030. Browse our previous coverage here.

Yes! The Bicycle Business League is planning a ride to celebrate community support for the plan. Come and ride with us to see some existing infrastructure and a look at what we can look forward to. We will be talking about points of concern along our route, and the strategies that will be used to make those places safer for all road users.

Come to the Salmon St. Fountain at 11:am on February 4th to ride on a 8-10 mile loop,
or join the re-group at the Salmon St. Fountain up till 1:00 pm for the final ride to City Hall. Hot Drinks @ the meeting spot!
Dates and times for the ride may change if the vote date gets moved again. Stay tuned to the events calendar @ shift2bikes.org