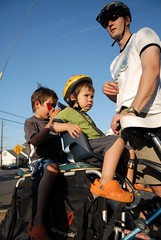 [Publisher’s note: This family biking profile comes to you from our newest writer, Alaya Wyndham-Price. Stay tuned for a bike-friendly business profile and other stories from Ms. Wyndham-Price.]

“We bike whenever we can,” Hau Hagedorn said. I sat with her and her husband Joe discussing their family’s commitment to bike commuting over tea this week. Hau and Joe are both professionals with jobs in downtown Portland, and are also parents of three young boys; Carter, age six, Cole, age four, and Hendrik, just 9 months.

This is the story of how they became a biking family.

The couple began easing into bike commuting about two and a half years ago, after Hau decided to participate in the Low-Car Diet by giving up the keys to the family car for two weeks while Joe was on a business trip. At the time, it meant balancing the schedule of her two older sons, her job, and doing regular errands by bike.

One of the many configurations the Hagedorns can put to use.

The challenge was daunting without Joe, but once rolling, Hau realized how much more biking the family could do. When he returned to town, Joe began riding to work as well. Slowly but surely, the Hagedorns began to make regular bike commuting a goal, realizing that their neighborhood (Overlook in North Portland) was ideal for the transition because everything they need — grocery store, library, restaurants, and schools — are within a couple of miles.

The older boys like being able to pedal and feel like they are a part of the family’s commute.

According to Hau, it’s often a better option to load the kids on bikes because they are either active or at least entertained (depending on the setup they use) as opposed to being bored and fussy in the car. The older boys like being able to pedal and feel like they are a part of the family’s commute. 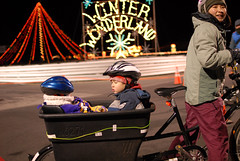 Hau bundled up the kids for
a below-freezing excursion last week.

Let’s face it, kids like to move, and bike commuting is the perfect solution to expending extra beans. (And with three boys, Hau and Joe can tell you: there are plenty of extra beans.)

One thing that really helped them commit to bike travel, explained Joe, was building a ramp and a storage area in their yard (complete with a cemented in, industrial-strength bike rack), which makes bike access super easy — and most importantly, just as easy as hopping in the car.

Friends and neighbors have also been key to keeping the Hagedorns motivated to ride. “We have some good family friends that have been an inspiration, and who have helped us take it to the next level,” Joe explained. 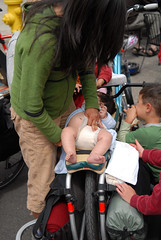 The recent cold weather has posed the greatest challenge for the Hagedorns, who also admit that the total daily commute for the entire family by bike can be overwhelming. From home to Carter’s school, the ride is an easy mile, which Carter looks forward to. From there to the younger kids’ daycare and then on to Hau and Joe’s workplaces downtown, it’s another five and a half miles. This distance can be complicated to navigate, but doable in nice weather. But when temperatures reach down below freezing, it becomes much more challenging to appease the younger kids for the long distance.

“We definitely need to work up to getting braver in the cold,” Joe said. But understandably, when the kids are along for the ride, they aren’t warming up like Hau and Joe who are doing the pedaling. So how do they get to work and school when not riding?

“We’re a multi-modal family,” Hau said. In addition to bikes, they go by bus, train, foot, and yes, occasionally they take the car (although they sold one of them last summer). Often they use a combination of several of these modes of transportation during one commute, but bikes are used at some point most days.

Speaking of bikes, the family’s collection is worth a nod (family-friendly bike nerds beware, you may drool a little). Here’s the full list: The Hagedorns own an Electra Townie with an Xtracycle extension, a Madsen bucket bike, an Adams single trail-a-bike, an Adams tandem trail-a-bike, a Chariot bike trailer, a Bobike mini seat, a Bobike maxi seat, two kids bikes, a Skuut, plus two adult commuter bikes and two adult road bikes. Pfew!

With all of these options at hand, their own custom storage system, and supportive friends, the Hagedorns will be riding in snowstorms before we know it. And even if they aren’t, we still think they are pretty awesome the way they roll right now.

Thanks for a great, inspirational story. I think more and more families are following in their footsteps, simply based on the growing number of regular bikes parked out in front of my daughters’ school. Props to efforts (programs, policies, businesses) making it easier and safer for families to do so. And Hau, great use of the xtracycle (as a changing table) as well. I need to remember that one.

I am drooling over their storage solution. I just have one person and so far only one bike, but my house is TINY with no garage, and I dislike having my bike in the living room. Bike storage can be a major issue for inner-city families with multiple bikes. Would love to see more ideas on this topic.

don’t they know about overpopulation and birth control?

Diaper change as shown is okay, but don’t try that without the spotter(s) on the far side.

Ambitious family for sure, I wouldn’t be toting kids around in this rain though!

Can we get a bigger version of that image in the center? That thing is nuts, it’s like it’s very own bike parade.

Yeah BURR, three more American kids growing up with parents who give a crap, work, and don’t drive them around in their SUV. The horror.

Now that’s my kind of bike stable! Putting the kids down low in the MADSEN bucket, with wool blankets or sleeping bags, and some balaclava action has been the cold-weather solution for us so far. A Bobike Mini windshield helps quite a bit too.

Still working on a kludged up MADSEN rain cover – Matt (http://tacomabikeranch.blogspot.com/2009/12/idle-hands-are-devils-playground.html) and Shane (http://www.flickr.com/photos/shanerh/4109007901/) have some versions in the works.

LOVE the diaper shot. And that green Ibex hoodie sure seems to be the PDX bike uniform.

Fantastic! Sounds a lot like the life Don and I have, using people-powered transportation when at all possible (bus, train, bike, walk) but not going to beat ourselves up if we have to take the car out on occasion. The important thing to remember is that transportation is a choice. We choose what best suits the trip depending on the destination and the weather. Not just defaulting to the car like most of the people in our city.

Also, if I have all that same bike stuff… AND more. Does this mean I’m crazy? I seem to buy bikes like I buy shoes.

Burr, you’re obviously a reason your parents should have practice birth control with a comment like that. This is a wonderful family, with parents that love their kids, and are great examples fot them.

Very cool. Makes my 55 degree weather seem like no excuse not to bike my kids to school.

I’m continually amazed by the adventures the Hagedorns take on their bikes; and wow, that PIR trip must have been chilly!

I’d love to hear more about the bike rack… did you buy or make it?

Hey Hagedorns – we gotta get our muletrains and biking families out on an adventure togther one of these days. You make me proud to be part of the family biking subculture and not so ashamed that I have three kids – and BURR’s not gonna like this – a fourth one on the way. I know, I know, anymore kids and we’ll be extradited to Utah. But that changing table move? The judges give it a ten!

Julian, We’ve been figuring out the rain cover thing for the Madsen, but for now the 4 year holds an umbrella. Kind of silly, but works. Doesn’t solve the issue for the 9 month old in Bobike mini. Thanks for the ideas.

We are always encouraged and inspired to ride more by the stories we hear and the families we meet. Would love to join you on a family biking adventure, Joe. We are in your ‘hood.

Sarah, We bought the bike rack locally. I can give you more details offline.

I love hearing stories of other families biking, and together we can make it a part of our mainstream culture! The more family-friendly bike facilities are, the more accessible they are to everyone.

Can you tell me more about the practicalities of hauling a trailer behind a ride along? Also, what tandem ride along are you using and how do you like it? Any tips on ride alongs?

Fantastic! I have just cycled the 10 miles home from work for the 3rd time this week. Our car died last June and we decided not to replace it. It was only last weekend, however, that I bought a bike ($20 at a garage sale) and then began commuting on it on Monday.

I live in Adelaide, which is a fairly flat city, and we are just in the process of gearing up to do a similar thing to the Hagedorn family. We are looking at converting two mountain bikes with xtracycles and possibly getting a trailer bike. I didn’t know you could get tandems!

Good luck dealing with winter. Our biggest issue is the number of days in summer that are over 100F degrees! Oh well. There is always the bus and train which are both air conditioned.

Are you allowed to pull doubles without an endorsement?

http://www.basil.nl do a rain cover to fit the bobike mini which sits over the windscreen to completely protect your little one from the wind and rain. They list Seattle Bike Supply as their US stockist although this product isn’t listed on the site.

This is a very inspirational story! I’m interested in biking my daughter to daycare and to work. Both are located downtown, but I’m nervous of the narrow streets and high traffic. We have a bike trailer. Any tips on how to ease into this?

@DNA: If you’re coming from the eastside, use the Springwater Corridor, Hawthorne Bridge, Waterfront Park and the Pine/Oak couplet and Broadway as your major thoroughfares (these are either car-free or have buffered bike lanes). Fifth and Sixth aren’t as bad as people claim (particularly since busses don’t turn left off of it in normal circumstances) as traffic is forced to one lane and tends to move slower as a result.