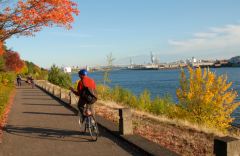 Riding along the river on what
should be a fully connected and
developed trail.
(Photo © J. Maus)

The North Portland Greenway Trail is on the cover of the “InPortland” section of The Oregonian today. The exposure for the project is an important boost to the project — whose backers need more political support to make it a reality.

The story lays out how the trail has made some small steps of progress, but that its actual construction is still far off (the advocacy effort behind the trail is already four years old):

“Even its lead advocate, however, sets 10 years as an optimistic timetable for the Greenway to receive funding and be fully constructed.”

While the trail is mentioned in a number of key city planning documents (it’s also a favorite of Metro) and its benefits as both a recreation and transportation corridor are numerous and sorely needed, it is still languishing in limbo.

Leader of the Willamette Pedestrian Coalition Steph Routh is quoted in the story as saying the issue is funding, which she rightly points out is just “a matter of political will.” Added to funding though, are a myriad of other complicated issues including garnering right-of-way easements from a number of different property owners and navigating through a former toxic waste dump site.

But projects like this are never easy and excuses are always easy to come by. This project — which shares many of the same challenges as its cousin, the Sullivan’s Gulch Trail — lacks more than just funding and right-of-way. It lacks a political champion who will put it on their shoulders and carry it to the front of the line.

We got the Eastbank Esplanade in large part because former Transportation Commissioner and now U.S. Representative Earl Blumenauer and former Mayor Vera Katz made it a priority. It was expensive, scoffed at by critics, and it floats on water for crying out loud! But it got built because Blumenauer and Katz believed in it and helped make it so.

There’s a race for Metro president looming, now would be a great time for one of the front-runners to capture the excitement around either one of these big trail projects and use some of their political capital to push it forward. Or how about Mayor Adams?

Which savvy local politician will make the North Portland Greenway Trail or the Sullivan’s Gulch Trail their legacy?

Love the way you are increasingly calling out folks [politicians] to get the work done. The time for political pandering is over. We are literally running out of time, and it’s just too much Business As Usual.

The Sullivan Gulch trail would also be a very significant improvement in the direction WE MUST GO NOW.

I can hear them now, “such naive comments …”.

I think the shock waves of this latest rise in environmental awareness and volatile fuel prices should be rippling through the offices of the various government and agencies which slow down the progress of these seemingly minor projects, about the time we all die of mass climate change. the wheels of government turn as if powered by old house cats. 10-years? Weak. Obviously power follows money, and there is just not enough money made or spent on bikes to speed the process.

The article is positive but realistic of the challenges we face getting npGreenway built. And Jonathan, you are on point when you talk about needing a champion(s) from elected officials to help carry it forward. But I would like to encourage all readers to go to npgreenway.org and subscribe to the email list, and keep abreast of current developments. When we submitted a grant request for money to do our feasability study a year ago, approximately 200 people submitted testimony by letter and email to Metro, who manages the grants. Another 30+ folks actually showed up to testify at the hearing. The Metro councilor at the hearing was amazed at the level of support, and that support made it easier to approve our grant request.
Politicians and bureacrats are very aware of the power of public support for a project. A large constituancy telling them they need to act accordingly is one of the best ways to move this forward.Please be part of that group. We want npGreenway to be fasttracked and built because it satisfys the needs of so many groups of people, both as a transportaion as well as a recreational trail. When it is built, it will be a shining example of what needs to happen to encourage more of those ‘interested but concerned’ riders to actually use cycling and walking as their preferred mode. And when the rest of the City sees its success, they again will demand more access to separated from roadway trails to meet the needs of their neighborhoods.
When the draft Master Plan was submitted for public comment, many came forward to express their concerns about off street trails not being placed in a prominant position in the plan. PBOT heard that and amended their postion when it came to Planning Commission to remove the tiers that put npGreenway,Sullivans Gulch and 13 miles of separated from roadway facilities in a deferred position. Again, the power of public testimony made that happen.
Please, please…subscribe to npgreenway.org contact list ( the ‘join us’ link on the green bar at the top..) and I promise, we won’t spam you. But we will keep you abreast of whats happening with our trail and when that time comes that we need your support, you will know what you can do to make this vision a reality.

Many thanks, to all of you who are working to make Portland a better place to live and work.

There’s a lot (most) of the trail yet to be built – so what’s the top priority?

ok, I’ll answer with my preference: the link between St Johns and the dead-end slough trail the Port of Portland built, via the old landfill. Ok, and once (finally) the Waud Bluff trail is in, a connexion over to Cathedral Park…

The University of Portland needs to step up and back the North Portland Greenway Trail. The university sits in a prime location to benefit from the trail and influence its development. Come on, U of P, be a good neighbor and lend some of your money, time and political weight to this project.