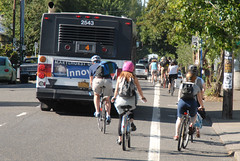 PBOT is looking into a new cycle
track on N. Williams as part of $7
million in bike projects next year.
(Photo © J. Maus)

The Portland Bureau of Transportation is fleshing out a list of bicycle projects worth an estimated $7 million they hope to roll out between July 2010 and June 2011 (FY 2011). That amount — a mix of local and federal sources — is a substantial increase compared to previous years.

The list (download PDF here) includes $2.5 million in revenue from state and local sources and $4.57 million from federal sources. PBOT’s Mark Lear had a draft of the list at the City’s Bicycle Advisory Committee meeting last week and he’s sent us an updated version.


“Hopefully this is the beginning of a sustained increase in both local and federal funding. It represents a massive increase in funding over the last few years.”
— Mark Lear, PBOT

Lear says the list is a summary of projects he and PBOT staff have identified for next year’s capital budget. The list is part of the budget process that dictates all City bureaus must have their capital budgets submitted by December. Having a list of bike projects in mind prior to budget season is nothing new for PBOT, but this year is a bit different for several reasons.

FY 2011 will be the first year PBOT has had what Lear refers to as “significant new revenue” thanks to a new law passed by the legislature (H.B. 2001) that increases the gas tax (for first time since the 1990s) and vehicle registration fees. According to John Rist in PBOT’s budget office, the bureau will receive $14 million in revenue from H.B. 2001 in the next fiscal year. Of that $14 million, $1 million is slated to be spent on bicycle capital projects.

Another new source of local revenue is Mayor Sam Adams’ “Affordable Transportation Fund” which went into effect this year. Adams carved $500,000 out of Utility Franchise Fees (fees paid by utility companies to operate in the public right-of-way) to help pay for new bike infrastructure. 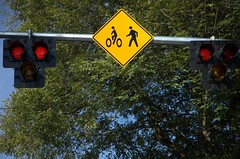 PBOT hopes to install three more
HAWK signals, like this one
at 41st and Burnside, at a cost
of $150,000 each.

Rounding out the local revenue streams are $330,000 from the Community and School Transportation Safety Partnership fund (which comes from traffic fine revenue) and an estimated $670,000 that PBOT cobbles together from a number of sources including the Bureau of Environmental Services (through their “Green Streets” program), TriMet, the Portland Development Commission (through Urban Renewal Areas), and ODOT.

The $2.5 million from state and local sources is a major increase from previous years, and when coupled with a similar uptick in bike spending from federal sources, FY 2011 is shaping up to be a banner year for bike projects.

Among the projects identified for funding next fiscal year are:

Lear says both the funding levels and the projects could be subject to change during the budget hearing process and depending on what happens with the adoption of the Portland Bicycle Plan. But he adds that “Hopefully this is the beginning of a sustained increase in both local and federal funding. It represents a massive increase in funding over the last few years.”

You can download the project list here (PDF, 86kb) We’ll have more information on individual projects as plans and designs materialize.

Someday, there won’t be a penalty for living on the West Side…then again, maybe I need to jump the river, the ‘burbs kind of suck.

Curious about the Rapid Flash Beacon (RFB), I found this 1:38 video by a or the maker. At least as demonstrated there, it’s for attention-getting fast-pulse signaling (using LEDs) that a pedestrian is using a mid-block crosswalk or uncontrolled intersection. It has been found effective in increasing motorist yielding to pedestrians. (USDOT)

you’re in luck because i’m working on a story about them right now. and yes, they do look promising.

according to Roger Geller, speaking at the BAC meeting, the “missing link”on 12th over the highway is putting bikes up on the sidewalks, which are said to be 10 ft. wide. he acknowledged that these sidewalks also get a fair amount of pedestrian use.

I mentioned that while I recognize that a great many of the people he is trying to reach do not feel comfortable on the deck on this bridge, I have no difficulty, and that if I were relegated to the sidewalk, it would no longer be possible to do either of the maneuvers, left or right, from the northbound lanes, that I presently do (taking the left lane to turn left toward 9th, or on a right turn moving immediately into the left lane to turn north on 13th), unless there were an advance signal for bikes.

Geller agreed, saying he intended an advance signal, and (drumroll, please) he thought a sharrow on the deck telling motorists that cyclists are not required to use the sidewalk was also appropriate.

Cycletrack on N Williams? The list only puts the project at $200,000, so it must not be very long. Where?

The last thing that I will be doing when crossing 84 on 12th is getting up on the sidewalks.

Even for the less confident cyclists who may be approaching the “new, improved” crossing from a nearby bike boulevard (that’s the idea, right?), I suspect that negotiating those sidewalks, and the numerous pedestrians who use them, will be daunting and potentially dangerous.

This plan sounds like a very poor substitution for the idea, floating around for years now, of building a bike/ped bridge over the gulch at 7th.

I like the idea of a sharrow on 12th, but feel that it should be enough. Why add confusion to everyone’s life by encouraging some bikes to get up on the sidewalk?

Overall what I have to say is WOW. I do agree with the sentiments re: 12th/I-84. I cross that at least 2-3 times a week and don’t see the issue there though I consider myself an experienced and aggressive cyclist. If anything, I’d rather see something done about the insanity a few blocks down at the Sandy/Burnside/12th mega intersection.

Maybe they could do something about the fact that 12th from hawthorne to sandy/burnside is the best, fastest way to get there, and there’s no facilities at all until sandy/b. Sharrows maybe? that said, I don’t get hassled by drivers very often on that stretch so it may just not be a problem at all.

The “Sandy/Burnside/12th mega intersection” is actually being altered as I type. Sandy is being removed from Burnside to Couch, Burnside will be only 1 way going east at this point, and therefore that intersection will have a lot less insanity. It will still be large but not quite as large.

A regular 3-color traffic signal would have been much better.

A HAWK signal at 39th and Davis (or is it Couch) would rule. There is a marked ped/cyclist crossing there (at 39th and Ankeny as well), but NO ONE stops. It kills me! Often you’ll get the situation where one vehicle will stop but then you’re wondering if the other 3 lanes will stop. It’s really crap.

I don’t mind taking lanes, I’m a super confident biker, I’ve been doing it my whole life, but the one thing that I’m not into is playing Frogger trying to cross a street. Not cool.

With regard to the overpass on NE 12th and preliminary proposal to route bikes on the sidewalk, I think its an awful idea. Benson High School is adjacent to this overpass, and there is, accordingly, a stream of student foot traffic during standard commute times.

The barriers I see for less experienced cyclists are 1) riding northbound on 12th and wanting to make a left down Multnomah or Lloyd (not sure exactly what street) and 2) the reverse trip during the evening / afternoon commute.

Northbound, the problem is mitigated by the right hand traffic lane and its “straigt or right turn only” sign. The straight doesn’t go to a street, but rather a parking garage but most cyclists (and most busses and some motorists as I saw today) use that lane to turn left because the cross street is three lane (two general lanes and a bike lane).

Southbound, there is no issue if you want to continue southbound (most traffice is turning left onto Irving to get to the 84 on ramp), but I can see how an inexperienced cyclist would be wary of getting in the left hand lane to make the turn to Irving given the traffic volume during the evening rush hours. The two current solutions are 1) merge into the left lane with traffic flow (not a problem for all but the slowest riders given that cars are generally qued up and sitting in traffic during evening rush) or 2) two stage left hand turn using the right hand lane and the crosswalk and light at the intersection street (Irving). Seems to me a sidewalk lane would require solution number 2 while having the perception (to folks in autos) that solution number 1 was no longer legal.

This is good news, I guess, but how about a little context? $7 mil sounds like a big number, but how much would PBOT have to spend on bike projects annually for the bike budget (as a percentage of the total spending on transportation) to equal bikes’ mode share?

“Several “missing links” projects including the NE 12th Ave. overcrossing of I-84”

This is the best news ever. The City has basically increased their current funding level up about 14 times. If were ever going to tackle The Bike Master Plan, there is no better time than the present. Until the electric car enthusiast tell me where the electricity is coming from, bike safety infrastructure is more important. I know where the bike power comes from and it’s clean.

Does this mean that the buses aren’t going to cut across the bike lane every couple blocks on williams?

would they switch where the parked cars are and the bikepath to seperate the bikes more from traffic?

It doesn’t seem that Portland likes sharrows, I hardly see them anywhere, especially where they are most needed, i.e. on 20th or 28th in the SE.

They are not a solution, but they would be a lot of help for those of us who need to use these routes to connect between bike boulevards and streets with bike lanes.

Why don’t we use them? We’re only marking the portion of the road cyclists should be using anyway.

50s Bikeway! Yes! That is by far the best route but it’s still a little sketchy in places at this point.

Jim 17 and 18. what do you bet the cycletrack on Williams will be on the left, to avoid the bus stops altogether?